Oracle vs. Google Android trial begins with Oracle on the attack

Oracle vs. Google Android trial begins with Oracle on the attack

Oracle concluded its opening statement yesterday and provided a public link to the presentation slides it used to map out its case for the jury.

As scheduled, Oracle's opening statement began yesterday in its patent and copyright infringement case against Google in a northern California federal court — with Oracle providing the public with a link to the presentation slides it used to map out its arguments for the jury. No surprise, Oracle's case immediately starts off by accusing Google of desperation, deceit and willful disregard for Oracle's intellectual property rights. The infamous 2010 email from Google engineer Tim Lindholm to Andy Rubin takes center stage right out of the gate: 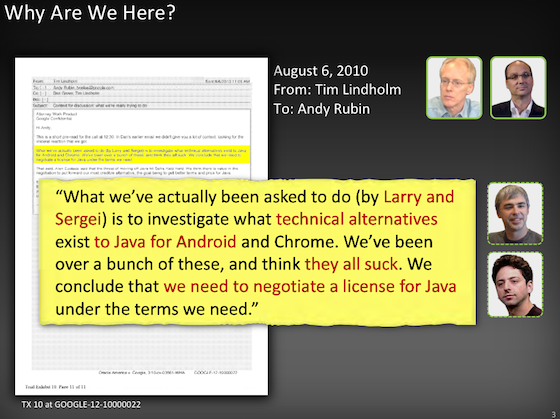 The roadmap goes on to present the background leading up to Google's need to nail down a language to use in developing its then-new Android mobile operating system as early as 2005. The story line behind that period of time focuses on the discussions Google executives Andy Rubin and Eric Schmidt were having with Sun Microsystems — years before Oracle acquired Sun — to implement Java in Android, and the extent to which those negotiations broke down over licensing terms. It's Oracle's contention that this inability to strike a deal on Java, and an inability to come up with a better alternative, led Google to the illegal act of copying Java's APIs and associated class libraries. Oracle uses a series of emails, including a 2005 email from Andy Rubin to Larry Page, to drive this point home:

"If Sun doesn't want to work with us, we have two options:
1) Abandon our work and adopt MSFT CLR VM and C# language
-or -
2) Do Java anyway and defend our decision, perhaps making enemies
along the way."

The presentation goes on from there to guide the jury along the development path of Android, its eventual release in 2008, and the trending global success of Android devices from 2009 to the present.

"They won't be happy when we release our stuff, but now we have a huge alignment with industry, and they are just beginning."

Oracle's version of the story is intriguing and includes what you would expect — everything from allegations of smoking gun confessions to ill-gotten corporate profits. Perhaps most importantly, Oracle was able to present its slant to the jury first as the plaintiff in the case. However, Google's opening statement happened today and rest assured they have a much different take on what transpired in developing Android and what it means in its defense against Oracle's allegations. We'll see what we can do to track down the details of the arguments and trial strategy Google will be employing over the next few weeks.