Google outlined its defensive strategy for Android's use of Java during the company's opening statements in the trial with Oracle.

Share All sharing options for: Google's legal slides paint Oracle as a gold digger, Java as free and open software

Oracle's attorneys have made clear what the company is accusing Google of in its lawsuit over Android, but how is Mountain View planning to defend itself? We took a look through the slideshow presentation that accompanied Google's opening statement, and it paints quite a different picture than the one put forward by Larry Ellison's legal team. Google portrays Java as a language that is openly acknowledged to be free, upon which Google built Android using legitimate means. However, once Oracle's own mobile operating system ambitions fell through, Java became the crowbar that the company could use to pry open Google's wallet in the form of licensing negotiations — ones that ultimately failed.

"Nobody owns the Java programming language."

Google's presentation begins by using Ellison's own words to bolster its argument that Java is free, quoting a deposition from 2011 during which the Oracle CEO agreed with the statement that "nobody owns the Java programming language," and that it is possible for anybody to use Java without paying a royalty fee. It quickly pivots to the topic of APIs, however, which is where the rubber meets the road with regard to the copyright portion of the case. Part of Oracle's accusations are that its intellectual property — in this case, 37 different Java APIs — are reproduced in Android without permission. Google, on the other hand, takes the stance that without APIs Java isn't functional, and that if the language itself is considered free, it's a logical assumption to make that said APIs should be as well. The company again quotes the 2011 depositions, this time turning to the chief architect of the Java Platform Group at Oracle, Mark Reinhold:

"Well, if there were no APIs, we would only have a language. You would be able to write basic computations that never did any IO, had any communication with the outside world or the underlying platform."

Google then moves on to establish a pattern of good intentions, first by referencing a 2006 email from Google's then-CEO Eric Schmidt to Sun's Scott McNealy, where Schmidt suggests the two companies partner around Google's Open Handset Platform, and then by detailing a list of Android's open-source bona fides, including its Linux kernel and use of WebKit as a browsing engine. The core of the dispute, however, falls back to those same 37 APIs. Google offers several examples where the APIs within Android differ substantially from those featured in the Oracle JDK. Of course, in its opening presentation, Oracle was able to provide examples where they were nearly — if not exactly — identical. 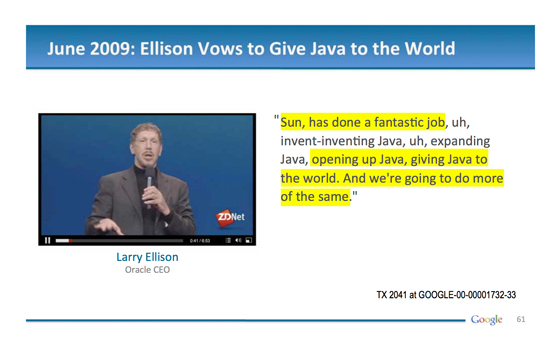 A critical turning point in Google's narrative timeline is the acquisition of Sun by Oracle. Google offers several examples of Sun CEO Jonathan Schwartz offering praise for Android's utilization of Java — both publicly and privately — presenting them as clear endorsements of the Android team's efforts. Ellison is again quoted, praising Sun's accomplishments in keeping Java open, and pledging to do the same in the wake of the company's acquisition by Oracle. He even calls the continued growth of Android "very exciting," a tacit admission of support in Google's eyes.

Then Google goes on the attack. An email between Ellison and McNealy, in which Ellison outlines a plan to build a Java-based iPhone competitor, serves as the jumping-off point. Google notes Oracle's inability to launch a successful smartphone project, including the failed "Project Java Phone" initiative. Ellison himself testified this morning that Oracle considered purchasing Palm or RIM to enter the smartphone market; neither option came to fruition. The only remaining alternative, suggests Google, was for Oracle to try to sell its wares for use in Android, leading to the lawsuit now playing out.

It's a dramatic story from both parties, but no matter what the narrative, the case still seems to be one that comes down to simple matters of copyright. If the judge agrees that Java and other programming languages are protectable under current copyright law, and the jury finds that Google did indeed copy code, it's unlikely that any number of intentions or motivations from the involved parties will factor into the end result. Then again, Google is quick to point out that the offending APIs constitute a dramatically small portion of Android's 15 million lines of code, providing it one final out in the form of a de minimis defense — where the infringement is actually too small to warrant punishment. The trial is scheduled to run up to 10 weeks, and anything can happen in the meantime; we'll be there to bring it to you when it does.