Share All sharing options for: 'Sketch Nation Studio': create and publish an App Store game right on your iPhone (hands-on)

Sketch Nation Studio is a free game creation tool for iOS that was launched today by Engineous Games. The company previously released the similar Sketch Nation Shooter, but Studio expands its reach to cover some of the most popular styles of games in the App Store today, such as Doodle Jump-style vertical jumpers and horizontal runners in the vein of Canabalt. What's more, users will have the opportunity to publish their creations on the App Store proper, with Engineous taking a 35 percent cut of revenue on top of Apple's 30 percent. We've spent some time with the app — will it open the gates to a new generation of iOS developers?

You get 35 percent of your game's App Store revenue

As Sketch Nation Studio is targeting people who've never written a line of code in their lives, the interface is understandably basic. Firing up the app for the first time launches you straight into the Simple mode of creation, which lets you get to grips with Sketch Nation Studio's creation tools. You can draw in-game assets (power-ups, enemies, your main character etc) directly on the touchscreen, import them from your photo library, or sketch them out on paper and scan them in via the camera.

This last option is the coolest, but also the most temperamental. The app warns you that lighting conditions are very important, but even when taking pictures in the sun I found it incredibly difficult to get all my strokes recognized, and simple stick figures had to be enclosed in circles before the app would detect them. The Advanced creation mode isn't a huge departure from the Simple mode, and the interface is nearly identical in both — it's quite clunky, requiring several taps to select basic options and suffering from a cluttered visual style. There are some good ideas here, but the software could use some work, and while the app is universal the iPad interface is simply a blown-up version of what you get on iPhone. 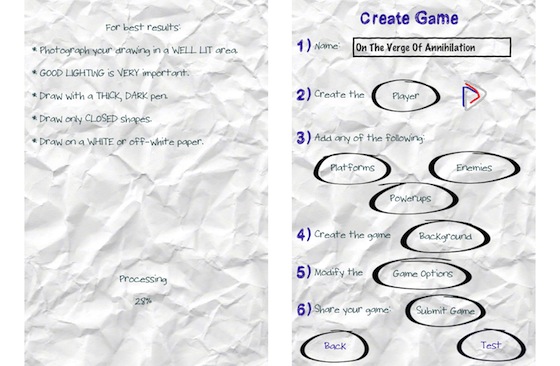 Drawing and photo library import both work well enough, the former option's tools falling more on the side of Draw Something than a sophisticated app like Brushes, and the latter having a few problems with complex images but managing to process simple pictures easily.

'Draw Something' aficionados will be right at home

Once you've selected appropriate imagery it's easy to make a simple flying game in minutes — mine involved piloting a roughly-sketched Verge logo through some flying Mayan temples, and I called it On The Verge of Annihilation. Unfortunately you can't animate your character beyond adding some simple effects around it, which takes away much of the appeal of running games, at least. Allowing for just a few extra frames of animation would go a long way to giving your creations a more dynamic and personal feel. Engineous Games skipped over audio almost entirely, too, limiting you to some pretty awful preloaded tunes.

The biggest problem with creating games in Sketch Nation Studio is that you're very much working to Engineous Games' templates. You can't really change how objects in your games behave, and there's little scope to do much of interest with the scoring system. More templates are on the way, but I don't think that'll do much to fix the ultimate lack of control you feel when creating games in the app — it's closer to something like LittleBigPlanet on PS3, which fell somewhere between level editor and game creation tool. Of course, that can be a lot of fun in its own right, and for free Sketch Nation Studio is certainly worth a download if you're interested. I just wonder how many quality games will be produced with the app, if any — Engineous Games plans to curate the best before submitting to Apple, but the bar for 99-cent games on the App Store is already pretty high.