A new report from Nielsen shows that dramas are the most popular primetime genre, both during regular and timeshifted viewing hours.

According to a new report from Nielsen, dramas are the dominant primetime genre on television in the US. The report looked at five different genres from the time slot and found that dramas accounted for 44 percent of viewership, followed by sports at 22 percent and reality shows at 16 percent. Drama's share of the viewers gets even bigger when it comes to those who save shows to watch later: 58 percent of timeshifted viewing is for dramas, compared to 16 percent for sitcoms and 14 percent for reality TV.

Unsurprisingly, these numbers also mean that dramas receive the biggest chunk of advertising money, which in 2011 added up to a cool $4.9 billion (out of a total of $14 billion). However, sports aren't too far behind with $4.1 billion, a relatively large number considering the genre gets half the number of viewers. The only place that drama didn't come out on top in the report was in terms of product placement — reality TV took top spot there, with 4,664 instances of product placement accounting for 58 percent of the primetime slot. In spite of this, the most memorable placements actually took place on sitcoms — more people remembered the time that Sheldon from The Big Bang Theory used Purell than any other product featured last year. 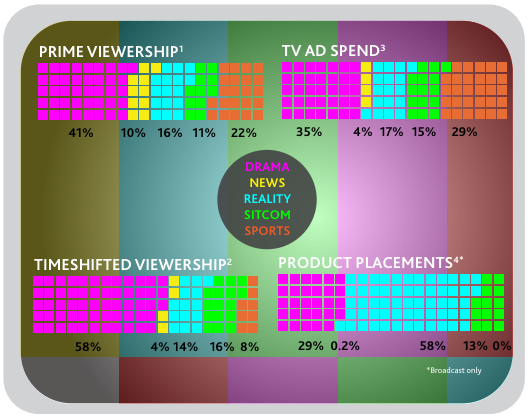