Disclaimer: I was originally not going to post this video due to focusing issues but I decided to anyway. Also, please know that I was very sick during the recording of this video, which is why I blunder a bit and look so terrible. Also, it was taken between classes.

So, you want to be a road warrior with your MacBook / Pro 13 or MacBook Air? HyperMac will sell you an external battery, but it'll cost you $250. If you are like me and don't mind getting down and dirty with a soldering iron, you can make one yourself.

In the video I only use one CCTV battery, which does work, but because of voltage droop on the battery the car charger will power off after about half of the battery is depleted. This is actually a good thing, since it prevents strain on the voltage regulator which, if this fail safe were not present, could overheat the regulator. To remedy this, attaching two CCTV batteries in parallel with a diode between each battery will allow for a much higher current draw before the voltage droop takes effect. The blocking diodes prevents current from traveling back into the battery. This could happen if you were to use one charged battery and one depleted battery. 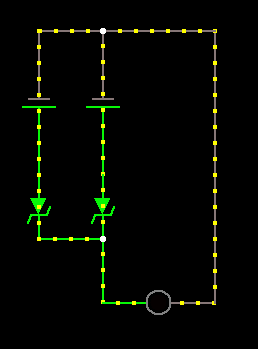 The two CCTV batteries are the parallel lines that do not touch at the top left. The 12v blocking diodes are directly below the battery in the circuit diagram, indicated by the downward pointing triangles. The outputs of each diode are soldered together, and then lead to the black and gray ball which represents the positive and negative wires on the car charger. Both of the ground wires should be soldered together to provide a common ground, and it is especially important that you do not ground the circuit on just one battery.

Combined, both batteries will yield 19600mah at 12v. Since the MacBook runs at 15.5v (nominally) the battery capacity will be less, not to mention the power lost as heat in the car charger (this is normal for all voltage regulators). I have provided a link to a pack of 5 10 amp blocking diodes. Using one on each battery will ensure perfect safety for each battery.

One thing to keep in mind is that you will not get 60 watts out of two batteries. This is ok, it just means that your MacBook battery won't charge as fast as it will on your home charger. In fact, it may not fully charge your battery at all, if the MacBook is running. What it will do is keep you running for longer. Right now, my MacBook (which is fully charged and running from the power supply) is only using 0.21 amps at 120v, or 2 amps at 12v. So if you do the math, that only comes to 25 watts of power to actually run the MacBook, which means that each battery (at 9.8 amps for 1 hour) can theoretically power the MacBook for 5 hours. The math looks like this:

In reality, accounting for voltage droop and the inefficiency of the voltage regulator the math looks like:

The last thing to consider is safety for your MacBook, which is a valid concern. However, you should rest easy as car chargers are designed to take the incredibly dirty power from a car battery (ranging from 11-18v) and convert it into clean, steady output for your MacBook. This is why my charger cuts off after the single CCTV battery droops below acceptable levels.

I suggest taking both batteries and car charger and velcro-ing them to the inside of a CD wallet with the CD sleeves taken out.