Outlier: creating the most high-tech pants you've ever worn

At the PSFK conference in New York, Outlier clothing company founder Abe Burmeister spoke about the origins of company, disrupting the conventional clothing sales model, and how he's creating the next generation of mens pants.

Share All sharing options for: Outlier: creating the most high-tech pants you've ever worn

Outlier is a New York-based company that makes really nice pants for the modern urban man: they're as comfortable as pajamas, water resistant, smell-proof, and handsome — all due to some pretty cool technology created by Swiss fabric alchemists Schoeller Technologies. In a talk Friday at the PSFK conference in New York, we heard the whole story of how Outlier was founded. Five years ago, New Yorker Abe Burmeister decided that he needed some new pants. He'd ripped through every previous pair of jeans he'd owned through biking to work every day, so he went on a grand adventure to find the perfect pair of agile yet classy pants. All he came up with after a year of looking was a pair of Swiss shorts made of some moisture-wicking and stretchy material he'd never seen before. He called up the shorts makers, who said they had no intention of selling any pants. So Abe Burmeister decided he'd just make his own pants, even though he knew nothing about pants. 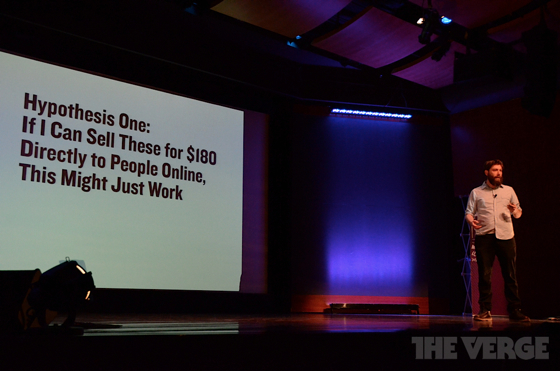 He needed a pair with the pliability and water resistance of the shorts he found — pants he could wear every day and not worry about them getting wet, dirty, or smelly. Burmeister contacted Schoeller, the Swiss fabric maker who sold fabric to the shorts company, who agreed to sell him some of its high-tech double weave tweed fiber. It's 80% nylon, and includes some fancy patented technology like "NanoSphere" self-cleaning fibers that keep your pants feeling fresh. Burmeister then found himself in New York's crowded garment district with some Schoeller fiber and some cash. He walked out with the first pair of "OG" pants ever made.

"A well-designed product sells itself."

Some time later, Burmeister decided he needed to create another pair of pants, and perhaps even a company to sell them. Being a graphic designer and all, he could create a nice logo, but he didn't know a thing about running a business. Burmeister stumbled upon Tyler Clemens, who was trying to do the same thing he was doing, but with shirts. The two came together and formed Outlier, a company to build clothes they wanted to wear every day, founded on three hypotheses.

Hypothesis one was to build a pair of pants for $180 that cuts out conventional middlemen in a city where quality designer clothes get marked up hundreds of dollars by retailers. Hypothesis two was that a well-designed product sells itself, which almost sounds like a Jobs-ian mantra. Hypothesis three was that the internet is disrupting the way products are designed simply because it enables creators to sell products anywhere in the world. Outlier's first customer was in Australia in the middle of the night after the company launched its website. Outlier sells 30% of its merchandise internationally, which is lucrative because "you can sell it for cheaper online," Burmeister said, "and you don't even need salespeople."

Outlier thinks of itself as a disruptive company because it operates online and doesn't have its own store. In fact, the Outlier website looks more like a Tumblr blog than an e-commerce site, selling products to people who appreciate good design and want to wear well-crafted clothes that won't wear out after a few months. Burmeister said, "I knew nothing about making clothes five years ago. And the same thing can work with any industry."

You can find Outlier online at outlier.cc and on Twitter at @Outlier.