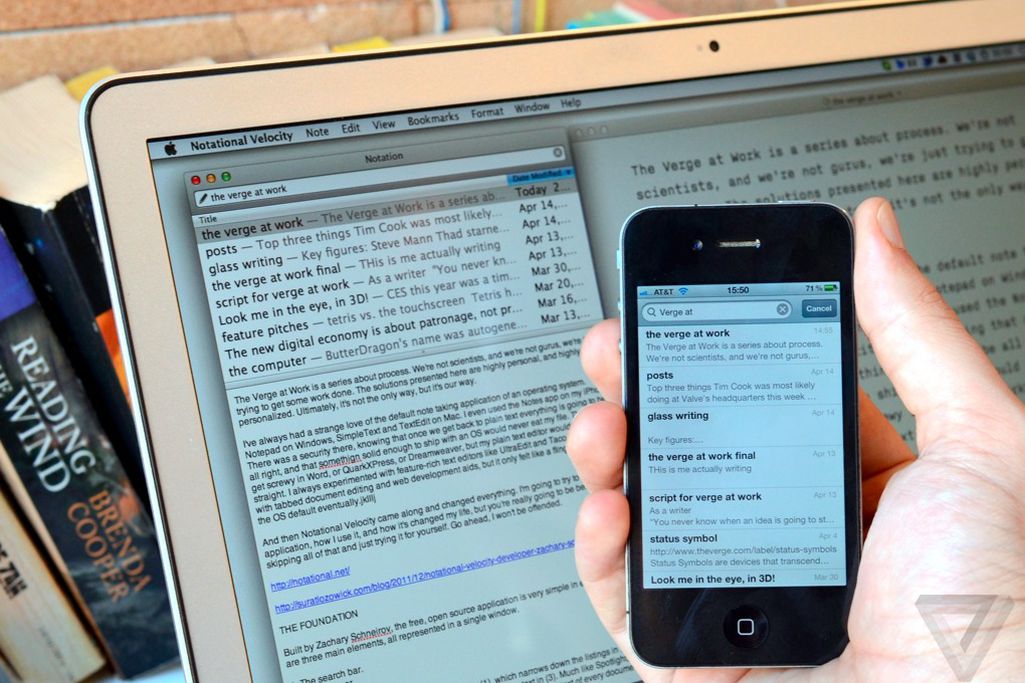 The Verge at Work is a series about process. We're not scientists, and we're not gurus, we're just trying to get some work done. The solutions presented here are highly personal, and highly personalized. Not the only way, but our way.

I've always had a strange love of the default note taking application of an operating system. Notepad on Windows, SimpleText and TextEdit on Mac. I even used the Notes app on my iPhone. There was a security there, knowing that once we get back to plain text everything is going to be all right, and that something solid enough to ship with an OS would never eat my file. Things could get screwy in Word, or QuarkXPress, or Dreamweaver, but my plain text editor would set things straight. I always experimented with feature-rich text editors like UltraEdit and Taco HTML Edit, with tabbed document editing and web development aids, but it only felt like a fling: I'd be back to the OS default eventually.

And then Notational Velocity came along and changed everything. I'm going to try to explain the application, how I use it, and how it's changed my life, but you're really going to be better off skipping all of that and just trying it for yourself. Go ahead, I won't be offended.

Note: Notational Velocity is a Mac app, but there are plenty of clones and alternatives for other platforms. The obvious Windows equivalent on Windows is ResophNotes. It's not pretty, but it works great. 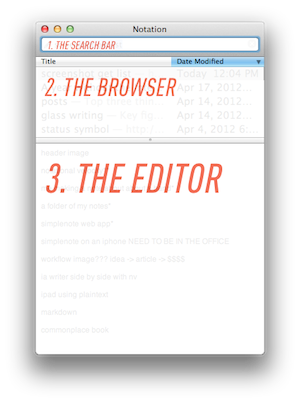 Built by Zachary Schneirov, the free, open source Notational Velocity (I like to call it "Notational V" when I'm among friends) is very simple in execution. There are three main elements, all represented in a single window.

It all cascades very nicely: you start typing into (1), which narrows down the listings in (2), and when you make a selection then you can start editing the text in (3). Much like Spotlight, the search bar isn't just searching document titles, it's searching the full text of every document in your notes library. Unlike Spotlight, new files are indexed instantly.

Where Notational Velocity gets really fun is that if your search string doesn't match the name of an existing note, you can hit enter and start a brand new note with that string of text for a title. Bam, instant document generation.

You can of course make documents about whatever you'd like, and however many you'd like (I currently have 494 notes, including this one), and they all remain totally searchable from a single view. Zachary Schneirov recommends using it for short, highly specific notes so that the search doesn't get too many false positives. He acknowledges, however, that many people (like me) use it to store much more expansive documents, and the app holds up well under that sort of pressure. For instance, I have 30,000 words worth of a novel in a single "note," clocking in at 157KB, and I also have a 17 Byte document called "Cocktails" that names two different Manhattan cocktail establishments that were recommended to me.

On its own, Notational is a super smart rethink of document management and creation. An optimized, jumpstarter of a workflow, which I think is a work of art in UI simplicity. Still, it’s not a life-changer for most people. Where the real magic happens is Simplenote. 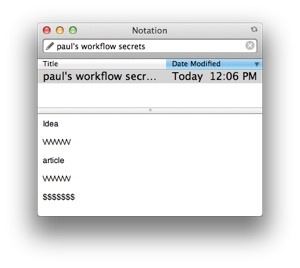 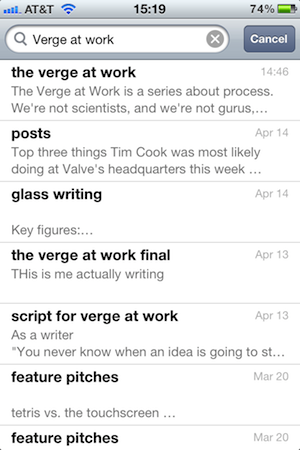 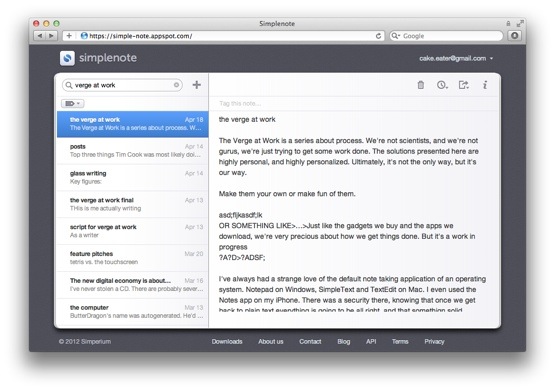 Simplenote is a cloud-based notes app, with a setup that owes much to Notational Velocity's straightforward design: A simple list of all your text files, which can be narrowed down through search, next to a pane for viewing the text of the selected note. It's nice enough on its own, via its default browser view, and offers a mobile app for iPhones and iPads. But better yet, there's a free API that's been tapped into by numerous desktop and mobile apps on a number of platforms, including Notational Velocity.

A simple visit to your Notational Velocity preferences starts the syncing — which is rapid, though not instantaneous. Now any note you add or edit in Notational Velocity is shot up to Simplenote, and when you open Simplenote on your iPhone (or another compatible app of choice on another platform of choice) the changes show up in about 30 seconds, once both ends of the process have synced to the cloud.

This simple persistence of note-taking has seriously impacted my life. I used to take notes religiously in my iPhone's default Notes app, and before that I'd take notes religiously in my Nokia's default Notes app. I've never successfully taken handwritten notes, but in essence I wasn't far removed in process, despite my technology veneer. When I needed to reference a note, I'd typically prop the phone up next to my laptop for reference, trying in vain to keep the screen awake while I picked the best parts from my note and put them into a "real" document. Now, thanks to Notational V and Simplenote, I have a single, continuous note-taking experience, which flows effortlessly into my actual writing process.

Here's an example of how this works for me professionally:

That's the basic pattern, and it's served me well for the past year or so. Of late, however, I've added a couple fun new tweaks.

It's such a nonsensical vibe-ey thing, picking a "no-frills, distraction free" text editor, but I like iA Writer on the Mac. When I really want to get serious about some text, I hit Shift-⌘-E in Notational Velocity (the "edit with" command) and it pops the note open in iA Writer. Thanks to auto-saving, I never worry about versions or where the file lives… I just edit as I would in Notational Velocity, and close the window when I'm done with iA Writer's fancy presentation.

Word of warning: For iA Writer to work with your notes, they have to be in plain text format, and preferably in a folder instead of tucked away in a database. 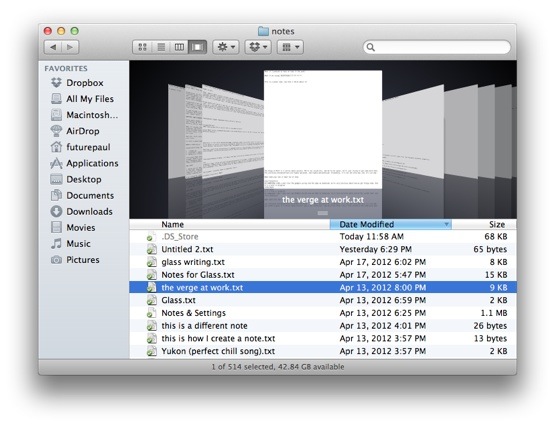 It took me a while to come around on this one, but you can learn from my mistakes. By default Notational Velocity stores all your notes in a single database (which offers optional encryption, for the security-minded). You can, however, choose to have your notes simply stored as plain text (or rich text, or HTML) files in a folder. I simply put that folder in Dropbox and now I have a redundant backup solution — Notational Velocity syncs with Simplenote directly, and Dropbox syncs the folder of notes separately. 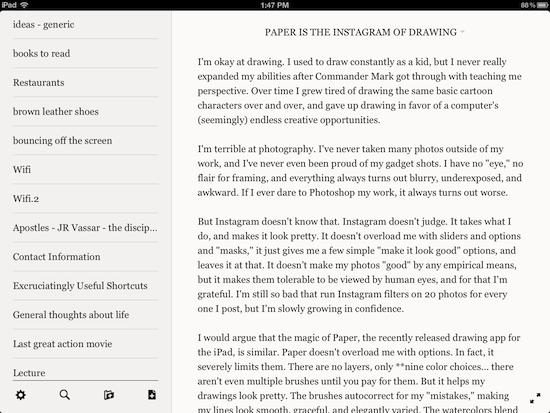 What's extra nice about working Dropbox into the sync flow is that Dropbox has become the defacto method of getting documents onto an iPad. Almost all of the myriad text editors on the iPad (including iA Writer and my personal favorite, PlainText) include Dropbox integration. While most of them lack decent search options, which keeps me coming back to Simplenote for sifting, if I know what doc I'm looking for it's simple to browse my notes folder and start editing in my app of choice.

Word of warning, pt II: Because the actual syncing between Simplenote and Dropbox happens on your computer, not on the iPad, you won’t be able to jump between edits in your non-Simplenote app and Simplenote during an iPad session unless your Mac is awake and syncing stuff as you go. It’s best to pick one tool and stick with it for a session, and then let Notational V, Simplenote, and Dropbox sort it out later.

Word of warning, pt III: Every once in a while you read reviews of iPad text editors where someone is screaming something like "THIS APP WIPED ALL OF MY DROPBOX!?!?!?!" … don’t download those apps. Not every API-implementor is created equal.

I don't use Android, but a lot of my friends use Flick Note on there and they say it works great with Simplenote. I'm actually a little jealous of the way it handles plain text to-do lists.

Make it your own

Make it your own 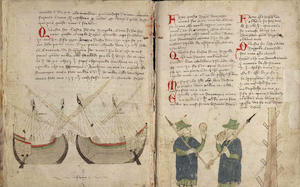 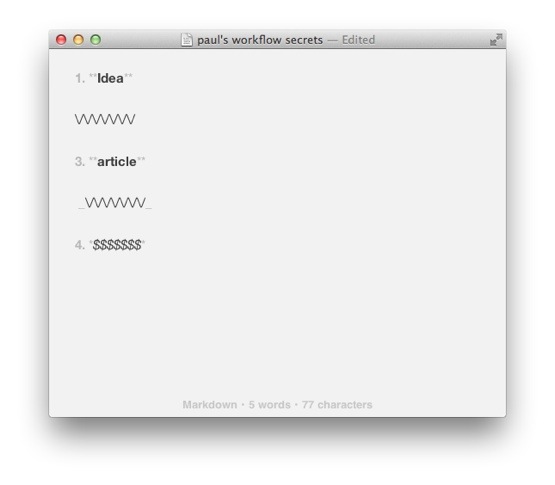 I'm obviously a writer, so I've built my workflow around writing in plain text. Meanwhile, many people use Markdown for formatting, and lucky for them, there are forks and clones of Notational that support Markdown (nvAlt and ResophNotes quickly come to mind), and of course tons of Markdown-friendly text editors that can read from that Dropbox folder.

Also, I'm a Mac / iPhone / iPad user (I know, I'm the WORST), but if you're not you're still a cool person and able to benefit from this workflow. There's a list of Simplenote-compatible apps at Simplenote's own website, so I'll let you track down your platform of choice there.

I'm also aware that people that deal with other media, or other file types (like Word docs, PDFs, images) aren't going to be fully served by this workflow. Multimedia alternatives (though not, sadly, equivalents) include Evernote and Yojimbo. I suppose the "dream" is iCloud integration, but its per-app silos might keep a vibrant ecosystem like the one that surrounds Simplenote from blossoming. Anybody want to teach one of these catch-all filing apps to speak to Dropbox? Teach it to sing?

Finally, a slight guiding principle in my method of note taking is called a "commonplace book." Basically, it's about organizing found snippets of literature, thoughts, quotes, and instructions by category. Sadly, I don't hold to this pattern very well — for instance, I'm always forgetting to file away much-loved (and quickly forgotten) book passages, or snippets of conversation I overhear. Still, Notational Velocity is the perfect tool for pulling it off, if you want to give it a shot.

My ultimate concept here is that whenever I have an idea, I can easily record it, and whenever I want to write I have easy access to my ideas. In the midst of a constant flow of information and communication that stems from living life in the 21st century, Notational V offers represents a "safe" place where I hide away the gems I want to dwell on past their 5 seconds of Paul Miller Brain Time. My long term memory may be lacking, and my capacity for sustained attention is minor, but Notational V helps me pick up where I left off.