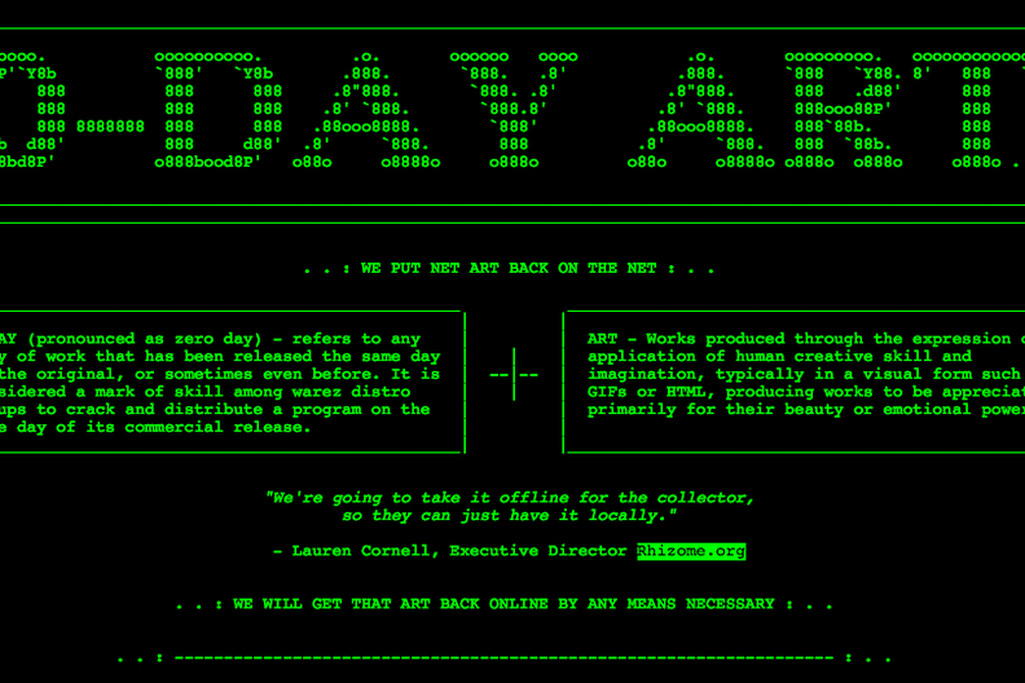 With online storefronts dominating the mobile market, it’s safe to assume that most people who own digital devices have some experience with the concept of micropayments. But now that we’ve grown accustomed to the idea of shelling out tiny nuggets of tribute for things like apps, games and music, are we willing to do the same for art?

Art Micro Patronage is hoping for the best. The website, an online gallery experimenting with new methods of monetizing artwork that uses the internet as a medium, recently launched C.R.E.A.M., its last in a series of online exhibitions of animated GIFs, web pages and other net-based artwork that asks visitors to contribute small amounts to individual works. In doing so, patrons are granted access to them after the exhibition “ends” and the works are removed from public viewing.

0-Day Art, a warez release group for internet art, has other ideas. On the day of the exhibit’s premiere, the group released a torrent enabling all of the featured works, including all those from previous Art Micro Patronage exhibits, to be downloaded for free. It wasn’t the first time: the torrented exhibits were part of the group’s ongoing efforts to “put net art back on the net,” a mission that mixes old-school software pirate sensibilities with an underlying drive to preserve digital works for the general public, even if that means wresting control of those works from the artists themselves.

Headed up by computer artists Jeremiah Johnson and Don Miller, 0-Day Art was created in part as a response to a controversy that surfaced last year. In a video posted by Hyperallergic’s Hrag Vartanian, Rhizome Executive Director Lauren Cornell spoke from her booth at the 2011 New York Armory Show, where she was selling animated GIFs created by Los Angeles-based artist Sara Ludy.

This in itself was nothing new — notable web artists like Tom Moody had been selling their GIFs for years, and Paddy Johnson of Art Fag City, among others, have curated their own GIF exhibits in the past. What artists like Johnson and Miller took issue with was the method of sale Cornell had mentioned, which specified taking the work offline "so the collector can have it locally."* 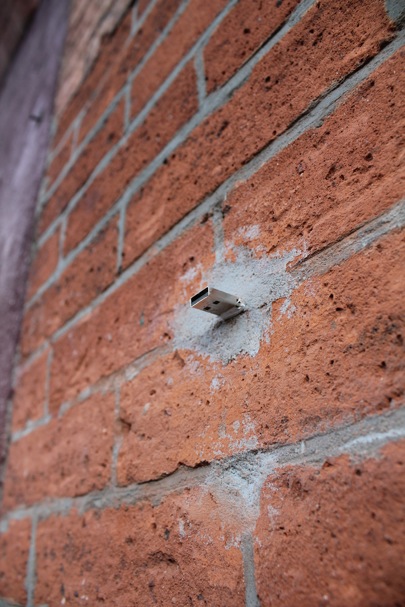 Months later, an exhibit curated by web artist Michael Manning entitled "Street Show: The Things Between Us" responded with its own take on the issue: Using "dead drops," an offline filesharing network made up of USB thumb drives physically installed in public spaces, the exhibit required visitors to obtain works from a drive cemented to the brick wall outside of the Eyebeam technology center in New York City. There was no special protection on the drive, so anything could happen. New files might be added or existing ones modified, or the drive's contents could be deleted, if a visitor was so inclined.

Concerned that the originals might be lost forever, 0-Day Art stepped in and made "The Things Between Us" their first target. Miller, who writes open-source software for the original Nintendo Entertainment System under the alias No Carrier, had been working at Eyebeam as an artist-in-residence at the time, guaranteeing that the entire show would be available online the day it went up.

In the software piracy scene, "0-day" refers to software that is leaked and put on the internet the same day it is released commercially; 0-Day Art has set out to do the same for the art world, sabotaging attempts to contain the spread of GIFs and other precious creative works.

To Johnson and Miller, an approach to digital art distribution that is steeped in the language and methods of traditional, non-digital art is inherently messy, counterintuitive, and ultimately, futile. "In treating digital works as you would a physical work, you’re really neutering the power of those works," said Johnson, aka Nullsleep, during a presentation earlier this month at Eyebeam. He notes how a large part of what makes digital works unique is their ability to be easily replicated, remixed and shared. “To try and shoehorn it into the physical world and make it comply with the norms of the gallery system or the art world basically seems like what the mainstream music industry and record labels tried to do for years and years once digital music started being distributed."

These same ideas about the nature of digital content have come up time and again since the earliest days of home computing. Even before the internet, in the 1980s, the warez scene existed through dial-in BBS services that allowed users to download and share cracked games and software over regular telephone lines, albeit very slowly. Many of those who did the actual cracking did so competitively, and as Miller points out, would often go as far as to credit themselves alongside the software’s publisher in the custom “cracktro” screens they packaged with their releases.

Today, with high-speed connections and accessible technologies like Bit Torrent, the debate rages on with higher stakes than ever before. This is seen most vividly in the recent attempts by multi-billion dollar content industries to reign in piracy, believing that heavy-handed legislation like SOPA and PIPA could put a stop to copyright infringement once and for all. But those who rallied against them knew the truth: that piracy could never be truly contained, because the nature of digital content was one of duplication, sharing, and re-appropriation.

The C.R.E.A.M. exhibit was particularly in line with 0-Day Art’s free culture mantra, since all of the works it included are intended to act as commentary on these very issues. Some, like David Horovitz’s “Fifty-Eight Cents,” draw inspiration from existing models like crowdfunding. Others riff on various forms of Digital Rights Management, like Kim Asendorf and Ole Fach’s “The $20 File,” which generates and verifies a unique text file for each individual viewer.

From "All Distances Reduced To Zero" by Jeremiah Johnson

Lindsay Howard, the exhibit’s curator, says she was skeptical about the Art Micro Patronage platform from the beginning. Citing a 2003 essay by Clay Shirky in which he describes the trend towards free content as “an epochal change, to which micropayments are a pointless response,” she says she agreed to curate the show primarily because the site’s co-founders didn’t intend it to be a “be-all, end-all” solution. Rather, the goal was to encourage conversation about the monetization of net art, and acknowledge the various challenges it faces — 0-Day Art being prime among them.

“I'm not interested in creating artificial environments that force art work down people's throats,” Howard told me in an email after the Eyebeam presentation. As lead curator of the 319 Scholes gallery in Brooklyn, she has curated a number of shows which explore the intersections of technology and art. “0-Day Art knows how freakin' A-B-C simple it is to rip stuff online, and it's ridiculous to pretend otherwise.” She points to the writings of Nick Szabo, who predicted in 1996 that micropayments would fail because the associated “mental transaction cost,” or the effort required to decide if something is worth buying, was too high – the only effective alternative, wrote Shirky, is theft. 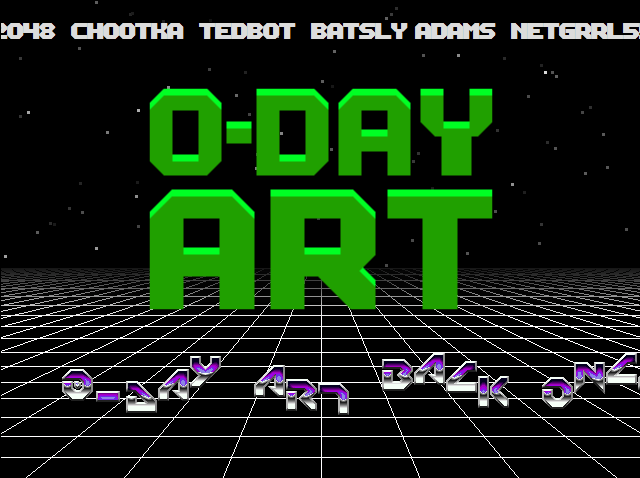 It is seemingly ironic, yet perhaps by necessity, that Johnson and Miller are both active participants in the very culture they are bent on disrupting. So it should come as no surprise that 0-Day Art’s torrent file of the Art Micro Patronage exhibits is itself one of the works Howard curated for C.R.E.A.M., accompanied by their own animated cracktro done in the style of the software pirates that came before them. Johnson says that all of the contributions 0-Day Art receives through the site will be donated to free culture-supporting organizations like the Electronic Frontier Foundation, Creative Commons, and of course, The Pirate Bay.

As for the rest of the artists, 0-Day Art maintains that their activities are meant to help, not hinder, the authors of digital works. It’s obvious not everyone agrees: during Q&A, one audience member asked the group how they can distribute the work of artists without permission and still claim to respect them. “If you’re anyone and you’re putting anything online, and you expect to have control over that after you put it online, you’re delusional,” Johnson responded. “I don’t see holding a mirror up to someone’s delusion as disrespectful. I see it as helping them get in touch with reality a little bit more. In that sense, I think that is respecting that person.” 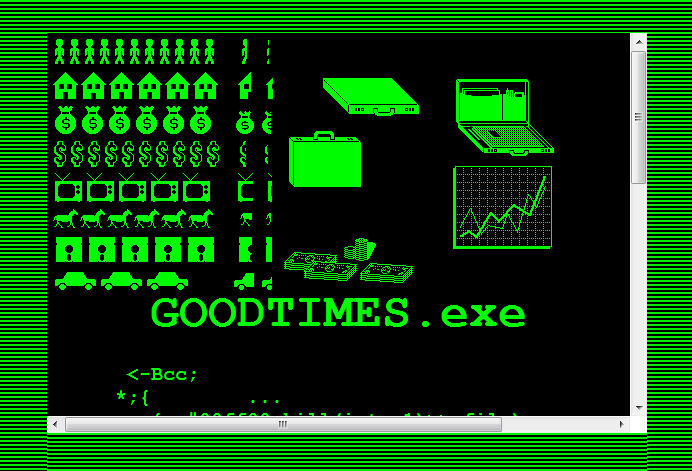 From "Goodtimes" by JODI

But what about when the artistic vision for a work involves limited access to that work? The group says that if such control is so important to the work’s integrity, the creator “must possess the technical skill to back it up.” Johnson points out “The $20 File,” the aforementioned work by Kim Asendorf and Ole Fach, which was the only part of the C.R.E.A.M. exhibition that 0-Day Art was unable to duplicate for their torrent. At the end of the day, the best way to make a living as a digital artist, says Johnson, is to “find a way to make people want to support you,” rather than erecting paywalls to try and contain the spread of your work.

0-Day Art doesn't expect artists and institutions to stop experimenting with monetization as a result of their activities. In fact, they openly encourage them to keep trying. "If they do, it just gives us more targets," says Johnson with a smirk. The group fully embraces their station as the trolls of the net art world, and hopes their provocations will encourage further discussion of these issues.

The debate surrounding 0-Day Art exists as part of a larger, ongoing conversation about where our intellectual property ends and the nature of our digital networks which contain it begins. Looking at the increasingly aggressive methods being employed by copyright industries to shut down filesharing services like Megaupload, it’s clear we are far from reaching consensus. But from the vantage point of the relatively agenda-less world of net art, there is much greater hope for civil discussion and exploration.

Howard later went on to clarify that no artist has yet complained about 0-Day Art copying and distributing their work. “The artists who feel most current and relevant right now are the ones who acknowledge, and work in favor of, not against, that current,” she wrote. “I think we all realize that piracy, trolling, and re-appropriation are realities of contemporary life.”

*Update: Lauren Cornell reached out to us saying that Sara Ludy's work was taken offline at the request of the artist, and that it does not reflect Rhizome policy. Cornell further pointed out that it is Rhizome's goal to preserve digital work, as the group later outlined in a paper entitled Keeping It Online.