Dropbox update adds public link to any file or folder

Share All sharing options for: Dropbox update adds public link to any file or folder

If you want to share files with a friend using Dropbox, they're forced to sign up, download Dropbox, and sync your files to their computer. Today, just hours ahead of Google's speculated Drive app launch, Dropbox announced new public sharing links that will let users share read-only folders with anyone. Link recipients can view and stream files from the shared folder, all without signing up for Dropbox or installing the client. Additionally, files you're linking no longer need to be in the Public folder within your Dropbox. You can use the new public sharing links by right-clicking a file or folder and selecting "Get Link" within the Dropbox menu, which makes your file/folder public, but only using the link Dropbox generates and copies to your clipboard. Links cannot be set to expire — you'll have to make them private again yourself using Dropbox's website.

While some competitors already have this feature (like SugarSync and LogMeIn's new Cubby service), it adds a new dimension and degree of accessibility to Dropbox, the mindshare leader in the file-syncing space. It also instantly pits Dropbox against file-sending solutions like YouSendIt. "The idea for this kind of sharing was prompted by Dropbox customers," CEO Drew Houston told Forbes. He also hinted that a photo auto-upload feature would be making its way to iPhone sometime soon. This means that the Dropbox app for iPhone will soon let you shoot pictures in-app and instantly upload them. As of right now, the most current version of Dropbox (for Mac, at least) is 1.2.52, which does not include the new feature. We'd expect it to go live at some point today. 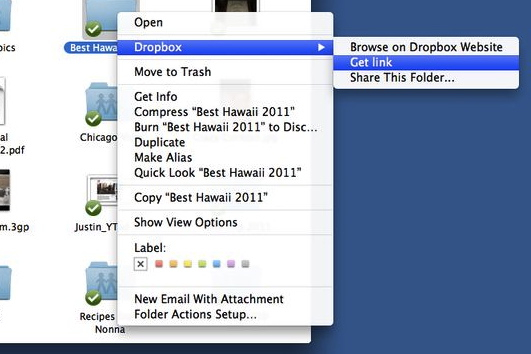