Share All sharing options for: Google joins the lobbying elite with record spending on lawmakers in 2012

Google's now playing to win in Washington. Despite arriving late to the anti-SOPA party, the company is now heavily invested in lobbying and lawmakers after spending $5.03 million in the first quarter of 2012. Google is now spending at a level that, if sustained throughout the year, will vault it from being a group that simply "educates" Congress to one that actively aims to buy influence in government alongside the largest corporations in the country. Google's spending on lawmakers is just a part of the company's growing cultural shift towards advocacy, which now includes a dedicated "Take Action" website that launched in January and began by drawing attention to the SOPA blackout day. Given the company's increasingly complicated relationship with lawmakers and regulators, its mounting competition, and threats to the web as we (and Google) know it, the company's lobbying budget suggests that Google sees the US government and public confidence as a growing area of concern for its interests.

So just how big is Google's lobby? With a lobbying budget of $5.03 million in Q1, Google surpassed Verizon at $4.51 million and Comcast at $4.55 million, and is now one of the biggest lobbies in Washington by total spending — at least for this quarter. By comparison, AT&T spent $6.84 million, Microsoft $1.72 million, Facebook $650,000, and Apple $500,000 in Q1 2012. Considering that Google has more than quadrupled its quarterly lobbying spend since 2009 with increases every quarter, it's plausible that the company could at least double last year's lobbying spend of $11.42 million in 2012, which would put it on par with AT&T, ConocoPhilips, BlueCross / BlueShield, and the American Hospital Association — companies with annual lobbying budgets that ranked in the top-ten in 2011. 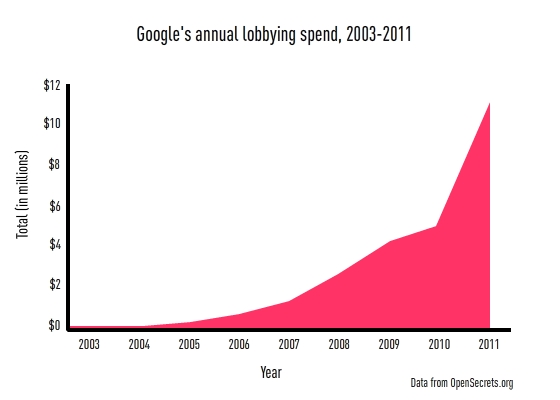 That's an impressive amount, but Google and the rest of the tech industry still have a lot of catching up to do if they want the same impact that Washington's current titans of industry can achieve. For the sake of perspective, AT&T's lobbying spend since 1998 tops $134 million, while Google has spent just $24.5 million on lawmakers in its lifetime. Additionally, Google lacks the enormous local lobbying power that companies like AT&T and Verizon have amassed over many years — power that Google has recently tried to emulate through its direct appeal to its visitors on the web. Art Brodsky, a director at Public Knowledge, tells us that Google has been "vastly outspent" for the entire time it's been in Washington, and that "AT&T and Verizon have the ability to tap into their local lobbying operations to bring pressure" in ways that Google has not generally been able to do.

Google's most recent lobbying report shows focus on a number of specific bills, including the Stop Online Piracy Act, or SOPA (HR 3261), the Cyber Intelligence Sharing and Protection Act, or CISPA, (HR 3523), and the Global Online Freedom Act of 2011 (HR 1389) — a bill that would prevent US companies from assisting foreign governments in using the internet to monitor and censor citizens. According to data from OpenSecrets, Google (which now includes Motorola Mobility) had the second largest lobby by number of reports for copyright, patent, and trademark issues in 2011 — surpassing the Recording Industry Association of America (RIAA) in that area. Google has also made some strategic lobbying hires in recent months, adding former-congress-member-turned-lobbyist Susan Molinari to head up its DC office back in February — an example of the company starting to use Washington's proverbial "revolving door" to get results in government.

Google's new lobbying machine doesn't necessarily indicate that the company has turned to the dark side: after all, it did eventually decide to lobby against SOPA and PIPA in harmony with public outrage over the bills. But the company is also running into new and unfamiliar walls as the shape of the web contorts towards social content, and by Google's own admission, it's had to make big changes to stay relevant to its users. And as the company's new lobbying budget indicates, it's not just changing product features or layouts as part of its quest to be loved: Google's changing its own culture.