Intel has just revealed its third-generation Core processors, codenamed Ivy Bridge, and the reviews are already starting to pile up. The reviews only cover two of the beefier chips offered by Intel today: the 3.5GHz Core i7-3770K for desktops and the 2.6GHz Core i7-3720QM for laptops.

Intel has just revealed its third-generation Core processors, codenamed Ivy Bridge, and the reviews are already starting to pile up. At first just the quad-core versions are going to be available — ultra low voltage and dual-core Ivy Bridge processors are slated to come out later this spring — so the reviews only cover two of the beefier chips offered by Intel today: the 3.5GHz Core i7-3770K for desktops and the 2.6GHz Core i7-3720QM for laptops. The new processors all represent a "tick" in Intel's upgrade cycle; it's a refinement and improvement of the previous Sandy Bridge processors that offers improved integrated graphics and power savings in a smaller package (it's built on the company's new 22nm architecture). Most of those changes are beneficial for laptops, but there are slight improvements to be seen for the desktop users among us, too.

Anandtech and PC Perspective spent some time with a reference 15.6-inch Asus N56VM laptop using Intel's new 2.6GHz Core i7-3720QM, and the good news for mobile users is that the integrated graphics have come a long way, just like the chipmaker promised. Anandtech ran the processor through a litany of modern games on medium detail settings at 1366 x 768 and, on average, integrated graphics performance on the HD 4000 was nearly 50 percent better than on Sandy Bridge's HD 3000 graphics, making "medium quality gaming now possible" on mobile (see chart below). Unfortunately, at least on the Asus system, battery life didn't see a massive improvement — either matching or hardly bumping up life compared to Sandy Bridge — but much of that is dependent on individual systems. We'll just have to wait to see the new processors in more laptops (especially when the ultra low voltage and dual-core ones find their way into ultrabooks later this year) to see if Ivy Bridge offers a substantial improvement in that department.

Anandtech, PC Perspective, Tom's Hardware, and The Tech Report all offer similar opinions on the desktop-class, $313 Core i7-3770K. The bottom line is that if you've got a Sandy Bridge processor in your rig, there isn't a compelling reason to upgrade to Ivy Bridge at this point, as the CPU performance is only slightly improved (10 to 15 percent, max, according to PC Perspective). However, if you're using anything older than Sandy Bridge, this is an excellent time to upgrade — especially since Intel is pricing the new processors at nearly the same price point as its previous-generation offerings. The processor runs cooler and uses less power (20 to 30W less), and the integrated HD 4000 graphics also delivered, allowing low resolution gameplay (1366 x 768) on medium settings in most games — up to a 45 percent improvement over Sandy Bridge on desktops according to PC Perspective. However, if you're in the market for an over $300 quad-core desktop processor, it's safe to assume you're not going to be relying on the integrated solution, as even a $100, mid-tier discrete graphics card offers far better performance. Still, the gains are exciting for future HTPCs and all-in-ones. 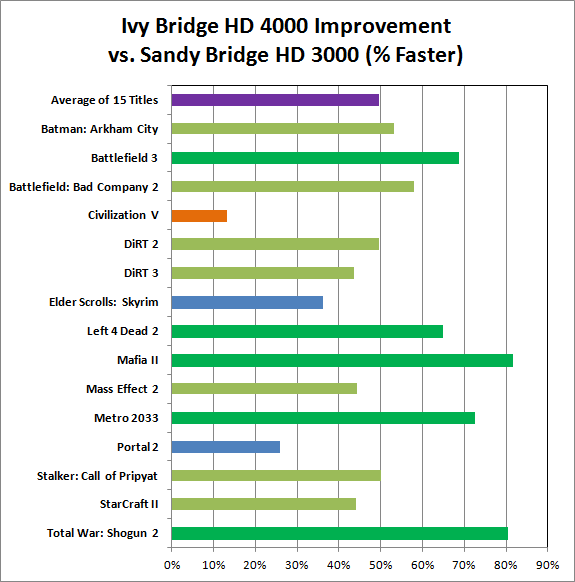 More from this stream Intel's Ivy Bridge CPU architecture: from rumors and roadmaps to release