Odds are, if I'm reading a book I'm doing it in bed. At night. In the dark. That's not so great for ebook readers, which (like a paper book) require a light in order to be seen. I've been asking ebook manufacturers why they wouldn't add lights to their devices for some time, and now Barnes & Noble has done it.

The Nook Simple Touch with GlowLight is a virtually unchanged version of last year's model, but the company added a glowing white light that makes the screen readable in darker environments. It's not as bright and painful to look at as a lit-up LCD, nor as kludgy as an ebook reader with a light attachment, and at $139 it's no more expensive than the ad-free Kindle Touch. Is the new Nook worth an upgrade over last year's model? Is it enough to make Kindle owners jump on the Barnes & Noble bandwagon? Read on.

The GlowLight Nook (that's what I'm going to call it from now on, to avoid having to use the monstrous full name over and over) is virtually unchanged from last year's model. There's almost nothing you can do with it except read, and you can start reading the second you pull the device out of the box. It automatically connects to Wi-Fi networks if you're in a Barnes & Noble or a Starbucks, and connecting it to your home network is cake thanks to the impressively usable on-screen keyboard.

The Nook's plastic body gives a bit as you hold it, making it feel less like a gadget and more like a paperback book in your hands. It's noticeably thicker than a Kindle Touch, at 0.47 inches (11.9mm) to the Kindle's 0.40 inches (10.1mm). It's a little lighter than the Kindle or the Nook Simple Touch, weighing just shy of 7 ounces — adding the light while making the device thinner is an impressive feat. At these numbers, though, the specs don't really matter; the bottom line is the GlowLight Nook is incredibly comfortable to hold and use, even in one hand, and even after hours of reading my arm didn't get tired. Given that in only takes about five minutes of holding an iPad before it feels like a workout, that's a nice change.

The only way to tell the new Nook from the old, at least with the light off, is the plastic strip around the edge of the device — it's now light gray instead of dark gray. Exciting, right? I like the new look, but I like the old look too.

In an effort to make the GlowLight Nook more worth the $139 outlay, Barnes & Noble is now including an AC adapter in the box, and is building a screen protector into the display — both were previously optional accessories with extra cost, and while it's a little ridiculous that you previously had to buy a charger, at least it's there now. Of course, the best thing you won't have to buy anymore? A light. 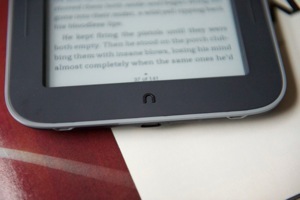 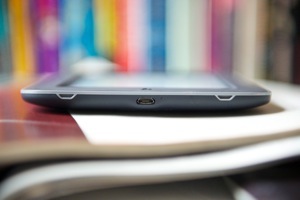 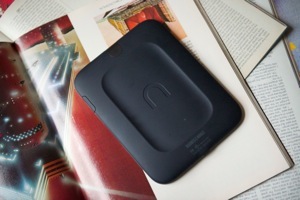 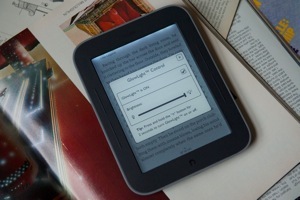 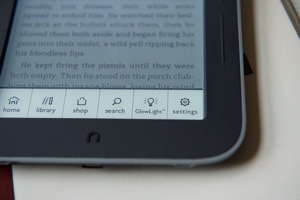 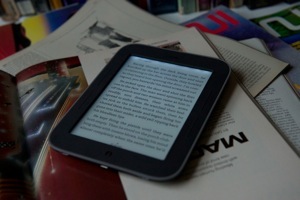 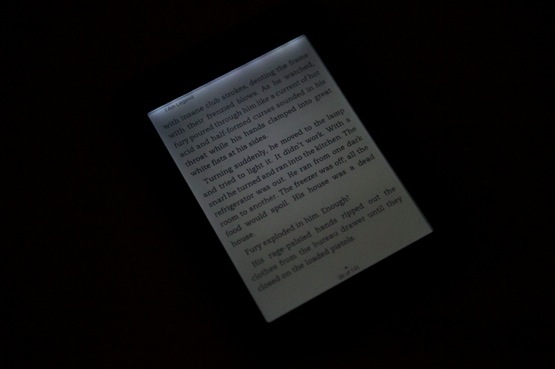 The big change here is the GlowLight — it makes the Nook's name a serious mouthful, but it's a wonderful addition to the device. There's a new item in the main menu for toggling and adjusting the light, or you can press and hold the "n" button for about three seconds to turn it on or off. Barnes & Noble doesn't want to explain how the light works, but it's basically a set of eight LED lights at the top of the device, slotted in between bezel and display. The lights shine down onto the Nook's display, and Barnes & Noble works its patent-pending magic to spread the light uniformly over the whole screen.

I wouldn't describe the light as uniform, though. It's really bright at the top, right next to the LEDs, then there's a dark stripe right below. It evens out considerably by the time it's illuminating any text, but it's still inconsistent enough to make certain lines of text look slighty darker or lighter than others. None of it really impedes the reading experience, but it's not as nice-looking as a cool, even glow would be.

Still, all things considered, the light works really well. Rather than a backlit screen that seems to glare out at you, the Nook's screen really does glow a bluish white, which is both easier on your eyes and just generally a nice effect. The light's intensity is customizable, and will go from just-barely-on to blind-you-immediately levels of brightness. Reading in bed, I was able to use the Nook with the light only slightly above the minimum level, and still read comfortably. Barnes & Noble touts that the light is much less disturbing to your partner in bed, and that it'll pretty much save your marriage forever; given that I could turn up the GlowLight and use the Nook as a flashlight, I don't know how much I buy that. Still, it's far less obtrusive than using a lamp or an iPad, and that's good for you and whoever's in bed next to you.

Despite the addition of the GlowLight, Barnes & Noble still promises impressive battery life from the Nook. You'll still get two months of use without the light on, just like the last version, but even if you read for 30 minutes a day with the light on the company says you should still get a month between charges. That number doesn't specify a particular brightness level, but since the lowest settings are totally sufficient, that number's probably not far off. I haven't used the Nook enough to kill the battery yet, but over four days of pretty heavy reading and testing, I barely made a dent — you shouldn't have a problem with your Nook dying too often. One word of caution, though: if you accidentally turn it on in your bag you could run your battery down by accident, so double check that the screen timeout is set to a lower number — two minutes or five minutes. Barnes & Noble VP Chuck Neugebauer told us the device will last over 50 hours with the light on, but that's still a far cry from the month-long battery you expected when you tossed it into your backpack. 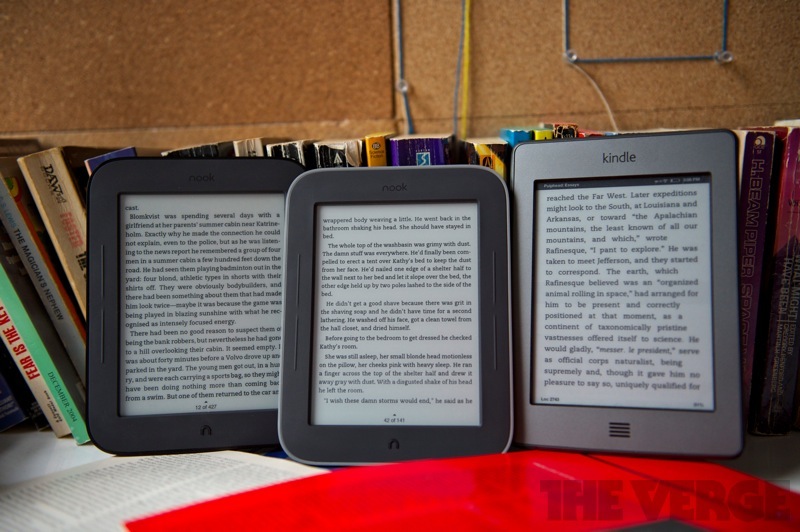 From a pure hardware standpoint, I'd take the Nook over a Kindle any day — I love the hardware page-turn buttons, the soft-touch feel, and the overall aesthetic of the device. The Nook is also a faster and more reliable touchscreen experience, though the Kindle Touch is much improved thanks to a couple of software updates. The GlowLight Nook only flashes the screen every six or so page turns, which leads to a bit of ghosting on the device but also makes for a much more pleasant experience.

As with the hardware, all of the features and options available on the GlowLight Nook are the same as on last year's model, so once again I'll point you to that review for more information. The short version: there are plenty of ways to customize the reading experience, and everything from shopping to reading is really intuitive and straightforward. The same problems apply, too: syncing isn't nearly as intuitive as I'd like it to be, forcing you to manually send your progress to Barnes & Noble's servers. Amazon's integration is so much cleaner and simpler, and requires exactly zero effort on your part.

The really frustrating omission, though, was something I didn't even consider until I started using the GlowLight Nook and not my Kindle. My Kindle has a dedicated email address, and services like Instapaper and Readability make it easy to send an article (or your whole queue) to your Kindle for reading. It's also easy to send PDFs, ebooks from other sources, and just about any other document you can think of. You can sideload content onto your Nook, too, but it's a much harder and kludgier process involving a lot of ePub files and card readers. My Kindle is basically my Instapaper reader, and the Nook's not nearly as good a device for that kind of use.

The best Nook yet, but it's not quite worth the switching costs

Ebook readers can be harder to deal with than cell phones or almost any other gadget, because you're so married to whatever you choose. Once you pick an ecosystem, you're effectively locked in, and the fact that I bought a Kindle three years ago and then dozens of books through Amazon means I can't feasibly switch to the Nook. If I were in the market for a first ebook reader, though, or upgrading from an older Nook, I'd take a long look at the Nook Simple Touch with GlowLight. It works really well, lasts basically forever, and as long as you just want to buy, lend, and read books, it's definitely on par with the Kindle and Amazon's ecosystem. The Kindle does better with outside content and syncing, but if you're buying an ebook reader to replace your huge paperback collection, the Nook does a great job. The Nook Simple Touch plus a good, useful light is a pretty great combination — but we've heard Amazon's working on something similar, if Bezos and company already have their hooks into your collection.

For now, I'm sticking with my Kindle (partly because I don't have much choice), but I'm going to have pangs of jealously every time I have to get out of bed to turn off the light at night.