Ohio State university is preparing to test its new 500-terawatt, $6 million laser, which it hopes will unlock the secrets of nuclear fusion.

Ohio State University will begin live testing its 500-trillion-watt laser on May 15th in an effort to explore the theory behind fusion and work out how it might be possible to create sustained fusion reactions as a future source of power. The laser has taken six years to build, and cost $6 million to construct with funding from the US Department of Energy. Each beam will last for only one billionth of a second, though releases the same amount of energy as the northeastern US power grid. 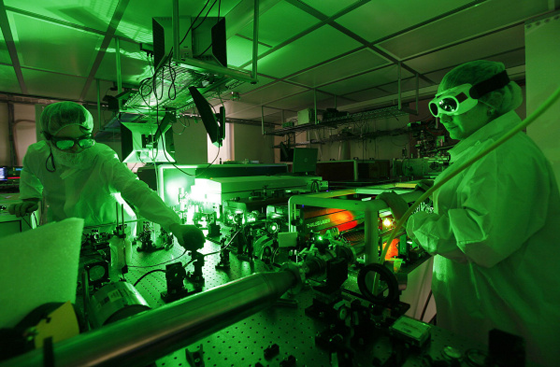 The laser is fired at a pellet of deuterum-tritium ice less than a centimeter in diameter, which has a density 300 times greater than water. As the beam hits it, the center of the pellet will heat up to 50 million degrees Kelvin, theoretically triggering a fusion reaction. The facility is expected to be able to shoot up to one hundred beams per day, as compared to the single shot that other lasers like the National Ignition Facility are capable of. While sustained fusion might only be a theory for now, Professor Richard Freeman is excited about the potential for the laser: "When this happens, and it’s going to be measured in months not years, it will be a major watershed event," he told the Columbus Dispatch. "This is a very exciting time."