AT&T just posted its Q1 2012 earnings, and the news was mixed — while the telecommunication giant's total consolidated revenue of $31.8 billion represented a two percent increase year-over-year, the company only added 726,000 new wireless subscribers.

AT&T just posted its Q1 2012 earnings, and the results were a bit mixed. The telecommunications giant's total consolidated revenue of $31.8 billion represented a two percent increase year-over-year, while the wireless side added 726,000 new wireless subscribers, of which 187,000 were postpaid wireless subscribers. While AT&T says that it made gains in every customer category, it still trailed Verizon's 501,000 net new postpaid wireless customers in Q1. Total wireless revenues were up 5.4 percent year-over-year to $16.1 billion; AT&T now has 103.9 million subscribers, up from 97.5 million in Q1 2011. Data revenues increased nearly 20 percent, reaching $6.1 billion — much like Verizon reported last week, data is clearly a key growth driver for the big carriers right now.

More good news for AT&T included the fact that the company sold 5.5 million smartphones; 59.3 percent of AT&T subscribers now use a smartphone, up from 46.2 percent a year ago. AT&T said that 88 percent of those subscribers are on business or family share plans, which helped it reduce churn to the lowest seen in seven quarters. AT&T also said that it "activated" 4.3 million iPhones in the quarter, and while we're not sure exactly how AT&T differentiates between activations and sales, the iPhone clearly continues to be a significant part of AT&T's smartphone portfolio. This compares to the 6.3 million smartphones sold at Verizon, 3.2 million of which were iPhones. All these smartphone users are definitely helping AT&T's bottom line — the company said that ARPU (average revenue per user) for smartphone users was 90 percent higher than non-smartphone users.

While AT&T didn't break down iPhone activations by model, it wouldn't surprise us to learn that the humble but free iPhone 3GS was helping AT&T there. AT&T is claiming that the 5.5 million smartphones exceeds the previous Q1 record, but last year the company reported the same 5.5 million smartphones sold — if this quarter represents a record, it must have just barely beat out Q1 2011 sales. AT&T's also managed to make major headways in converting customers to its dreaded tiered data plans — 61 percent of all smartphone subscribers are on tiered data, up from 38 percent a year ago. AT&T also added 240,000 tablets in Q1, and a total of 460,000 "branded computing" devices (which includes tablets and data-only devices like Mi-FI hotspots).

As for AT&T's wireline side, first-quarter revenues of $14.9 billion were down about one percent compared to a year ago. U-verse subscribers reached 6.2 million, with 200,000 new TV customers and 103,000 net new wireline broadband connections. Overall, AT&T has a total of 5.9 million U-verse broadband subscribers, with four million U-verse TV subscribers. U-verse residential customer sales accounted for $5.4 billion of AT&T's wireline revenue, up one percent over a year ago. AT&T's having a conference call to discuss these results in a few hours, and we'll be listening in for more details on how the company's first quarter went and the company has planned for the rest of 2012. 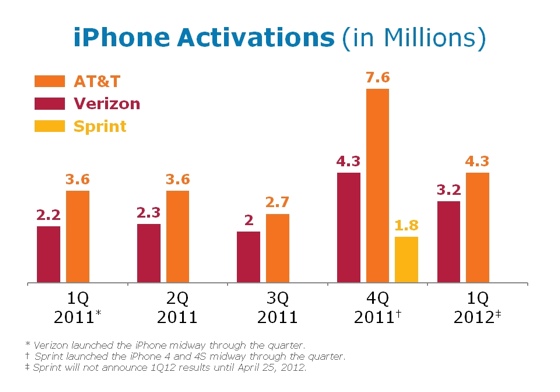