Valve is developing Steam for Linux, release 'not too far out' (updated with pictures)

Valve is developing Steam for Linux, release 'not too far out' (updated with pictures)

Michael Larabel of Phoronix claims that Valve is working on Steam for Linux, and that he's personally run the binaries.

Linux gamers, perk up your ears: the elusive port of Valve Software's digital game distribution platform Steam is finally in development, according to a Phoronix scoop. After spending years trying to track it down and finding evidence in 2010, Valve denied the existence of a Linux version in a GamesIndustry.biz interview, and that was allegedly that. Last month, though, Larabel tweeted that Valve co-founder Gabe Newell personally reached out to him about a Linux build... and yesterday, he flew out to Valve's headquarters in Bellevue, Washington for a personal meeting.

"Steam is coming to Linux," he replied to a question on Twitter afterward.

#valve does have Linux games coming plus other very positive Linux plans... I'll briefly post some screenshots and such tonight.

He hasn't published those pictures yet, but over at the NeoGAF gaming forums, there's even more: reportedly, Larabel took to the Phoronix IRC after a meeting and tour of Valve, and he claims that he ran Linux binaries of the Steam client himself while at the company's headquarters. If true, it sounds like Steam for Linux is far more than just a glint in Gabe Newell's eye. We'll update when Larabel provides photographic evidence and more details tomorrow morning.

Update: Larabel of Phoronix has made good on his promise and has made some Linux users very happy, we suspect. According to a report, Valve has a working version of the Source Engine running natively on Linux, and the first game that's being demoed on the system is Left 4 Dead 2. Larabel says he saw the game running on a computer with Ubuntu 11.10 installed. Valve is also working extensively on bringing the Steam game client and multiple other titles to Linux — including those from the developer itself and others from third parties. While it sounds like a general release is still a ways off (at which time it'll likely be made available in beta form first), Larabel walked away very impressed with Valve's — and especially co-founder Gabe Newell's — commitment to Linux, so at this point it would appear that it's a lock that Steam will come to its third OS. If you're looking for a bit more photographic evidence, check out the Phoronix article. 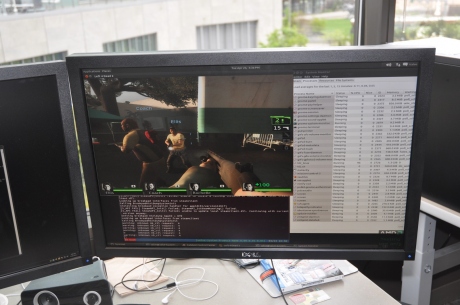