By the numbers: in portable gaming, Nintendo's loss is Apple's gain

Nintendo's financial report today was accompanied by some truly detailed data about the company's hardware and software sales over the past decade and a half. Faced with such a treasure trove of information, we felt compelled to use it to test the popularly reported trend of mobile gamers moving away from dedicated handhelds and toward smartphone entertainment. Do the hard numbers cohere with the general mood?

Share All sharing options for: By the numbers: in portable gaming, Nintendo's loss is Apple's gain

Nintendo's financial report today was accompanied by some truly detailed data about the company's hardware and software sales over the past decade and a half. Faced with such a treasure trove of information, we felt compelled to use it to test the popularly reported trend of mobile gamers moving away from dedicated handhelds and toward smartphone entertainment. Do the hard numbers cohere with the general mood?

The above chart lists the reported annual sales per fiscal year, so 2012's total of 18.6 million spans most of 2011 and the first few months of this year. Looking at the long-term picture in this fashion, things don't look quite so dire as we might have thought. Nintendo has had both its ups and downs (mostly ups) over the past 15 years and the latest annual sales are almost exactly in line with its long-run average. What's the big deal? 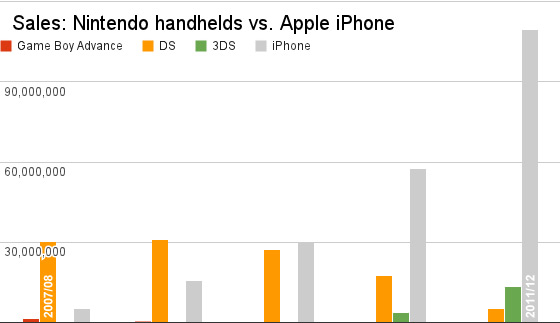 Let's take a look at the same data, but narrow it down to the period immediately after that 2008 zenith of 31.9 million units sold. What we see now is a consistent downward trend. Adding in the growth of the iPhone over that period, which began selling just as Nintendo's mobile gaming business was reaching its peak, shows a definite inverse correlation. Of course, correlation need not necessarily mean causation, so let's not pin any badges on the iPhone just yet, but it's undeniable that the rise of the smartphone and the demise of the portable console are happening at the same time and in similarly unswerving fashions. Since 2009, Nintendo has seen drops of 14, 22, and 12 percent in its annual global sales, while smartphone ownership has been growing exponentially.

Another aspect to consider here is that the market for mobile devices and gaming has only been growing over the past few years, as evidenced by the iPhone's ridiculous sales success. Here's some sobering context for anyone considering Nintendo's situation as a form of stagnation rather than market loss: Apple sold more iPhones in the last quarter, 35 million, than Nintendo has been able to sell handhelds in any single year. The total of 109 million iPhones sold over the past four quarters eclipses the 98.5 million Nintendo portables sold over the past four years. And that's without even considering the vast market commanded by Android devices. Or Apple's iPod touch and iPad, two hugely popular mobile gaming platforms in their own right.

So the market's huge but instead of growing with it, Nintendo's sales are actually falling. The fact the all-new 3DS could only curtail the yearly shrinkage in sales for Nintendo — while being sold at a loss — instead of returning the company to growth is evidence enough of the trouble it's in. 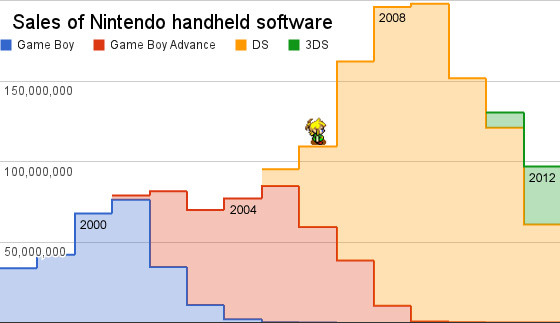 Hardware and software have a symbiotic relationship on any device, but in Nintendo's case that's especially true. Software sales for the company mirror hardware very closely — albeit at a much higher volume — and demonstrate the same peak in the period between 2007 and 2009 and a similar dropoff in the years since. The thing we've known all along is that Nintendo sells consoles as a way to distribute its games to users; the most popular games for any Nintendo product are made by the Japanese company itself, there's no arguing about that fact. But we can now see what happens when people stop buying the new hardware in droves: the new software follows the same trajectory.

There have been calls from analysts for Nintendo to abandon the strategy of keeping its games exclusive to its own hardware and start distributing them as widely as possible. That's completely antithetical to Nintendo's self-image as a gaming company that provides everything a person needs to have fun, but the economics of the idea are growing ever more compelling when you look at data like this. Sure, the company would lose the central reason for anyone to buy its portable consoles, but if handhelds are headed for the same fate as dedicated mp3 players, why delay the inevitable? 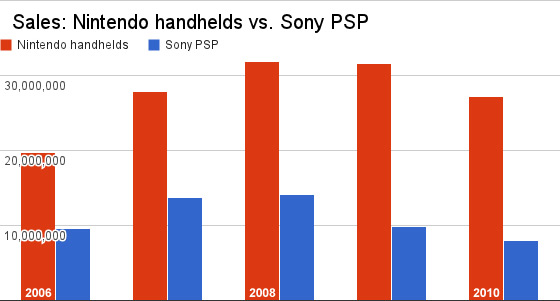 Nintendo has been the dominant entity in mobile gaming for a long time, and still retains the lion's share of the market for dedicated handheld devices. The trouble the company finds itself in today is that the same market is no longer synonymous with the idea of mobile gaming. People have moved on, and just like the VCR, the PMP, and the Blu-ray player, the portable console is losing out to more versatile devices that can do its job alongside a great many others. It's possible, much as with PC gaming, that the very best mobile gaming will only ever be available to those who buy a device built especially for that purpose — but Nintendo's and Sony's own sales show that the interest in such machines is growing increasingly niche.