This is Aura: hands-on with the latest version of Chrome OS

Google updated Chrome OS this week, and we got to test out the newest version, called Aura.

Share All sharing options for: This is Aura: hands-on with the latest version of Chrome OS

Our Samsung Series 5 Chromebook hasn't gotten much love recently, but Google just pushed out an update through its developer channel, called "Aura." We downloaded and tested the new update, and were surprised how suddenly... familiar it felt.

To put it simply, the changes in Aura are clearly designed to make the Chromebook feel like a laptop rather than a browser with a keyboard. There's actually a desktop, with a background and everything. There are icons at the bottom on the left side, and a Quick Launch-style menu on the right side — it looks just like the Windows 7 taskbar. The right-most icon in the list opens a page of bookmarks that looks a whole lot like the Launch Pad feature in OS X Lion, except that instead of apps it's shortcuts to websites. Aura feels like a mix between Mac OS and Windows 7, and it's clear that's where Google's trying to take its operating system.

Our favorite of the bookmarks is "Scratchpad," which pops up a tiny floating window that lets you take quick notes — kind of a dumbed-down Simplenote app. Scratchpad hooks into Google Docs, too, so you get a folder called "Scratchpad" with all your notes inside. It's the closest thing to a non-Chrome app we've seen yet on Chrome OS, and it's a pretty clever tool.

Everything still happens in Chrome, obviously, but fortunately you can now have multiple windows open at once — that makes multitasking a whole lot easier. As you drag windows around, they'll snap to the display's edges, so you can quickly move a window over and have it automatically fill half the screen. It works just like Aero Snaps in Windows 7, and by itself makes the Chromebook a lot more usable than just having one immovable window with infinite tabs. The whole OS felt faster than ever, too, enough to make us jealous that Chrome's not always so responsive.

The basic concept of a Chromebook hasn't changed with the new update, and we're still more intrigued with what Google Drive could mean for Chrome OS anyway. Google's clearly trying to make the Chromebook feel a little more like a laptop, with a user interface and design that should be a lot more familiar to people who use Windows or Mac OS, and like to open apps other than a full-screen browser from time to time. Google's clearly still committed to the OS, and we'll be watching to see where it goes next. 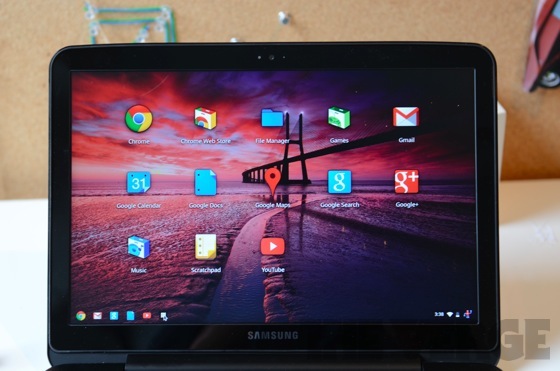