The first picture of the Sony NEX-F3 has leaked, and Sony Alpha Rumors says it's due to be announced next month as a replacement for the NEX-C3.

The next entry in Sony's popular mirrorless camera series is set to be the NEX-F3. Sony Alpha Rumors has the first picture of the camera, and says it's due to be announced next month as a replacement for the NEX-C3. From the picture we can see that it has a 16-megapixel sensor (likely the excellent Sony unit used in the NEX-5N, Nikon D7000, and others), a white body, AVCHD video, and what looks like a pop-up flash. That last feature has only been found on the premium NEX-7 until now, with all other NEX models shipping with a small clip-on flash. Like all other NEX cameras the F3 has a tilting screen, but it looks like this one can tilt 180 degrees for framing self-portraits — could this become the mirrorless camera of choice for Facebook profile pictures? We'll have to wait until May to know for sure, but it looks like a safe bet.

Update: More photos have surfaced at Yang Canggih, confirming the details above and also showing that the camera should be available in black and pink in addition to the white we've seen already. 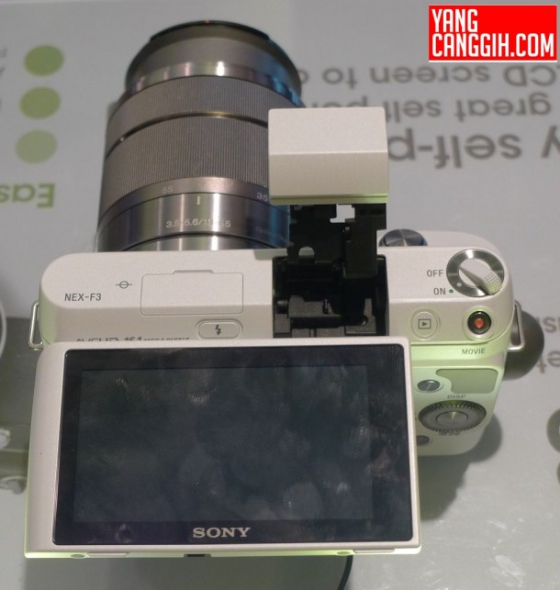