User interface design is changing. Touch screens are everywhere, apps are hugely popular, and there are very few limits (if any).

Cars are a perfect example of simplification. They’ve been getting easier to drive by creating more and more layers of abstraction between the user and engine. You know why that steering wheel is so large on the 1957 Ford Thunderbird? Because it doesn’t have power steering. You may know how to drive it, but that doesn’t mean you’ll do it well.

Going back further, you probably wouldn’t intuitively be able to drive a 1900’s Model T, arguably the first modern car. How many cars have a choke?

"Literacy is not declining."

Literacy is not universal. An app with no text can be easily translated to other languages. Text always needs to change, icons rarely do.

A lot of UI designs are moving towards touch-screen-centric controls (whether they’re on one or not). Icons are easy to put on touch screens because they’re square and work well at 44px. Text is harder. It’s only about 20px high and way too long.

These icons don’t represent the same thing. The leftmost icon (Google News) is literally news; it’s basically a newspaper. The center icon (Facebook News Feed) is what your friends are doing on Facebook. The rightmost icon (Instagram) is your friend’s comments and likes. Instagram represents comments as a speech bubble and likes as a heart. If you’ve commented on or liked a photo, you’ll easily recognize this icon. I do agree that it’s confusing that the view is named "news", though; since the home screen of Instagram is more analogous to news.

Every icon has to balance branding (size, shape, color) with ubiquitous recognizability.

"Many iOS apps use a settings gear in the upper left hand corner to denote the settings."

Which is anti-standardization. iOS has a clear settings app, which allows developers to include their own app settings. True, the settings are limited to basically switches and text fields, but that’s where settings are expected.

"Android was promising with their dedicated menu button though I am wary of where that is heading in future releases."

If discoverability is a big deal (ie the Office button), I’m surprised you like the Android menu. It’s one of the biggest hindrances to pre-ICS usability. "Back", "Home", & "Menu", which of these three is not like the other? Home is OS-level, back is OS-and-app-level, and menu is only view-level. Home will always take you back to the main screen, back will take to back to the last view (be it the same app or not), and menu will pop-up a list of hidden items. When I want to mark an email as spam, I don’t think to look next to the home button.

I use Android everyday and can’t wait until the menu button is fully depreciated. Some ICS apps still use a menu button, but it works more as an "overflow" button. It’s on the screen and aligned with other buttons of the same type.

iOS is a great example of how UIs are always evolving; using standard components to simplify designs. New paradigms (not created by Apple) are always showing up. Designers remix and alter iOS’s elements into unique controls that may not follow the guidelines to a tee, but still offer an easy and pleasure experience.

Centered action buttons in a tab bar were one of the first I noticed. Tab bars typically represent multiple views that the user can switch between, not (as in this case) the creation of something new.

"Pull to Refresh" is probably one of the most well known. Introduced in Tweetie, it allowed the user to perform an action as they were (possibly unknowingly) trying to perform it. 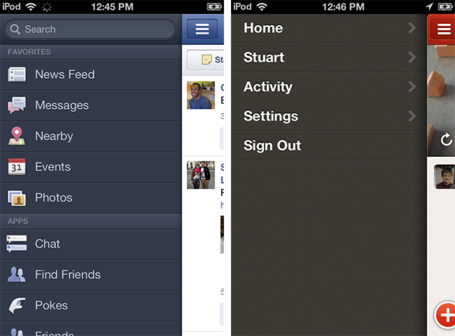 Facebook’s left-hand menu is something I expect to see more of. It gives the user the ease of a tab bar control, with room for a lot more tabs. Plus, by using the entire screen as a list, the use of text is almost required.

Designers drilling an app down to its component parts is not the problem; it’s ignoring convention. Don't get me started on Android apps looking like iOS apps.