A training manual for the Sprint Galaxy Nexus suggests that it will ship with LTE turned off.

All the pieces appear to be lining up for a rapid release of the Galaxy Nexus on Sprint. Two days ago, we obtained a Sam's Club document suggesting the smartphone would arrive on Sunday, April 22nd, and today, Engadget has an Galaxy Nexus training manual for Sprint employees that they allegedly have to finish absorbing within the next two weeks. Moreover, one page in particular from that manual hints at a launch sooner than later, and you can see it below: the Galaxy Nexus LTE will apparently arrive with its LTE connectivity turned off by default.

Perhaps that's standard practice at cellular carriers when a network is still in its infancy, but it seems to suggest that Sprint could sell the phone before its LTE network launches at all, and given that launch is still slated for a vague "mid-2012" the April 22nd release date sounds quite plausible. Of course, Sprint is touting the LG Viper 4G as an LTE-capable phone and preorders begin on April 12th, so perhaps Sprint's LTE network is closer than we know. 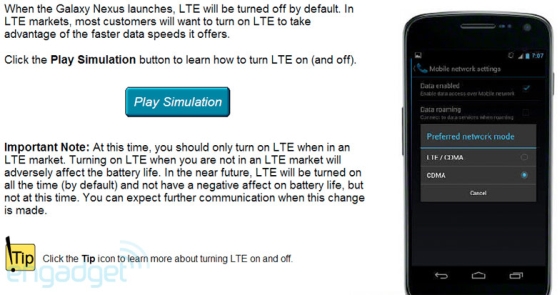