The story of Windows Phone 7 is a fascinating one, both for the devices themselves and for Microsoft. I would like to preface this post by saying that everything I am writing here is circumstantial and comes from me reading tea leaves.

A brief history of a new paradigm

Imagine the look on Ballmer's face when he first saw "Live Tiles". It had to be meme-generating good. A little team inside Microsoft found the cure for the common "Icon". They then blended in "Hubs, Pivots, and Panoramas" with their the evolving design characteristics of Metro to create something entirely new. The team behind Zune had finally made a break from the decades old folder, file, and application paradigm that had been regurgitated by companies since it was unveiled at Xerox PARC. Even better, this was authentically Microsoft.

I imagine this was an easy decision for Ballmer; "reset Windows Mobile now!" and like a hand grenade in a shoe box, developers flew out of that room without knowing what hit them. Code was compiled, grids were drawn, and, of course, patents were filed. They were not going to let this get away from them.

In record time, they were standing in front of Mobile World Congress previewing their new vision of the phone. Then BOOM, silence. This is where, I believe, things took a turn...

Evidence of a shift

Remember the expectations that were laid out for multiple device types based on the 3 Chassis versions.

Chassis - 3: never revealed but was rumored to go in a few directions.

These "Chassis" were the cure for hardware limitations we see today. 2 years in (assuming the February 2010 reveal) and you think we may have seen an evolved version of these chassis, perhaps Chassis - 4 with HD screens and multi-core processors. But we don't.

I'm going to fast-forward from here to Mango. Mango was revealed nearly 9 months early and given to tech press and developers before it's release. Everyone talked about the stability and how this build seemed nearly complete. This was February and the update was released in October. 8 months for bug fixes? The integrated apps saw no revolutionary features despite a world class team of designers working on the platform. A few new devices shipped and the enthusiasm seemed to dwindle. Does any one else get the feeling that they are treading water? 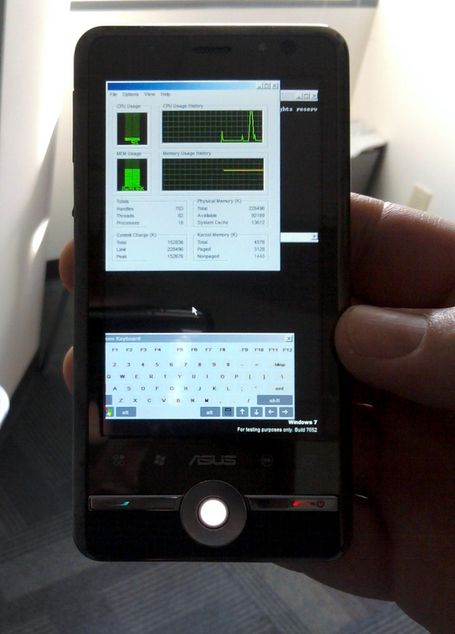 Then this image surfaced on the Microsoft Developer Blog. Huh... Windows 7 running on a phone... with really low resource allocation.

Why? What happened to the revolution? The fact is, is that it happened, but not just for them, for all of Microsoft.

The dream they had early on about a redesigned phone was bigger than they expected. They founded a religion. It wasn't about the phone anymore, it was about convergence, ecosystems, and had far reaching implications. They needed an entertainment strategy to make sense across all of their systems. They needed a developer story that would be the most affective across all platforms. MS needed Windows 8 and Windows Phone to be in sync.

The side effect of this was stagnation of the current product. Commands were given to stay afloat and the treading water began.

The next big thing

I believe Apollo is another reset and it's development cycle was pushed up to earlier than we think. Shortly after the major development on Windows Phone 7 was completed, the Team was shown the Windows NT core up and running on ARM more efficiently then they expected. Once again, it was time to stop what they were doing and focus on this inevitable future. Plans for evolving Windows Phone as we know it to different chassis, were scrapped. A 7.5 update was scoped to keep the platform relevant but all designers and developers were moved to rebuild everything for this new OS. The convergence of Windows and Windows Phone was going to happen sooner rather than later.

By incorporating the NT core, Apollo will solve all Windows Phone's problems by giving it the power of Windows 8's mature kernel for flexible hardware, multitasking, security, and development platform (WinRT) while combining the brilliant work put into Windows Phone 7.

Get excited folks... Apollo is going to be huge.

The phone is dead

What will be interesting about Apollo will not be the phone OS, it will be the realization of a new Microsoft ecosystem.

TL;DR:Microsoft released Windows Phone 7 with high expectations but quickly realized they needed something bigger and deliberately stagnated the platform to focus on the real deal...

Nokia's new involvement may have changed things a little. Nokia has an urgency that Microsoft doesn't feel quite yet. They need to sell phones now and they need to sell a broad range of handsets tomorrow. I think they helped to layout plans for how to move forward while standing still. They worked on spreading Metro to new locations and pushed for low-cost hardware support. They may have developed these features on their own and gave birth to the updates for new locations and 256MB device support. While we all wait for the next best thing, Nokia is making sure that there will be a familiar base to build on for the future of the company.

Thanks to Nokia, I believe that Windows Phone 7 (WinCE kernel) won't die at Windows Phone 8 (WinNT kernel), there will be new updates to this platform. They will probably give it a new name but the product, at it's core, will continue to live on. The advantage to the current Mango platform is that it is wicked effecient on low-end hardware. With Tango, that will only be improved further. I think that Nokia wants to get people from all price points on to this hardware and that is why Windows Phone 7 will live on as a Symbian replacement. This will get all users used to the tiles and familiar metro environment. Imagine buying a Windows Phone for $99 off contract. This is where Nokia is driving the product. Maybe this was the plan all along, maybe it wasn't. Either way, the industry was moving too fast and Nokia needed to act.