We got a chance to demo Sprint's new HD voice technology, and it sounded good.

Share All sharing options for: Hearing the future: a first test of HD voice on Sprint's HTC Evo 4G LTE

When HTC and Sprint announced the new Evo 4G LTE, one of the hallmark features of the new phone was "HD voice," an upgrade to the calling experience designed to make your calls sound far better than they ever have. It's technology that Europe and Australian users have had for some time, but it's coming to the states with the Evo 4G LTE, and ultimately rolling out across Sprint's lineup. The demo during the presentation featured Kiefer Sutherland, and his raspy voice did sound dramatically better as he "switched" to HD voice. But that's just a demo, recorded a while ago — Kiefer could have sounded like anything.

We got to see and hear for ourselves after the presentation was over, in a sound booth set up specifically for the test. As we stepped in, we were handed two phones: the previous-generation Evo, and the Evo 4G LTE. Sprint reps didn't appreciate our wondering if the Evo was "the crappy one," designed purely to make the Evo 4G LTE sound better, but it worked. We spoke with a rep in another sound booth, both of us initially on last-gen Evos, and it sounded... well, it sounded like a cellphone. Then he told us to switch to the Evo 4G LTE.

The connection was instantly clearer, his voice sounding much crisper and fuller. Part of the HD voice technology has to do with expanding the dynamic range of the audio, allowing for more highs and lows to be recorded, and it made a considerable difference in the sound — it sounded uncompressed and natural, not tinny or shallow like a cell phone typically does. Our Skype calls always sound better than our phone calls, and this at least leveled the playing field. Noise cancellation was impressive, too: relatively loud music was almost entirely blocked out in the Evo 4G LTE, while we could hear every word of the song clearly on the old Evo.

We're not sure you could hear a pin drop yet, but HD voice certainly appears to deserve its high-definition moniker. We'll be waiting to see what happens as the technology hits more phones and users, especially Sprint's non-flagship devices, but we're liking what we hear so far. 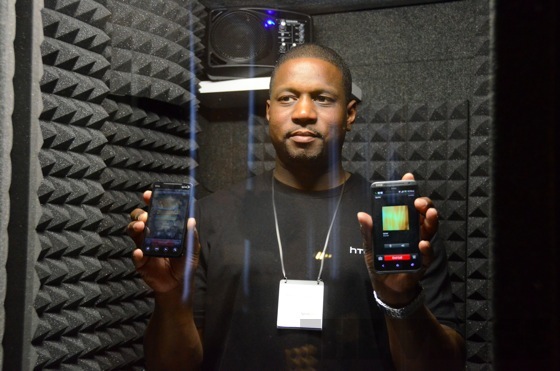