A recent set of emails posted on the xda-developers forums indicate that Asus may be readying a free GPS dongle for owners of the Transformer Prime to address the device's GPS issues.

Via Land of Droid | Source xda-developers (forums) and RRA

Owners of the original Asus Transformer Prime have been complaining about problems with the device's GPS since it first landed in customer's hands, and a subsequent teardown revealed a hardware design issue as the possible culprit. According to a post in the xda-developers forums, Asus is readying a solution to the problem: a GPS dongle. The post details an email exchange with an alleged Asus product manager, who claims that the add-on will be provided for free to existing TF201 owners, and is designed to look similar to the device's hinge. Another poster then chimes in, who claims to have been testing the device. The dongle is described as "minimalist" in design, and is said to use the Prime's proprietary connector, fitting flush against the bottom of the tablet when held in landscape orientation. The email chain also notes that more recent batches of the Prime — featuring serial numbers starting with "C3" — have improved Wi-Fi performance over previous models.

Adding fuel to the fire, a listing for a TF201 GPS Extension Kit recently appeared in the database for the National Radio Research Agency, a Korean entity that provides approval for communications equipment not unlike the FCC. Asus declined to comment when we reached out, but with the original emails citing mid-April as the targeted release date, we shouldn't have to wait too long to know if Transformer Prime owners will finally have a permanent solution on their hands. 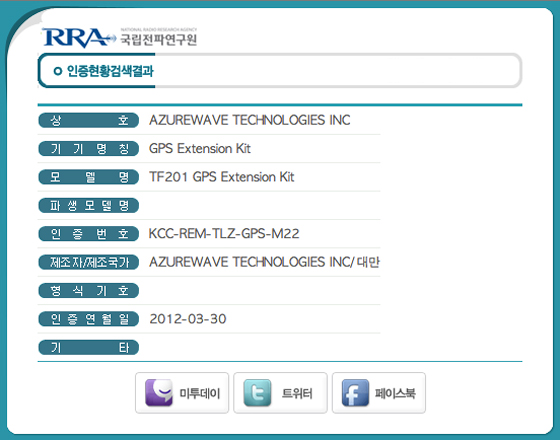