A slide of questionable authenticity that depicts an upcoming phone called the Nokia Lumia PureView has surfaced on Chinese site it168.

Chinese site it168 has posted what it claims are slides depicting a Windows Phone 8 Nokia Lumia PureView handset, featuring the same 41-megapixel sensor as the upcoming Symbian 808 PureView. The site describes them as picturing a concept, rather than a finished product, though we'd go so far as to say they're most likely the product of a fan's hyperactive imagination. The geometry of the 4.3-inch device on show doesn't make much sense, and the claimed spec of Adreno 320 graphics would require a Qualcomm Snapdragon S4 Pro processor, which seems a bit far-fetched at this point. That being said, you never know with Nokia, and if these pictures are genuine, there's at least one interesting thing to note.

The Windows Phone key is new, and taken directly from Windows 8, which would make sense given Microsoft's continued efforts to unify its branding over multiple platforms. While it's unlikely that this exact design would make it to mass market, it does follow the same basic design language as the Lumia series. Nokia isn't exactly afraid to make bold design decisions, some that result in beauty, and others that don't quite have the same effect. Releasing a phone with a curved display and wildly protruding camera would indeed qualify as a bold decision.

We reached out to Nokia for comment, who at first told us that "It’s Nokia policy not to comment on market rumor or speculation." We've also been told that it's likely a fan-based mockup and doesn't appear on the company's roadmap. 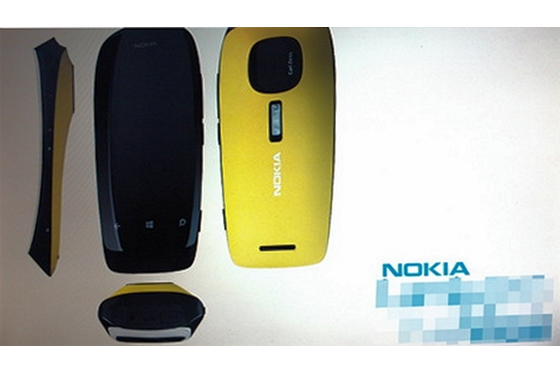 More from this stream Windows Phone 8: all the rumors ahead of the official launch