Lumia 900 launch: curbside promotions, some sellouts, and a lot of cyan

Lumia 900 launch: curbside promotions, some sellouts, and a lot of cyan

We took to the streets of Chicago today to get a sense of how Nokia's Lumia 900 is performing in the hearts and minds of consumers on its first full day of sales. Technically, this is day two of availability — it launched yesterday — but the downtown stores we spoke with said they weren't actually open on Easter Sunday, so for all practical purposes, this was the real day one.

Microsoft, Nokia, and AT&T are all treating the Lumia 900 as a major launch. All three have varying amounts of skin in the game, but arguably, it's the biggest deal for Nokia — the company has just a sliver of the retail presence and mindshare it once enjoyed in the US, and the 900 (along with the launch of the less flashy 710 on T-Mobile earlier this year) represents its big push. This is a game Nokia can't really afford to lose if it wants to successfully parlay its once-giant Symbian kingdom into another based on Windows Phone.

But it's Microsoft taking the lead early on: today the company ran its Free-Time Machine promotion in New York, Chicago, and San Francisco, inviting passers-by to step up to the giant Lumia and try to win some prizes. Nearby, kiosks were set up to let people play with the real phones — on tethers, naturally — and always-smiling young men and women dressed in bright blue suits and skirts were on hand to answer questions. 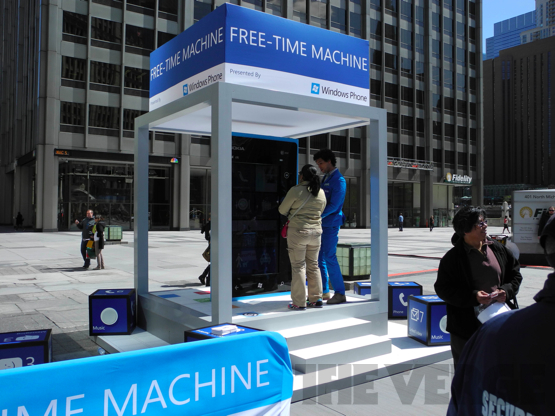 In Chicago, Microsoft had two Free-Time Machine locations: one in Pioneer Court (by the giant Marilyn Monroe, for those familiar with strange Chicago landmarks) and another in front of the iconic John Hancock Center. We visited both. The Pioneer Court location was well-trafficked — the bright blue workers (an obvious tribute to the Lumia 900's eye-searing cyan option) were doing a good job of catching peoples' attentions and roping them in to try for a prize. When we were there around 2PM, we counted some 21 people in line, and all of the hands-on kiosks had small lines of curious individuals waiting to try out the phone. The John Hancock location, toward the north end of Chicago's Magnificent Mile, was far less busy — in fact, there was literally no one in line to play when we arrived in mid afternoon. 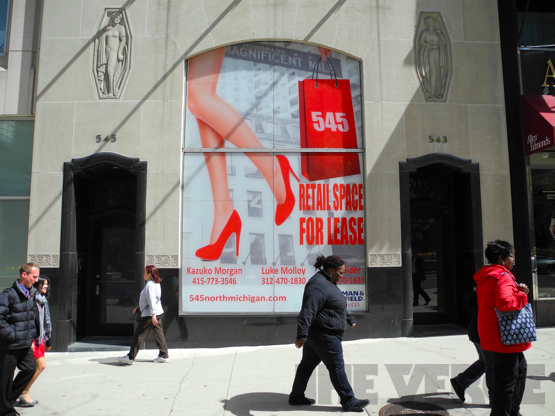 The Microsoft-led promo is only part of the story, though. The rubber meets the road inside the AT&T stores, where people are actually making the decisions that will tie them to a contract for the next two years of their lives. We visited three downtown Chicago locations — all in busy parts of the city — and discovered that it was business as usual. No morning rushes were reported; in one of the stores, a single gentleman flicked with curiosity through a cyan Lumia 900 tethered to the wall. At another location, cyan wasn't even out for customers to try, oddly — only the black model was available, which pops far less amidst an entire wall of black Android devices. We also noticed that they were tethered the same way as any other phone, with a big theft-resistant mass of plastic glued to the back. That makes it hard to hold and feel it the way you would in real-world use. Speaking as someone who's used the Lumia 900 at length, I can say that it needs to be held to be fully appreciated.

"They're doing well! We've sold three," we were told

But the store staff sounded encouraged. "They're doing well! We've sold three," we were told at the busiest location we visited around 2:30PM. The statement seemed contradictory — it wasn't clear how three phones could constitute a strong start, but clearly the sales reps have a better feel for the pulse of a new device's buzz level at the cash register than we do. And indeed, they ended up being right: a call to the same store shortly before closing time told us that the phone was sold out in both black and cyan. That store was unable to tell us how many phones they'd received in total, but a nearby store had received 15 to sell and had one black unit remaining; another had sold "maybe four" and had two blacks left. Early evidence suggests that cyan is selling at a better clip. In a way, it's no surprise — it's a refreshing change from the endless run of black and white phones we've seen over the past several years — but in another sense, it's surprising to see normal, everyday consumers step outside their comfort zone to buy a device that looks (and feels) this far off the beaten path.

Sellouts and near-sellouts on day one? iPhone-scale bedlam? Not quite — needless to say, 15 devices in a relatively high-volume urban corporate-owned AT&T store isn't very many, but it might be an encouraging sign for a manufacturer and a platform that are in need of a legitimate success. Either way, it's a slow burn: efforts like Free-Time Machine are clearly built around getting the word out, and it could be several months before we know with certainty whether the 900 has really made a dent.