CTIA Wireless 2012: an inside look at the US mobile industry's biggest week

CTIA has tweaked several aspects of its Wireless show this year, so here's what readers can expect from the revised event.

Share All sharing options for: CTIA Wireless 2012: an inside look at the US mobile industry's biggest week

It doesn't have the glitz, glamor, and... well, the general "Vegas-ness" of CES, but CTIA's annual Wireless show is a pretty big deal for the US cellular industry — and it's nearly upon us. It kicks off next Tuesday, May 8th, though we'll start seeing a handful of media events on the 7th. This year, CTIA has tweaked the timing of the event, the location, and the focus, so what exactly can you expect to see?

To answer that, we need to take a step back. For consumers who want to see hot new phones, CTIA's two annual shows have historically been oddly-timed "tweeners": the spring event has usually come right on the heels of Barcelona's giant Mobile World Congress, which itself comes shortly after CES. In other words, consumers, companies, and the journalists who cover them are all burned out — there simply aren't enough announcements to go around. And frequently, the devices announced at CES and MWC haven't even been released by the time CTIA's show begins. The fall event, meanwhile, comes just as companies are ramping up for their blockbuster CES announcements the following January.

That's not to say CTIA hasn't scored its fair share of important device announcements over the years. The groundbreaking Galaxy S — the device that launched Samsung into Android dominance — staged its world debut at CTIA WIreless 2010, for instance. Still, moving the show from mid-March to early May (and to New Orleans, where it hasn't been in over half a decade) could give event organizers some breathing room to scoop big news that carriers and OEMs might otherwise not be ready to share.

Show director Rob Mesirow doesn't necessarily agree, however. "I don't know about that. You know, our retail area continues to be huge. We have, for over a decade, been attracting the retailers in large numbers — big box down to mom and pop. We get the carrier as a retailer as well. But we've long been the number one wireless retail event in this country. It's like a secret, I guess. The mobile buyers come to our show, they don't go to CES."

"The mobile buyers come to our show, they don't go to CES."

Then why the timing change? "We did a very comprehensive study with McKinsey & Company two years ago where we looked at market trends. We talked to all of our key stakeholders and a lot of the attendees and decided that shifting out of the end of the first quarter and into the mid second quarter would really lend itself better to the new shift — the new cadence in the marketplace with regard to wireless products and services with more of an eye toward enterprise and retail."

Yes, "enterprise and retail." That doesn't sound exciting, and indeed, CTIA may still be ceding hardware announcements both to earlier shows and to independent events (like this Thursday's big Samsung event in London). Mesirow also notes that a "couple notable" exhibitors like Nokia have dropped their floor presence altogether — which echoes of Microsoft's decision to effectively pull out of CES — but that's not to say there aren't interesting trends emerging that fall outside the realm of meat-and-potatoes phone announcements: Dell and Barnes & Noble have both signed on as exhibitors for the first time, as have First Data, MasterCard, Visa, and Western Union — all flagbearers for the big mobile payments push that we've seen in the past year. Sony has a booth, too, fresh from its absorption of Sony Ericsson, which had previously developed a reputation for not taking CTIA very seriously.

Interestingly, the number of exhibitors is way up this year, even though the total amount of available floor space has remained flat — in other words, booths are getting smaller. We won't see any behemoth CES-style booths from the phone manufacturers like we did "back in the glory days," Mesirow says. And there are new hardware players, too: "We're seeing this really interesting trend that's taking place in the end-user hardware space. In terms of tablets and handsets... it's really just becoming a screen. So because of that, we're seeing lots of different 'screen manufacturers,' if you will, come into this space. All kinds of Shenzhen companies that are really coming into the US market in a really meaningful way now."

In other words, hardware firms that typically saved their presence for the labyrinthian halls of Mobile World Congress — Konka, for example — will be hawking their wares at CTIA this year.

So, with all that in mind, what are we expecting from the new-and-improved, later-in-the-year CTIA Wireless show next week?

Verizon is in the thick of a battle to secure AWS spectrum from a consortium of cable companies, and the acquisition has raised eyebrows inside the FCC, Congress, and among members of the Rural Cellular Association who believe that the spectrum could be better utilized by smaller players like T-Mobile. And that's far from the only fight being actively waged this year — despite last year's AT&T / T-Mobile proceedings, 2012 might turn out to be the biggest year for wireless policy in recent memory. CTIA has come out in favor of the highly controversial CISPA bill that President Obama has promised to veto, and AT&T's shareholders just rejected a measure which would've required the company to commit to net neutrality across their entire infrastructure. We're expecting a lot of conversations next week — both from government officials and company executives — about all the activity in Washington lately.

As we said before, financial companies are invading CTIA Wireless this year in a big way: MasterCard, Visa, Western Union, and First Data (among many others) are all exhibiting. Last year's Google Wallet announcement no doubt spurred the industry into action, but it's far from the only game in town: ISIS — supported by AT&T, T-Mobile, and Verizon — just made a splash recently at SXSW, and we'd imagine they'll be looking to do it again at CTIA.

Sprint selling the world on its network strategy

Sprint and T-Mobile still need to prove that they have the resources (and the raw spectrum) to pull off their ambitious LTE plans. Of the two, only Sprint has started launching its LTE network, and its first LTE devices are now on the market — including the vaunted Galaxy Nexus. That's a good start, but it's still got everything to prove until it rolls out a nationwide footprint, which is likely why the company will be hosting an event on the morning of the 9th to go over the state of its so-called Network Vision strategy.

Obviously, there'll be phone announcements at the show, too. We wouldn't be surprised if Samsung brought along the Galaxy S3 that it's likely announcing in London this Thursday — and if we're really lucky, we could even see one or more American carrier variants of it. In particular, AT&T has a somewhat secretive event planned for early in the show, which gives us hope that we're going to see some interesting new hardware. (What happened to the Skyrocket HD announced back at CES? Perhaps we'll finally see it here.) And with Verizon's well-leaked Droid Incredible 4G LTE making the rounds, we'd be shocked if it weren't on hand. 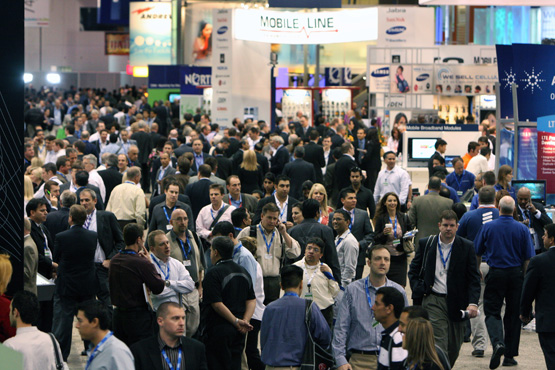