RIM CEO Thorsten Heins just officially launched the "BlackBerry 10 Platform," or everything that makes up the development stack for BB10, including many architectural elements of the PlayBook OS. What's new is something that RIM has only hinted at before: Cascades and the Cascades UI.

RIM CEO Thorsten Heins just officially launched the "BlackBerry 10 Platform," or everything that makes up the development stack for BB10, including many architectural elements of the PlayBook OS. What's new is something that RIM has only hinted at before: Cascades and the Cascades UI.

"Cascades" is RIM's shorthand for a set of developer tools and resources for building apps that fit the look, feel, and interaction models of BB10. Developers can build apps using Cascades tools in either C/C++ or Qt and will now be able to do something that developers for every other smartphone platform have always been able to take for granted: create standard UI elements like buttons and lists without having to hand-code them individually. In addition to Cascades, BB10 will still support the vast array of other options available for developing for either the PlayBook OS or BB10, including HTML5 and the direct, native coding common to games.

This is also the first time we've seen any BB10 apps using Cascades, and while RIM's featured app demos weren't anything beyond what we've seen on iOS and Android, the apps themselves looked far more modern and smooth then anything we've seen on BlackBerry previously. 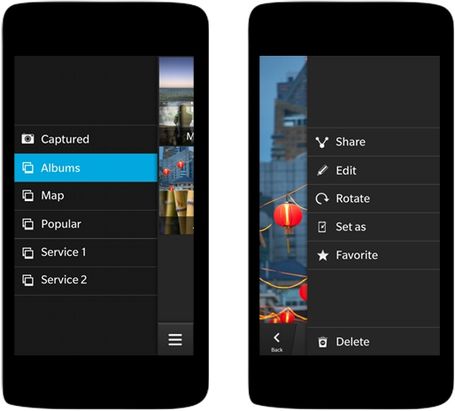 RIM had previously shown hints of the Cascades framework in January at the BlackBerry Developers Conference, but those hints amounted to clever demos of The Astonishing Tribe's graphical prowess — Cascades was the original name of TAT's UI development suite before the company was acquired by RIM in December 2010. Today's unveil will hopefully mean that Cascades has grown into a fully-realized UI paradigm with coherent and consistent user interface standards for BlackBerry 10. Developers at the BlackBerry Jam conference here in Orlando will receive BlackBerry 10 Dev Alpha Developer Devices to use for creating BB10 apps, and RIM will be releasing more details on the BB10 SDK and Cascades UI guidelines later today.

The Inside BlackBerry developer blog has updated to include more information of Cascades and information about how to download the beta versions of both BB10's native SDK and WebWorks SDK.