Both Sierra Nevada's Dream Chaser and Blue Origin's Space Vehicle have gone into the wind tunnel, giving us a chance to see their designs in more detail.

There might not be air in space, but the commercial shuttles aiming to escape the clutches of Earth's gravity still have to make their way through more than a few miles of atmosphere to get there. Because of this, aerodynamics are hugely important to a spacecraft's success, and two of the firms — Amazon founder Jeff Bezos' Blue Origin and Sierra Nevada's Dream Chaser — have been testing their designs in wind tunnels.

It's the first time that any real details of the Blue Origin Space Vehicle capsule (pictured above — Dream chaser is below) have been released: besides the suborbital rocket test launch, the company has been very secretive over its activities. The company's president Rob Myerson said in a press release that the unusual shape "provides greater cross-range and interior volume than traditional capsules without the weight penalty of winged spacecraft." Dream Chaser uses a design that seems more traditional than Blue Origin's, though still looks firmly rooted in science fiction.

Both designs are part of NASA's commercial crew development (CCDev) program, which received $50 million from government to fund the development of new spacecraft. They're competing with the likes of SpaceX to provide transport into space following the retirement of NASA's shuttle program. 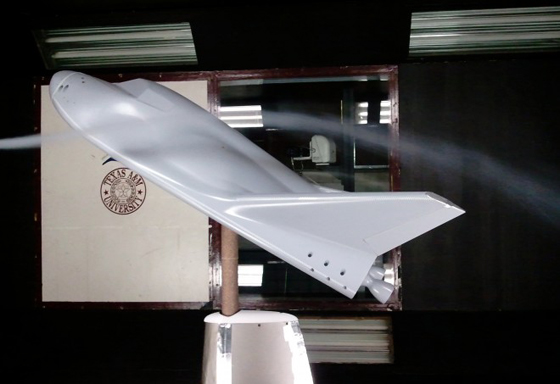 More from this stream SpaceX and Virgin Galactic: countdown to the era of commercial space flight