Share All sharing options for: BlackBerry 10: a closer look (video)

RIM has taken a page from Windows PhoneThe core home screen experience appears to be up to four "tiles" of information that are related to the apps they represent. They aren't strictly live screenshots of running apps in tile form, but RIM has taken a page from Windows Phone, where the tile displays related information custom-designed for the smaller space. You can tap on any tile to jump into that app, and then swipe up to go back to the home screen. Presumably there will be a grid of icons you can access somewhere in that home screen experience, but RIM hasn't shown it yet. However, we have seen leaked shots (which have been borne out by today's keynote) with just such a grid. Presumably given RIM's focus on gestures, it will be just a swipe away from the home screen. 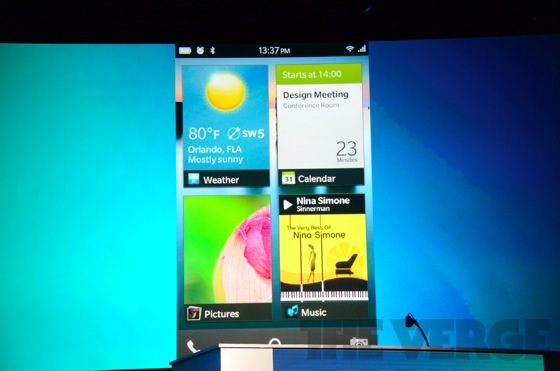 The home screen has three persistent buttons at bottom, for Phone, Search, and Camera. At the top is your standard status bar, which shows pertinent details about your various radios, alarm, battery life, and time. It does not show your notifications (those are made visible by a gesture), but the Dev Alpha device still has the classic blinking BlackBerry LED.

When you're within an app, you can swipe left from the right edge of the screen to reveal your notifications. A "half-swipe" will simply show your unread count from your various accounts, while a full swipe will take you directly into the messaging and email app. Once you're in that app (or within any Cascades-based app, we assume), you can tap to drill into an email and further into an attachment. from there, you can swipe from left to right to go up in the hierarchy. The behavior is just like how the PlayBook messaging app works now and the look and feel frankly owes a lot to webOS 3.0 and its Enyo app framework, marking the second time that RIM has seen fit to borrow from that platform. 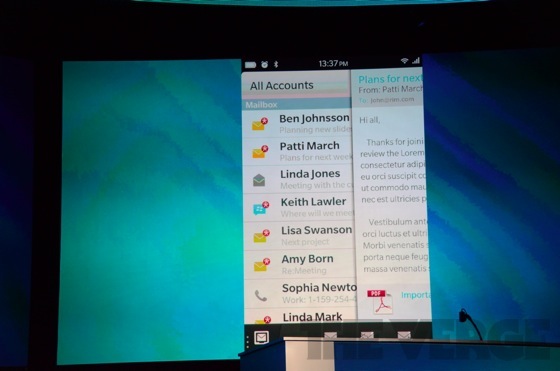 RIM says that everything will "flow."As far as the full multitasking experience goes, all we know is that RIM says that everything will "flow." Exactly what that means is maddeningly unclear, but a swipe to the right when you're at the top level of an app (say, your accounts in messaging) will reveal the app you last had open, which fades in from behind your current app. A half-swipe will give you a preview as it fades in rather than fully switching to it. Unfortunately, when a swipe to the right will be an inter-app gesture or an intra-app gesture isn't entirely clear yet, but you can be sure there will be partisans for and against whatever solution the company has come up with. RIM did hammer home the point that every app is fully running in the background and is not "paused" in any way as it is to some extent on pretty much every other smartphone platform out there. That behavior again is exactly how the PlayBook operates and assuming it doesn't destroy battery life, it could be a major advantage. 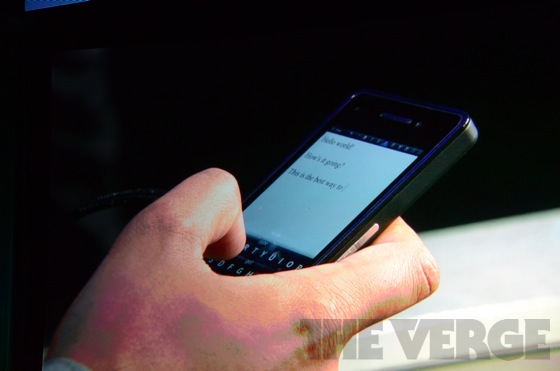 We've already discussed the new touchscreen keyboard to some extent, but it bears mentioning again that it looks really stellar. The ability to swipe up on a letter to automatically type a suggested word seems like a more powerful (if slightly less user-friendly) solution than the traditional word suggestion features we've seen on Android devices. We're assuming that the keyboard is powered in large part by SwiftKey given that the same software was uncovered in the PlayBook 2.0 OS, but neither RIM nor SwiftKey have confirmed that.

RIM also tried to position BB10 as a "mobility platform" instead of simply a smartphone and tablet platform. It pointed out that it can (and perhaps will) replace QNX as a powerful and pervasive car computer solution and hinted that it would likely be interested in finding other use cases for it. Given that RIM has repeatedly floated the idea of licensing BB10 to third parties, our suspicion is that we're more likely to see that arrangement happen with these non-standard mobile devices rather than seeing Samsung begin making BB10 phones.

BlackBerry 10 could be more than just phones and tablets

We saw the briefest of glimpses of the phone interface. The caller ID photo was large and answering or ignoring was a matter of swiping down or up. Once in a call, we couldn't help but notice one button, "Video Chat," but it's completely unclear whether RIM is rolling its own solution or partnering with somebody else.

On the multimedia front, RIM also showed the Dev Alpha device wirelessly streaming video, a feature we're beginning to expect from any smartphone. We also saw the camera, which as previously discussed is able to cleverly stay "live" when open and after you take a shot you can scrub forward or back in time to get it just right in case you missed a moment.

Speaking of partnerships, that's definitely one of the big unknowns with BlackBerry 10. During our conversation with RIM, they pointed out that there will be partnerships involved in the core experience of BB10 to shore up areas where RIM isn't as strong. Music and movies naturally come to mind, as BBM Music certainly won't be able to hold up as the main music solution on a platform as ambitious as BB10.

BlackBerry 10 and the devices it runs on should be out later in 2012, and we expect that RIM will continue the trend of teasing bits and pieces of it between now and the official launch. Jim Balsillie left the company a short time ago, and the rumor is that one reason is his plan to shift RIM more towards services was rejected. If that's true, in that context RIM has more riding on BlackBerry 10 than ever before — but even if BB10 is an intuitive masterpiece, there are a lot of other challenges to be overcome.