"90 percent of people consult with a friend or expert before making a decision," Microsoft says in promotional materials for the new Bing, announced today and rolling out over the next few weeks. The pitch sounds just like Google's plan for Search Plus Your World, which peppers your search results page with content from Google+, the company's social network. Except Microsoft's doing a few things differently: it's including social data from Facebook, Twitter, Google+, Blogger, and LinkedIn, Quora, and Foursquare coming soon.

"90 percent of people consult with a friend or expert before making a decision," Microsoft says in promotional materials for the new Bing, announced today and rolling out over the next few weeks. The pitch sounds just like Google's plan for Search Plus Your World, which peppers your search results page with content from Google+, the company's social network. Microsoft's doing a few things differently: it's including social data from Facebook, Twitter, Google+, Blogger, and soon, LinkedIn, Quora, and Foursquare. The idea is that these social results will be inherently more relevant than Google's simply by virtue of including more social networks, and in an unobtrusive manner.

With its "most significant" Bing update ever, is Microsoft the first to get "social search" right? Read on to find out.

Colors added below to emphasize each column 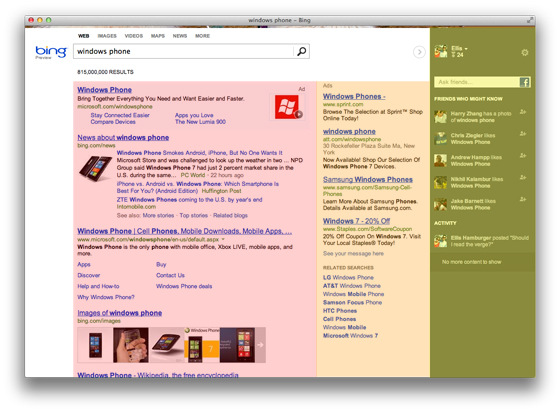 Microsoft thinks of its algorithmic search as a "fact finder," a provider of relevant blue links that points you in the direction of answers. And according to Microsoft, it's doing a pretty bang-up job at fact finding. In a blind study, Microsoft found that 34 percent of consumers in Q1 2012 found Bing search to be the best, while 28 percent liked Google and 38 percent were a draw. In stark contrast, one year prior (Q1 2011), 27% liked Bing results the most, 36% liked Google, and 38% were a draw.

In order to highlight its improving search results, Microsoft recently got rid of the left rail, eliminated social results from the main search column, and will soon move all contextual results to the "Bing Knows" middle column. Search results are still front and center inside Bing, but Microsoft VP Derrick Connell said, "search engines are great for helping us navigate to a website, but aren't so good at giving us perspective." That's the reason Microsoft decided to add the Bing Knows contextual column and the Friends Know social column: one for contextual results (like maps and prices) and one for social results.

Social content does sneak its way inside search results in some cases, however. If friends like Nike on Facebook, a little thumbs up will appear next to Nike.com that displays who likes that page when you hover over it. It works just like the person icon that appears next to Google results if your Google+ friends have +1'd that link.

"Bing Knows," known colloquially as snapshot, surfaces a huge variety of data points and figures from review sites and shopping sites like Yelp, OpenTable, TripAdvisor, FanSnap, and even Car and Driver (for reviews and prices). It also returns maps (like you might find in Google), price comparisons, and even a hotel room rate widget that lets you pick when you want to travel. "We're interested in how we can tap into all these new web services that we don't have to own," Bing Director Stefan Weitz told us. 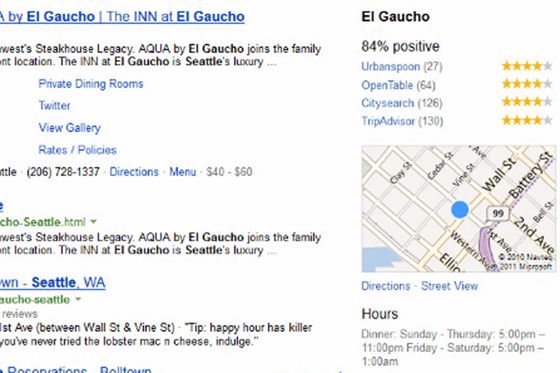 This is also the space where ads pop up, but we had mixed results with when and if ads showed up. Microsoft says ads will pop up in this space based on several factors it wouldn't go into detail about. While snapshot won't roll out for another few weeks, we saw it working in a demo and it's composed of things you've seen already — just moved into a separate column. The goal is to keep search results separate from contextual results like ratings, maps, and reviews.

The "Friends Know" space is the most striking part of the new Bing, offering results based on relevant friends on Facebook, Twitter, Google+, LinkedIn, Quora, Foursquare, and other social networks coming soon. "Friends Know" returns not answers but instead people you know that might know the answer — because often, there is no one answer for your question, "what bar should I go to tonight?" "We're taking offline behavior and moving it to net," Weitz said. 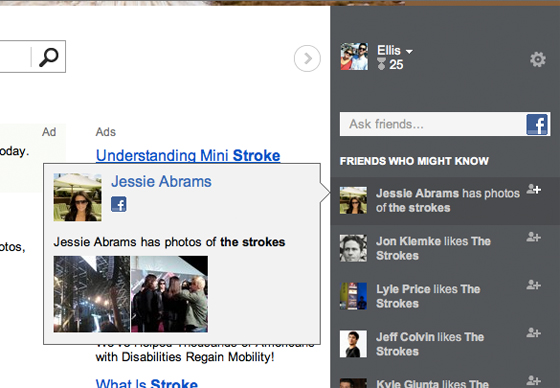 First and foremost, the social sidebar shows people who are interested in what you've searched. For example, searching for The Strokes yields a friend who has posted pictures of The Strokes and a friend who has liked the Strokes' Facebook page. You can ask these people questions by clicking their names, or you can just send them a text message. Lastly, if you're really stumped, you can query all of your Facebook friends by posting a question using Bing.

Weitz mentioned Foursquare, Quora, and LinkedIn as more recent targets for data assimilation that still need polishing and won't show up in results just yet. If at any point you want to get rid of social results, you can click an arrow hovering to its left and minimize the bar to a nice picture-filled column. It reminds us very much of the "jewel" sidebar in Windows 8.

If I search for "Windows Phone," a new section pops up under "Friends Know" called "People Who Know" that includes tweets from Windows guru Paul Thurott. You can reply to or retweet Paul right within the social bar. Search for "New York Times" and see a list of Times columnists who are on Twitter. You can tweet at these people right then and there. 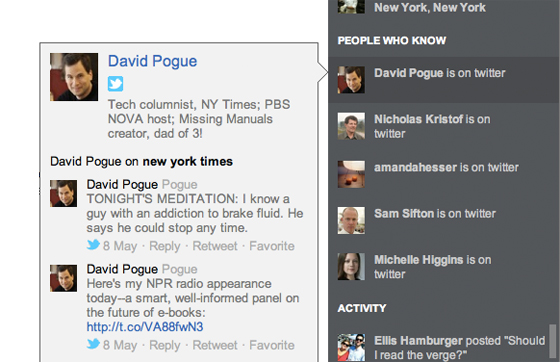 "People Who Know" aims to point out experts on topics like Windows Phone, seafood restaurants in New York, hotels in Miami, and so on. These "experts" come from Twitter, Blogger, and Google+, and soon, Foursquare, Quora, and LinkedIn. Microsoft isn't sharing exactly how they picked these people, but it seems to be the result of both algorithms and hand-picked candidates. Some topics don't surface related People at all, but others like "New York Knicks" surface exact matches — players on the team who use Twitter.

At the bottom of the social sidebar, the Activity section contains recent things you and your friends have searched (an opt-in feature), comments on Bing queries you've posted to social networks, and a few other things. In our tests, Activity didn't seem to be working very well, and we're not sure how useful it will be. We have no desire to publicly share our search queries and let others comment on them.

The new Bing is a futuristic and future-thinking search engine. The goal is to bring in as many sources as possible to give you the most informed answer to your query via the "fact finder" (search), "snapshot" (ratings and reviews), and "social" panes. It ends up working pretty well, while everything you'd expect to show up in the social bar doesn't quite yet. There are obviously some kinks to work out — for example, where are social search results on a Forcella, a pizza place I saw a friend check in to on Facebook the other night?

Once the new Bing accurately displays content from every social network, it promises a social search utopia. Imagine searching for a restaurant you're considering and seeing a few things: reviews from five different websites,organized by star rating inside the Bing Knows bar, then right next to it, a list of friends that have checked in to that restaurant across Facebook and Foursquare, and then even some pictures from Twitter of the restaurant's insane pasta fagioli.

The new Bing isn't there yet, but it's clearly heading in that direction with some tweaking and optimization. "We're annotating algorithmic results to actually get stuff done," Weitz told me. While algorithmic search results are still there, the new Bing points you towards real people who you can ask for information, because as VP Derrick Connell mentioned earlier, people want perspective and not just raw search results. If Microsoft can successfully integrate Bing with data gold mines like Yelp, OpenTable, Facebook, and Twitter, it could have a real edge over Google, which has alienated companies like Twitter and Yelp in the past. Bing's results aren't poor, but still haven't earned much mindshare, and rich partnerships and social results could swing the "future of search" in Microsoft's direction.

The new Bing begins rolling out soon, and you can sign up here to be notified.