Been lusting after a GeForce GTX 680 at a more affordable price point? Nvidia has done the inevitable and trickled its Kepler GPU architecture down to a more wallet-friendly level with the introduction of the GeForce GTX 670.

Been lusting after a GeForce GTX 680 at a more affordable price point? Nvidia has done the inevitable and trickled its Kepler GPU architecture down to a more wallet-friendly level with the introduction of the $399 GeForce GTX 670. The new card is based on the same DNA, in Nvidia's words, as the GTX 680, but nixes 192 CUDA cores and about a tenth off the base and boost operating speeds to arrive at 1,344 cores and 915MHz / 980MHz clocks. It retains the same generous 2GB video buffer, made up of 256-bit GDDR5 RAM, and in a standard configuration will ship with two 6-pin auxiliary power connectors. Nvidia rates the GTX 670's TDP at 170W, however if you run it in a completely stock config, the company says to expect something closer to 141W under load.

While touting the performance-per-watt ratio of its new card, Nvidia also makes a point to highlight that it habitually over-engineers its GPUs to handle higher clock speeds and power utilization than their rating — it'll be up to either you or add-in board partners to squeeze the most out of these chips. EVGA, Asus, Galaxy, Zotac, and other partners are already preparing cards with clock speeds of 1GHz and beyond, so out-of-the-box performance will likely vary slightly depending on your manufacturer of choice. 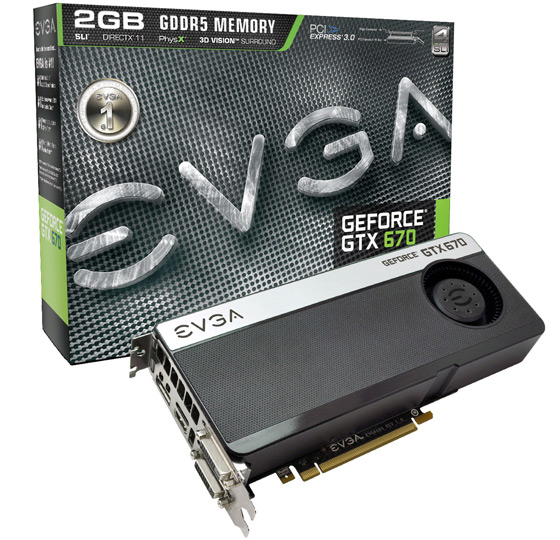 Two dual-link DVI outputs are available around the back, next to a DisplayPort 1.2 jack and an HDMI port. PCI Express 3.0 is supported, just as with the GTX 680. Having all those video outlets can be harnessed to do some triple-screen gaming, with Nvidia providing its own benchmarks showing playable frame rates are achievable in 5760 x 1080 resolution on some of the latest games: 41fps for Just Cause 2, 40fps for Deus Ex: Human Revolution, 37fps in Battlefield 3, and 49fps in Skyrim. As usual, we'd advise giving the professional reviews a thorough read to verify the GPU maker's claims.

The broad consensus is that the GeForce GTX 670 outdoes its most direct competitor, AMD's Radeon HD 7950, and offers more value for your money than the senior GTX 680 card. Having said that, it'll be up to Nvidia to actually deliver chips and boards at its promised price — shortages with the GTX 680 have pushed its cost up, hopefully the less powerful card will be easier to manufacture in bulk.