Facebook in New York: the search for 'universal truths' and the future of news

Last night I walked ten laps around Facebook's year-old New York office with Serkan Piantino, the newly anointed head of engineering operations in the city. Or maybe it was twelve laps. Piantino thinks better while he's walking, and disregards odd glances from coworkers as we do our rounds. As we walk I notice that meeting rooms aren't organized by number, but are instead organized by names like "Capable" and "Appropriate." Once you rent out a room for the afternoon, all you do is email your colleagues that you're in Appropriate.

Share All sharing options for: Facebook in New York: the search for 'universal truths' and the future of news

I spent some time last night at Facebook's New York office with Vadim Lavrusik, a "Journalist Program Manager" attempting to make Facebook as important a destination as Twitter for news. He handed me his business card, the face of which is covered with a grid of pictures featuring his Facebook friends. An engineer at the company whipped up the grid at his request in less than 15 minutes using the company's public API. On the backside of the card is an odd sentiment: "Journalism isn't dying. It is being reborn."

Facebook's had an office in New York for about a year now, and earlier that day, I walked ten laps around the place with Serkan Piantino (pictured), the newly anointed head of engineering operations in the city. Or maybe it was twelve laps. Piantino thinks better while he's walking, and disregards odd glances from coworkers as we do our rounds. He's best known for his leadership and work on News Feed — an interesting choice to lead Facebook's work in the middle of the New York media machine. As we walk I notice that meeting rooms aren't organized by number, but are instead organized by names like "Capable" and "Appropriate." Once you rent out a room for the afternoon, all you do is email your colleagues that you're "in Appropriate."

"The scale we've reached validates the way we approached this problem."

Inside several of the rooms we pass are Facebook employees sitting in front of enormous TVs with cameras pointed at them. Projected onto each TV is a table in another Facebook office with somebody staring right back. Piantino shrugs it off without a second thought, and says "video conferencing hardware is good these days." So what are all these people working on, anyway, thousands of miles from "MPK," Facebook's headquarters in Menlo Park, California? I can't get an answer. Not yet, at least. We dive into his work on News Feed.

Piantino started working at Facebook back in 2007, and has seen the company go through dozens of changes and phases all centered around helping people communicate what's going on in their lives more efficiently. He says that the News Feed team is constantly troubled by how to weight certain stories visually based on relevance and importance as more and more content gets added. "What do people want to see about their friends?" he asks. "There's a constant tension between consistency and flexibility." Facebook uses a complex algorithm to aggregate News Feed stories about friends and about specific topics like Apple. "We have to infer that you're talking about Apple the company, and not apple-picking," Piantino says. "It's remarkable how infrequently [Facebook's algorithm] is wrong. 500 million people per day see the News Feed. The scale we've reached validates the way we approached this problem."

I politely and more specifically prod again about what the office here was doing, in the heart of Madison Avenue and New York's media corridor. "Pages," he divulges, but then he quickly corrects himself. "Pages is among the many projects worked on at this office," he said. I start to think that maybe it isn't too clear why this office is here. Sure, there are the obvious reasons — Facebook needs an east coast bureau to scoop up college grads too afraid to travel west, and it needs to be close to the advertising industry in NYC — but it's clear the company is trying to grow and change more deeply as well. The office is a block wide, but a view down the hallways is obscured by the many flags draping from the ceiling, reflecting the wide-ranging backgrounds of the New Yorkers working here. But there's something else.

Piantino stumbles a bit when I ask about the difference between News Feed and a news website like The New York Times located just three city blocks away. It's as if he doesn't really think of the two media as different forms at all, but instead two brothers: one medium contains current stories written by friends, while the other contains current stories written by journalists. Like on a news site, Facebook must discern what's most important and display that content front and center. "We'd like to think we're building products around universal truths about communicating," Piantino says as we walk down a hallway with a perfect view of Grand Central Station and the Chrysler building. New York has promised those truths to generations of the media, and it seems like Facebook is ready to learn. 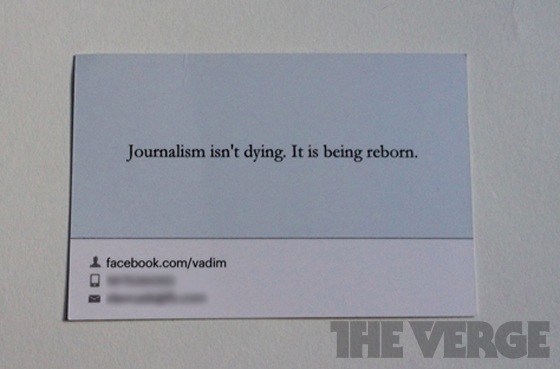