BriefMobile has rumored the LG LS970 "Eclipse 4G LTE," which is said to be powered by a 1.5GHz quad-core Snapdragon S4 processor paired with 2GB of RAM, and includes a 13-megapixel camera, 16GB of storage, and a separate radio capable of voice-over-LTE (VoLTE).

BriefMobile has rumored a new LG device with a feature list that looks like a smartphone-lover's dream. The LG LS970, which the site is calling the "Eclipse 4G LTE," is said to be powered by a 1.5GHz quad-core Snapdragon S4 processor paired with an Adreno 320 GPU and 2GB of RAM. It also includes a 13-megapixel camera, 16GB of storage, and a separate radio capable of voice-over-LTE (VoLTE). The phone itself, unhelpfully pictured from the back, appears to be a proof-of-concept prototype rather than a production-ready device, with an exposed aerial port and unfinished branding. 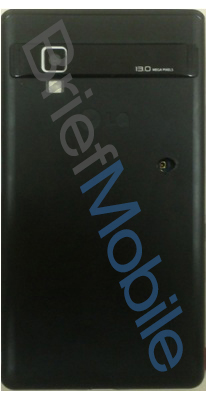 Current Snapdragon S4 processors benefit from integrated radios, but the setup apparently used in the LS970 consists of the APQ8064, an SoC that Qualcomm has demoed for use in tablets, and the MDM9615 radio chip. The separate radio is to be Qualcomm's first that can provide LTE voice and SMS functions without utilizing the processor. The combination is a very unusual choice for a phone, but with radio-integrated quad-core S4 SoCs not likely to arrive until 2013, it may be the only way of getting a quad-core S4 into a device this year. BriefMobile's contact expects the device to land in Q4, but with no real evidence that this device actually exists, we'll have to reserve judgement until we hear something more concrete.