I'm a little crazy about user interface design. And while I am no professional, new ideas for how software could or should work can keep me up late into the night, sketching in my Moleskine. About a week ago a really simple idea hit me as I was falling asleep: the App Switcher in iOS should be taller. 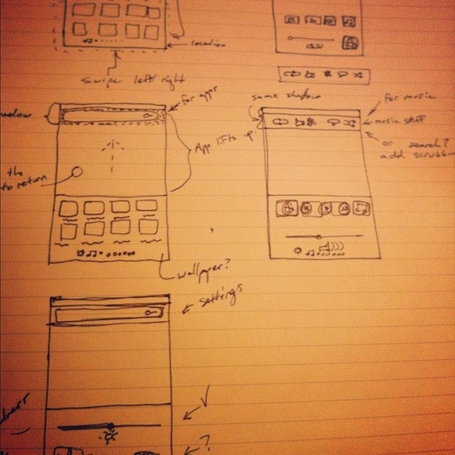 And why not? When you double click the home button and the screen rises, the status bar also vanishes, and you only have visible access to four apps. If you want to change the volume, you have to swipe over twice. Meanwhile, the raised app is taking up a lot of real estate.

So that's the problem, but the solution wasn't so clear. If my goal was to make the app switcher a new center of productivity and navigation, how would I do it without overdoing it? For starters, I needed to avoid adding things that you can't already do in iOS. In fact, keeping stuff that already exists in iOS is key, because it keeps the user from being overwhelmed. If they see things that they've seen before, they won't have to guess at what will happen when they tap it, and will feel a lot better about the experience. I also knew that I only needed to include things in the app switcher UI that added to the experience.

[If you're thinking "why not just go to the homescreen?" right now, I understand your sentiment. But this post isn't about how to do things as they stand now, it's about how things could be. So just imagine with me.]

The status bar was the first thing that came to mind. To me it actually seems more obvious to keep the status bar present than to be rid of it. The next thing that I wanted was another row of recent app icons. Having to slide through a half dozen pages to find an app can be a little frustrating (especially when you know that if you had two rows you would have only had to swipe three times). A search bar also made a good bit of sense to me. I don't use search on the iPhone that often for the sole reason that it's in a place that i rarely visit: the search page. By making Spotlight a part of the app switcher interface, I think I would actually use it throughout the day, rather than once a week. This is actually a big idea behind this whole concept: that you can have multiple tools in front of you at the same time that do completely different things, and that's OK. The iPad's app switcher is a great example of that.

I also wanted page markers at the bottom of the sliding section. A nice little music icon for the audio page and a gear for the new settings page would help the user understand where they are. This isn't anything new, as the search page on the home screen has it's own unique page icon.

So here's my solution (after more photo-shopping than I think I've ever done). You can click on any of the photos to enlarge them, which I recommend. On the left you can see the the app switcher as it stands in iOS 5, the right is in Dreamland. 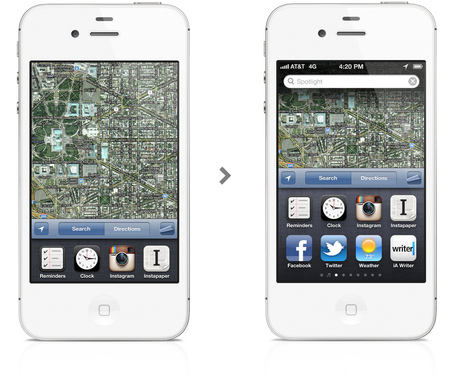 Starting with the bottom, I thought it would be really convenient to have the volume controls on the same page as the other audio stuff. Also sometimes when swiping to change pages I accidentally snag the volume slider and turn the volume up/ down, so it's good that there is some information space right above it. As you can see, I included the artist and album information along with the song. I would really like if you could switch the mute and orientation lock controls in the same way that you can on the iPad. Basically you would could chose for the mute switch on the side of the device to be the mute switch or the orientation lock. If the switch was orientation lock then the button on the music page would be the opposite. 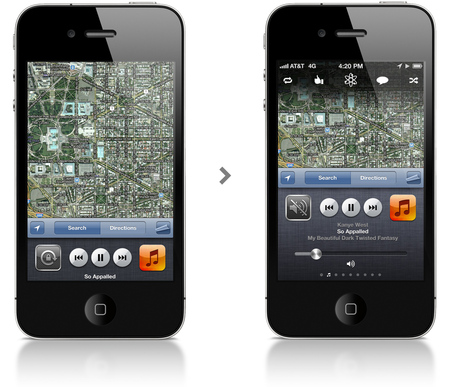 I would love for these controls to be fluid enough so that if you're listening to a song on Pandora, there would be buttons for thumbs up, thumbs down, bookmark song, etc. and the previous song button would disappear (because you can't go back on Pandora). Currently, if you're listening to Pandora and you hit the back button nothing happens, and that just seems so incredibly terrible to me. I would want every audio app to have access to this fluidity. 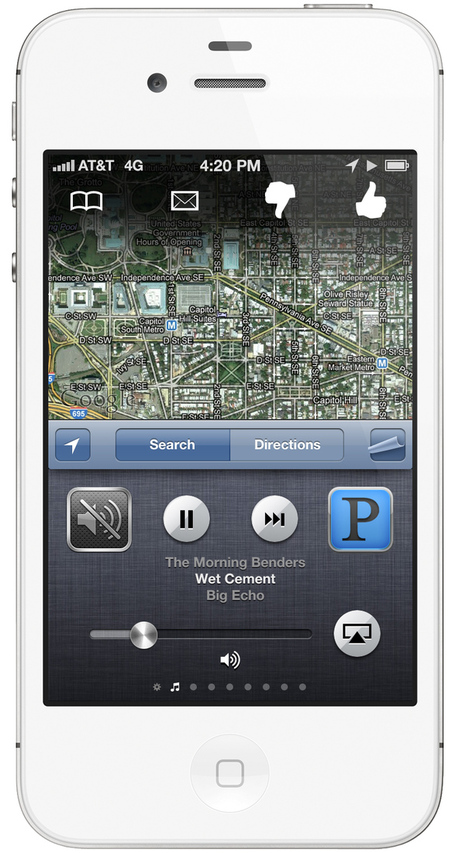 On the settings page, I kinda broke my rule of not introducing new things. As you can see, the antenna toggles below the status bar are a bit of an IntelliScreenX rip off. But I have to say (and if you've ever used IntelliScreenX, I think you'll agree) it is a really great implementation of controlling your radios. The blue icons are antennas that are turned on, the white ones aren't. If you hit the airplane mode toggle, it would turn orange and the rest would go dim (I would have illustrated this but I'm getting burnt out on Photoshop). 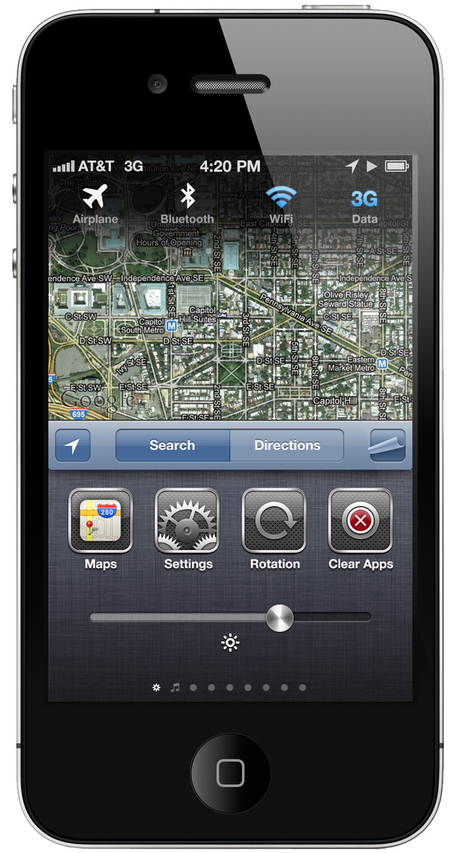 The bottom of the setting page houses four button and a brightness slider. Starting from the left, the "Maps" icon is basically a link to Maps' settings page in the Settings app. Depending on the app that is open at the time, this icon would change. The settings app is pretty obvious, it's the same as the Maps icon but it instead links to the main settings page. Rotation is self explanatory, it's a screen portrait orientation lock. The "Clear Apps" is definitively new. It would close all apps. I really debated this one because I wasn't sure how "ascetic" is was to basically admit that having certain apps running in the background can slow down your device. In the end though, I find myself closing all my apps from time to time so I thought it would be a worth-while addition.

I've read a couple of articles on thumb positioning on iPhone interfaces, and what I've gathered from them is that the center of the screen is where the important stuff is, because that is the easiest spot for your finger to touch. By that logic, I don't think that taking away about half of the raised app's space on the screen is a big deal, because your thumb will be able to hit the center of the screen more easily than the search bar or the bottom row of apps. So basically, nothing is lost with these additions.

But I want to know, what do you think of the app switcher? Do you love it how it is and don't want it to ever change? And do you think my ideas are an improvement or just make everything less useful and more confusing?

First off, I can't thank you enough for the positive feedback that I've received. It's totally blown me away. Second, I've been working with software developer John Coates to develop my concept into a tweak that can be downloaded through Cydia. It will be called Switchy. It won't have everything that you see above right away but as we develop it over time, more and more features will be included. I will post the repo's URL here once it goes live. Again, thank's for all the great feedback, ya'll are awesome!

You can now download Switchy for $1 through Cydia from the BigBoss Repo.

Switchy in the News: