A leaked build of Flipboard for Android is already receiving its first over-the-air update to address stability with an older version of the OS.

Flipboard for Android, set to be a temporary exclusive for Samsung's Galaxy S III, isn't yet available through any official means. But users who installed a build of the app that was unceremoniously ripped from Samsung's upcoming handset are today receiving notification of an available update, from none other than Flipboard itself. Version 1.8.4 is now appearing as an in-app over-the-air upgrade, with release notes indicating that it addresses a startup crash on an unspecified "older version of Android." Reports of successful installations are mixed however, with some users saying the update goes through without a hitch, and others being met with errors. 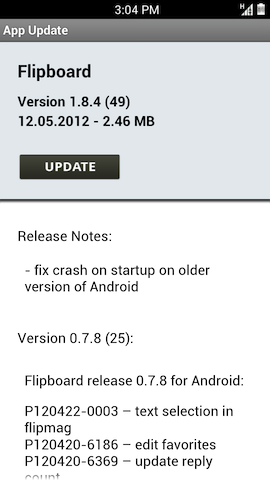 The update doesn't necessarily indicate that Flipboard is endorsing the leaked build of its app, but it would seem the company is already looking ahead to the day Samsung's exclusivity window wraps up.