MVNO Voyager Mobile, which had hoped to launch low-cost unlimited wireless plans starting at $19 today, has postponed its launch due to what it describes as a "network attack."

Last night we reported on Voyager Mobile, a new MVNO that planned to offer unlimited voice and texting plans starting at $19 a month. Voyager's website was set to launch earlier this morning, but was taken offline almost immediately thereafter due to what the company is calling a "malicious network attack." It's unclear just how long the site was actually active, if at all; the company tweeted that the site was live at 6:02AM EDT, but the missive was replaced just five minutes later by another tweet indicating that it was down due to the alleged attack.

According to a message on the company's website, it now expects the service to be launched "in the very near future." We've reached out to Voyager Mobile for additional information and will let you know when we hear more. 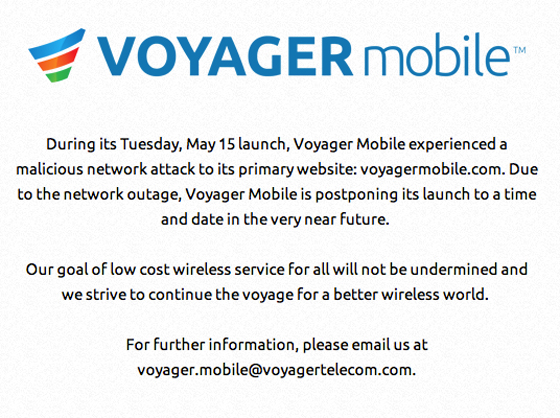