It's no secret that Japan has an aging population, and that means that there's a sizable market of people who either won't learn the ins and outs of today's advanced smartphones or are unable to afford the latest devices. There are options for elderly customers in the country, such as Fujitsu's Raku Raku Phone series, but with the inevitable shift to smartphones means carriers risk leaving some behind. With that in mind, Fujitsu and Docomo are releasing the F12-D, which is the very first Raku Raku Smartphone. It's an Android 4.0 device with a 1.4GHz processor, a 4-inch 800 x 480 display, and an 8-megapixel camera, and it's quite unlike any Android phone you've seen before.

"Raku raku" means "comfortable" or "easy" in Japanese, and it's clear from the moment you switch the screen on that the F12-D has been designed around those principles. There's a single home screen that scrolls from top to bottom, and all the most frequently accessed features are highlighted right at the top — the first thing you'll see is a big phone button, along with others for mail and contacts, and there's a simple weather widget right below. The home screen also includes a button to display your own phone number in a pinch, a shortcut to technical support for the device, and access to services such as 1seg TV and Docomo's Siri-esque Shabette Concier voice control app.

Tapping these buttons actually requires a little more force than on most phones, as you're required to press down for a split-second before the input will register. Combined with some basic haptic feedback, this is designed to eliminate accidental presses and simulate the response of real buttons.

The F12-D also does its best to help out people who are hard of hearing — along with some standard noise cancellation techniques, the phone will also actually slow down the voice on the other end to make it easier to understand. This feature can also be found in the bone-conducting Kyocera Urbano Progresso, another Japanese phone designed to combat the effects of hearing loss. 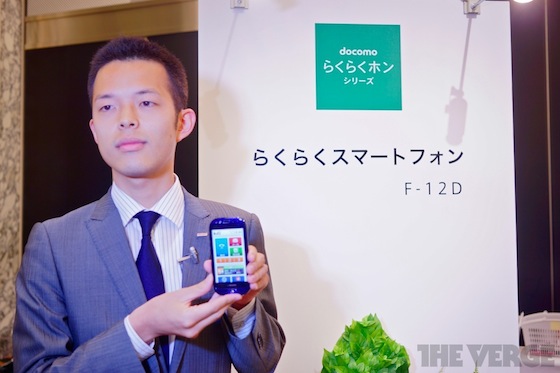 Another barrier to smartphone entry that the F12-D aims to remove is that of price. The device's monthly plan will come in at ¥2480 (about $31) less a month than a standard "unlimited" (up to 7GB) LTE package from Docomo, with users paying ¥2980 ($37) a month. Docomo will throttle data to 128kbps if users go above 500MB in a month, but that's perhaps unlikely to be an issue for the device's target market — especially considering that they won't have access to the Google Play Store.

Overall, we were impressed by Docomo and Fujitsu's effort to design a smartphone interface for a potentially untapped market. The interface is logical and well-thought out, and the hardware seems to cope with its demands well enough. It remains to be seen if it will be the device to prise elderly Japanese citizens away from flip phones and hardware buttons, but it's as good an attempt as we've come across.