Google Music has begun limiting users to four device deauthorizations per year, causing problems for people who have wiped their devices or installed a custom ROM, which creates duplicate device listings.

Google Music users who like to flash custom Android phone or tablet ROMs or restore their devices frequently may soon find themselves unable to play music on them. Users on the xda-developers forums have recently been complaining that they're no longer able to remove duplicate phones because of an apparently new policy that limits accounts to four deauthorizations per year. Since a new device ID seems to be created any time a phone is wiped or custom firmware is installed (you can see this below, where the same HTC phone is listed once for each new ROM), this means that a single device could eat up all your authorizations. Google's current policy states that "you can only revoke access to four devices per year," and we've confirmed that flashing custom ROMs creates duplicate entries in Google Music.

We've reached out to Google, but at this point, we're not sure how long this policy has been in place; one user has been told that it happened within the last 60 days. Other music services have deauthorization limits as well, but Google's is unusually stringent: Zune Pass, for example, lets users remove a device every 30 days. If you do end up exceeding your device limit, you may be able to get around it by restoring a backup or contacting technical support, but so far the policy has the potential to create some serious problems.

Update: Google has suspended the limit while it looks for a "fix." 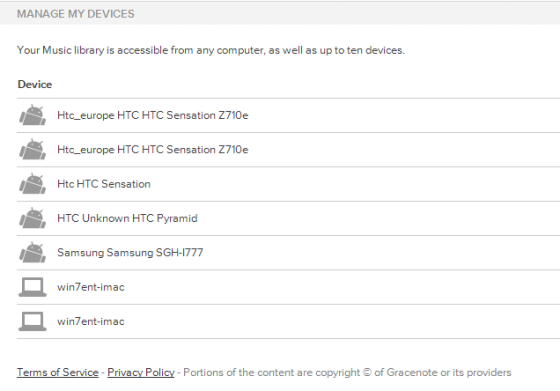 Update: As of this afternoon, Google appears to have reversed the decision, and we're now able to deauthorize more than four devices, although the support page still lists a maximum of four.