HTC's US One X and Evo 4G LTE use a customized version of Android that removes the offending "data tapping" feature and does not exhibit the key behavior excluded from importation into the US by the International Trade Commission.

The HTC One X for AT&T and Evo 4G LTE for Sprint already bear the distinction of being the first Android devices to face an import block at US Customs for potentially infringing an Apple patent, but the ignominy may be fleeting: sources tell us that HTC's US devices use a customized version of Android that removes the offending "data tapping" feature. That's confirmed by our own examination of an AT&T One X and Sprint Evo 4G LTE, neither of which exhibit the key behavior excluded from importation into the US by the International Trade Commission, and which both include a new settings screen not present in the international One X.

Specifically, the ITC found that HTC's messaging app, the stock Android messaging app and the stock Android browser all infringed claims 1 and 8 of Apple patent #5,946,647 — but the ITC also specifically found that Apple's patent claims were limited to the system both detecting data structures like phone numbers and email addresses in text and then presenting a menu of options when those detected structures are clicked. While HTC devices shipped to the rest of the world may still exhibit that behavior, we can confirm that neither the AT&T One X or the Sprint Evo 4G LTE present the offending menu: tapping on a detected phone number or email immediately launches the dialer or email client. What's more, the US devices also include a new "app associations" settings screen where users can specify default apps for things like email and maps; international devices lack the screen and pop up a context menu when an email address is clicked for the first time, as shown below. 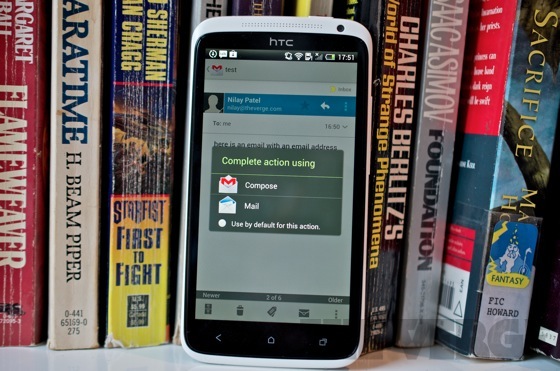 Whether or not these changes are enough to put the One X and Evo 4G LTE in compliance with the ITC exclusion order is currently unclear; Customs has broad interpretive power in the matter, and the agency is notorious for the secrecy of its process. At the very least, it's clear that Apple's formidable patent portfolio is starting to have an impact on Android beyond the design changes we noticed at MWC; HTC is now shipping handsets with substantially different functionality in the United States than elsewhere in the world.