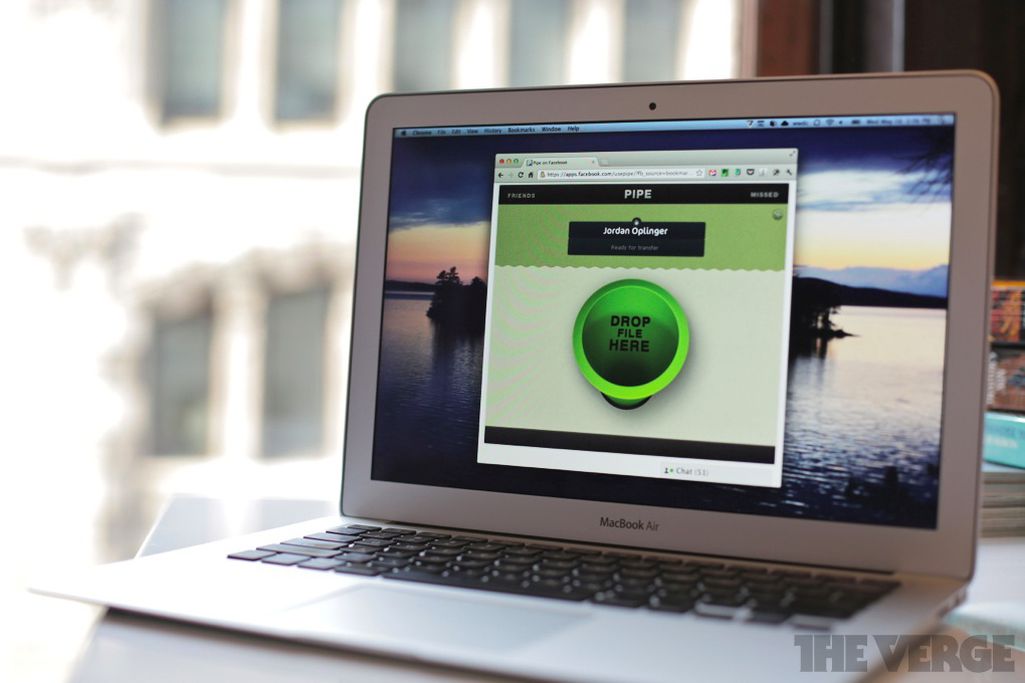 "We've set up the hottest club in East Berlin, and we're going to start letting people in next week," Simon Hossell told me in an interview last Friday. He's talking about Pipe, a new app launching soon that lets you send files up to 1GB to friends in real-time and without leaving a trace. There's no upload or download — you simply drop a file into an onscreen pipe and it pops out the other end on a friend's computer — just like in a German discotheque?

Hossell envisions Pipe as a party, of sorts, because 900 million people on Facebook instantly have access to it without installing any software, and without signing up for yet another service. So Hossell thinks of himself as the party planner, but is Pipe anything to celebrate? The company has been undercover for about a year, and today we’re finally getting a look at its app. Read on to check it out.


Sticky TOC engaged! Do not remove this!
Hands on 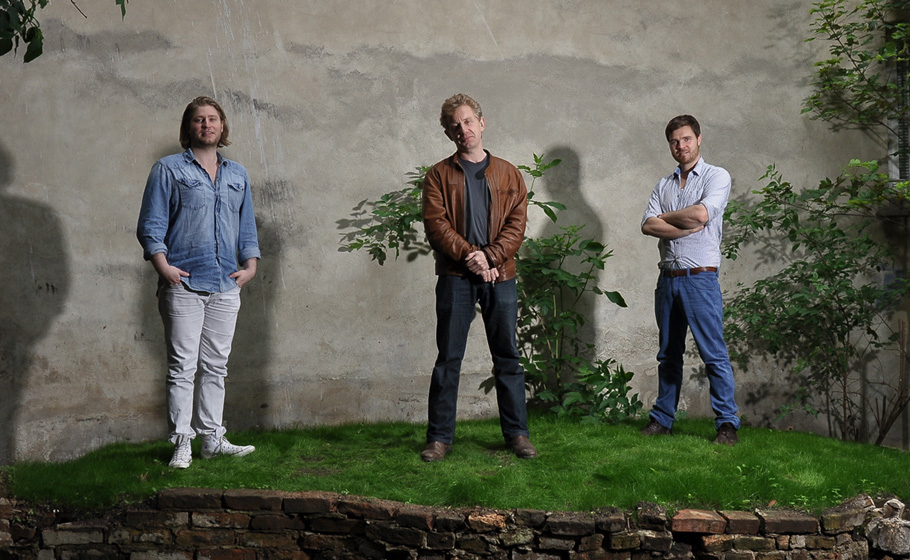 While Hossell is no rock star, he kind of looks like one perched atop a grassy platform with his teammates, Marco Rydmann and Philip Eggersglüss. Eggersglüss has a background in law, and serves as the company’s operations guy tasked with keeping everybody focused and making sure things get done. Rydmann is the designer behind the app’s UI aesthetic and minimalist affect. Hossell himself spent the last several years as Sales Director of Gracenote (the music metadata service) in Europe, and is now the team’s CEO and head of strategy, deal making, and recently, investor relations. There are a handful of others at Pipe, but they’ve all been under the radar since they started coding last summer, offering only GigaOM a brief look inside the app back in March. The team works out of the Torstrasse 111 (pictured), an artist co-op and studio space in East Berlin’s growing tech scene. “We’re fifty yards from the first Burger King in East Berlin” Hossell said, “but now it’s a two-floor trendy internet cafe swarming with startups talking over coffee.”

Hossell connected with the others through a mutual friend who thought they would get along having operated in the mobile space for years. Rydmann and Eggersglüss had previously created Songbeat, a digital music player that was eventually purchased by German Spotify competitor Simfy. Once the three finally met up after a couple months of anticipation, they were immediately on the same wavelength. “We took out blank sheets of paper and decided to build something from scratch. Marco came up with the concept of the pipe — the notion of a direct one-to-one connection,” Hossell recalled. “The inspiration subconsciously came from Super Mario. Mario jumps in one pipe, appears out of another, and that’s all you need to know. And that’s what Pipe is.” There are plenty of Dropboxes and CloudApps out there, but the group saw a niche for people who want to share files of any size instantaneously. “What seems to be lacking is real one-to-one connectivity,” Hossell said.

Facebook is most importantly the friends list Pipe needs to get started. The team made a “tactical decision” to build on the enormous, pre-established network Facebook has created so users don't have to sign up for yet another service. Hossell points out that most people also naturally gravitate towards services where you're communicating with credible identities. Using Pipe, you're not only transferring a file to somebody you're friends with, but you're transferring the file to somebody who's currently online. Sharing files asynchronously using apps like YouSendIt has its benefits, but there are a few big drawbacks most people haven’t thought about. First, there’s a risk that the sharing link you've sent somebody gets misplaced and used by strangers. Additionally, managing files you’ve uploaded to the cloud can be a pain since there are generally size limits on uploads and account storage capacities. Lastly, these apps typically throttle upload and download speeds since you are using their servers.

Pipe, on the other hand, transmits files to friends who are online, hence, these downloads cannot be accessed later by anyone. There’s also no need for storage or bandwidth on servers, since Pipe creates a peer-to-peer connection that lets you take full advantage of your connection and never throttles uploads or downloads. The download progress meter (a bar of light that fills the rim of the pipe) you see on your screen is the same one your friends see. But there is one more thing Hossell wants to avoid: data security drama. “People are starting to look much more closely at the privacy policies of Dropbox, Google, and Microsoft,” he said, “and are realizing that through innocuous language these companies ask users to give them all sorts of permissions for what to do with their content. If you're sending files from browser to browser, you don't have any of those issues about privacy without being snooped on.”

During our interview, I asked Hossell for some screenshots of Pipe since I wouldn’t get to use it for another few days. Hossell couldn’t figure out how to send a file using Skype. "This is making my point better than I'd really like," Hossell says as he giggles, half embarrassed, half proud. Pipe doesn’t offer many options or bells and whistles to attract power users, but it does offer just about the simplest way to send a file to a friend. There are no plans to let anonymous users utilize the technology to share files. In fact, Hossell is pretty emphatically opposed to the term “sharing” when it comes to transmitting files to a friend online. Having worked at Gracenote, Hossell has developed an intimate relationship with digital rights and is evidently distressed by the thought of people using his product to illegally share files. “Share has some negative and erroneous connotations,” Hossell vented. “‘Sharing files’ has come to mean strangers passing things on, and more often than not, people uploading documents to third parties. We are very clear in our terms and conditions that we are focused on legal use of this technology.”

The appeal of Pipe can't be witnessed on paper, but is instead evident in its visual simplicity. You drag a file from your desktop onto a Super Mario-esque green pipe on your screen and the file disappears, transferring in real time to a friend on the other end of the pipe. The file appears on your friend's screen, and that's about it. "It's simple and it does its job," Hossell said, and that's the point. "Do less" is the school of thought Hossell subscribes to. "We had a lot of discussions about the pipe," Hossell said, "and the sense of relief you get from dropping a file into it. You can feel the volume. It feels like a real pipe coming out of your desktop."

No data passes through Facebook or Pipe’s servers, and all transfers use 128-bit AES encryption. "We're only using Facebook's handshake that establishes that two people are friends," Hossell told me. "We establish a direct connection between my computer and your computer." File transfers work using Adobe's Real Time Media Flow Protocol (RTMFP), which allows direct peer-to-peer connections between two web apps without either user having to install additional software besides Adobe Flash. There's no intermediary server, and there are no limits to how quickly you can upload or download data. The only obstacles you might encounter are the bandwidth you get from your ISP, and the 1GB “theoretical file size limit” your browser’s cache imposes on the transfer. If you have a bunch of windows and a YouTube video open, the size of files you can send decreases. During my tests, even after a fresh cache wipe and new browser instance, I couldn’t transfer files any bigger than 600MB, but according to Hossell, there are still a few kinks to work out. His team has been successful overcoming past roadblocks like tricky user network configurations and overzealous firewalls.

Should you use this?

Hossell and company built Pipe as a flexible product with an eye towards other platforms, and that’s where Pipe’s long-term value and utility lies. As simple as it is, Pipe struggles to find the perfect scenario where you’d want to use it. With small files, email still works just fine, and with big files — videos, quite frequently — it’s easier to upload the file to Vimeo or YouTube and then let a friend stream it. Plus, since Pipe relies on browsers, which are among the most volatile of applications, you never know when the browser itself is going to crash, ending your transfer.

Fortunately for Pipe, the technology here is impressive and doesn’t in any way rely on browsers. Apps for Mac, Windows, iOS and Android are in the works, and will allow users to quickly send large files to friends who are also signed on. Since these apps will work outside of the web browser, the only limit to how much you will be able to send is the local RAM on your device or computer. Since Pipe runs on Adobe AIR, porting the app to a variety of platforms is pretty seamless. So while Pipe chose Facebook as its first platform because of low barrier to entry, perhaps that fact diminishes Pipe’s utility. It’s disguised as a way for Facebook friends to exchange files, when actually Pipe is an ingenious streaming file transfer platform anyone should be able to use.

Towards the end of our talk, Hossell revealed that his company isn’t called Pipe, but is actually called Pipe Dream Technologies, a humorous jab at the hopes and dreams of many tech startups. “I thought it was kind of funny,” Hossell said. Investors think the joke is pretty funny too — Pipe Dream is approaching its first round of funding after having been entirely self-funded since day one. While Hossell is glad to get some help from investors, it’s obvious that Pipe is a project fueled in large part by passion and without much outside influence. Hossell said, “We’re going to build the damn thing, get it out there, and show it’s an awesome idea. We don’t need to demo using PowerPoints.”

So Pipe isn’t launching quite yet. I’ve been told that a release is “imminent,” but there’s no set date yet because the company wants to generate some buzz and finish polishing up the app. “You know how when you arrive at a gig and you aren't quite sure when the band's going to come on?” Hossell asked me, returning to his rock star persona. “That’s right now.” 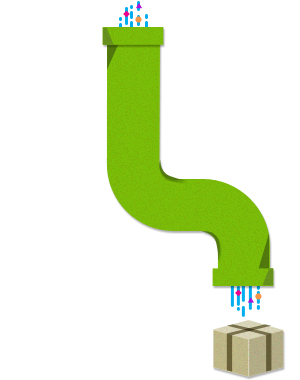