One's Street Tweeter paints your political statements on the pavement

One's Street Tweeter paints your political statements on the pavement

The advocacy group One has created the Street Tweeter, a machine that prints out 40-character messages sent to it via Twitter in an effort to raise awareness for hunger and poverty issues in anticipation of this year's G8 Summit.

We've seen tweets printed out and read aloud, but what about tweets painted onto asphalt? That's what advocacy group One has created with the One Street Tweeter. Described as a "gigantic ink-jet printer on wheels," the Street Tweeter is part of the group's efforts to raise awareness for poverty and global hunger issues in advance of this year's G8 Summit. Users can tweet 40-character messages to the associated Twitter account — or submit them via One's website — and the machine is then taken to various locations where the missives are painted onto the ground using water-soluble paint. The group began the campaign this past Tuesday by using the device outside a research facility in Maryland, painting out the tweets at a speed of five miles an hour, and last night stepped things up by taking it to Pennsylvania Avenue in Washington, DC. The Street Tweeter will be making appearances up until the Summit starts on May 18th in Maryland. If you're so inclined, you can participate by sending in your own message now. 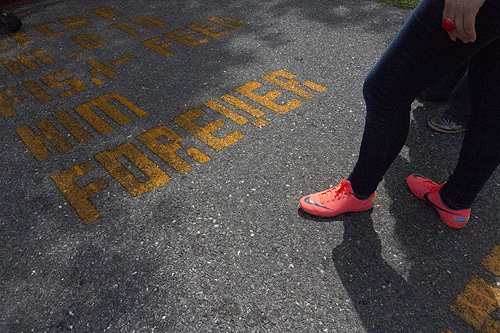