HTC Evo 4G LTE claimed for May 23rd launch by Best Buy, but it's not a sure thing

HTC Evo 4G LTE claimed for May 23rd launch by Best Buy, but it's not a sure thing

Best Buy is sending emails to individuals who've pre-ordered the HTC Evo 4G LTE with an updated release date of May 23rd, but HTC will not confirm it.

Customers who've pre-ordered HTC's upcoming Evo 4G LTE for Sprint from Best Buy are now receiving order status update emails from the company claiming a revised release date of May 23rd, bumped from the original May 18th (tomorrow). Of course, the 18th date was scuttled after shipments of both the Evo and AT&T's One X were held up in US Customs earlier this week over an ongoing patent spat with Apple.

HTC has responded with an official statement, though, and it's less direct:

HTC is working closely with U.S. Customs to secure approval for shipments of the HTC One X and HTC EVO 4G LTE. We have not made any announcements about a new launch date and will provide an update on availability as soon as we can do so confidently.

Will the 23rd bring good news, then? Until Customs releases the phones, it seems unlikely Best Buy (or anyone else) is in a position to peg a delivery date — but here's hoping. 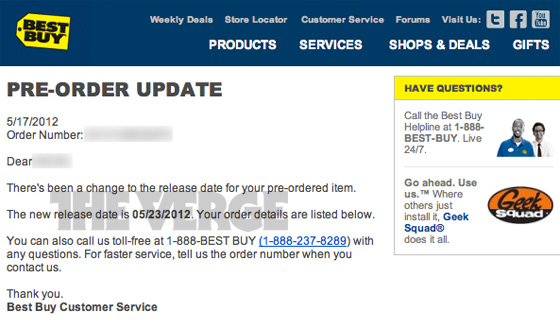