RIM, Motorola told Apple they could find a nano-SIM compromise: here it is

RIM, Motorola told Apple they could find a nano-SIM compromise: here it is

A new nano-SIM design proposal from Motorola and RIM seeks to strike a compromise between Apple's proposal and an older submission from Motorola, RIM, and Nokia.

Just hours ago, RIM and Motorola submitted an updated proposal for the design of the so-called 4FF nano-SIM, a smaller replacement for the 3FF micro-SIM used in many phones today (most notably the iPhone 4 and 4S). Debate between competing nano-SIM designs — one from Apple, another from a joint group of RIM, Motorola, and Nokia — has grown intense over the past several months within the European Telecommunications Standards Institute (ETSI), the body ultimately responsible for SIM standardization worldwide. The latest proposal from RIM and Motorola is pictured above.

Understanding the genesis of this new design (and what exactly it means) requires looking back at the ETSI's last nano-SIM meeting in late March, where members had expected to vote between the two competing proposals. Nokia had publicly complained that Apple's design made it too easy to inadvertently jam into an older micro-SIM slot, and in response, we were told by SIM maker Giesecke & Devrient at CTIA last week that the design had been tweaked to prevent such a jam from occurring.

Here's the precise wording of the requirement — laid out by the ETSI — that Nokia had been referring to:

The design of the fourth UICC form factor shall prevent the 4FF from becoming jammed in a MiniUICC reader. An example is that if the 4FF is turned 90 degrees and it fits perfectly into the MiniUICC reader (4FF length = Mini-UICC width).

At the March meeting, debate was fierce among delegates from top-tier carriers and OEMs from around the world. RIM prepared a slide deck to defend its joint design, noting that "the Apple proposal does not showcase any usability improvements over the previous form factors to enable a variety of reader implementations." Though RIM's design was more radical, breaking compatibility with the contacts on larger SIMs, the company argued that SIM adapters are "thicker and out of spec," don't hold cards securely enough, and ultimately lead to higher return rates — in other words, customers shouldn't be using adapters to move between devices in the first place.

Eventually, the committee chairman decided to hold an informal vote by show of hands whether each of the two proposals adequately met the jamming requirement. For the Apple design, seven voting members said it did not, 28 said it did. For the joint Nokia / RIM / Motorola design, it was a very different story: 23 members believed that it could be jammed into the wrong SIM slot, while just six said the requirement was met.

Of course, it was a case of voting along party lines. It turns out that Apple's 4FF SIM is a joint effort with a significant number of voting entities: AT&T, Deutsche Telekom, Orange, Gemalto, Giesecke & Devrient (which actually wouldn't tell us which way it was voting when we spoke to it at CTIA), Telecom Italia, Telefonica, Verizon, and Vodafone, among others. The competing standard was underwritten by Nokia, RIM, and Motorola alone.

After the vote, the chairman acknowledged that "no agreement could be reached on stating that any of the two solutions meets all requirements," though Apple's design clearly had the most momentum. Ultimately, debate on the two proposed designs proved so fierce that a final vote was postponed.

Eventually, discussion at the meeting turned to a very grim realization: unless RIM, Nokia, Motorola, or Apple backed down, a two-design standard could result. In other words, different phones could use entirely different SIM designs, a nightmare for everyone involved — manufacturers, carriers, and consumers alike.

How many carriers would stop carrying the iPhone over its SIM design anyway?

Motorola and RIM then floated the idea of finding a compromise by merging the two proposals into one, a notion supported by Samsung. Apple, meanwhile, stated that it didn't think that was possible, but that it was open to adopting both proposals. The reasons for Cupertino supporting a two-design standard aren't entirely clear, but they're easy enough to guess: at that point in the meeting, Apple already knew that it had somewhere around 80 percent of the voting body behind its standard from the chairman's previous show of hands. And realistically, how many carriers would stop carrying the iPhone over its SIM design anyway? Apple's pioneering move with the micro-SIM in 2010 ultimately led to broad-scale adoption — presumably, it has no reason to think it can't push nano-SIM with even more force than it could two years ago.

That March meeting ended without a vote, without a decision, and without a final nano-SIM standard. Privately, Apple expressed "disappointment" that a vote hadn't taken place.

After that meeting, RIM and Motorola apparently got to work on a design that took elements of both Apple's design and their own. Today, the two companies submitted that revised proposal. 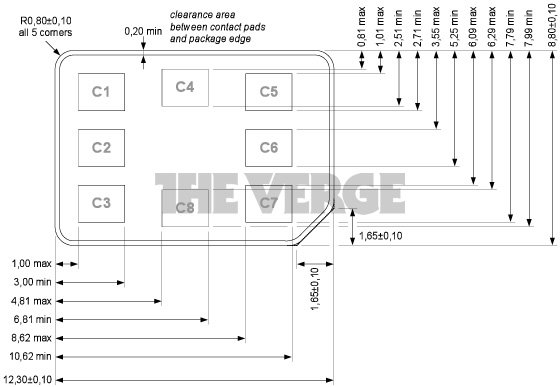 and the original joint design of Nokia, Motorola, and RIM: 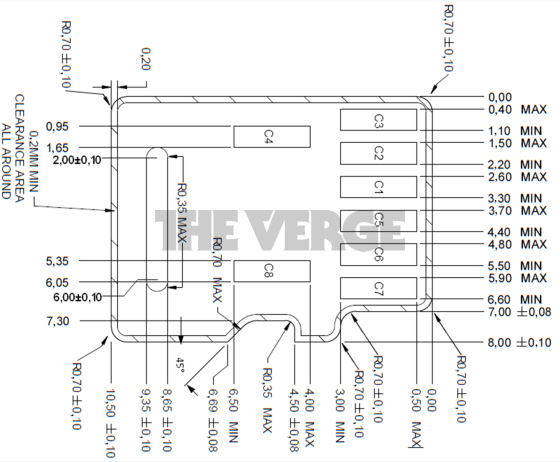 You can see which elements of which original proposal were included in the compromise — it's 80 percent Apple and 20 percent RIM / Motorola. The outline and contacts are carried over from the original Apple design, meaning that it'll still be backward-compatible with larger SIMs when used with an adapter. In fact, the only important element that they've added is a notch on one edge, a feature that RIM says would enable "push-push" mechanisms for storing the nano-SIM in devices — push it into a slot to secure it, push it again to pop it out. Without that notch, the design would necessitate a tray to hold it in place.

Will Apple back down now that Motorola and RIM have done the design work for them?

At the March meeting, Apple had objected to the addition of a notch, claiming that it would extend time to market by reducing the space for silicon inside the SIM, which in turn reduces the options for sourcing that silicon (presumably because SIM manufacturers wouldn't be able to simply use the same silicon they'd used in micro-SIMs). Motorola said it was "surprised" that Apple would try to make this an argument against creating a standard, while RIM expressed doubt that the long tail would be the nano-SIMs themselves, pointing out that it takes time to design phones that can accept the nano-SIMs in the first place. Will Apple back down now that Motorola and RIM have done the design work for them? Nokia, interestingly, is missing from this most recent proposal, suggesting that it may have taken its ball and gone home; whether it's in support of the revised RIM / Motorola solution is unclear.

The next meeting of the working group responsible for the standard takes place on May 31st and June 1st in Osaka, Japan. We expect to hear whether the compromise is accepted by Apple, its partners, and the remainder of the ETSI voting body there if not sooner — Giesecke & Devrient had indicated to us last week that remote voting was already underway, but it's not clear whether this latest proposal supercedes any existing vote.

More from this stream The nano-SIM standard: manufacturers take sides over the shrinking SIM card