As Facebook CEO Mark Zuckerberg rang the NASDAQ opening bell when his company's stock went public earlier today, something else happened: his Facebook page automatically posted a status update. "Mark Zuckerberg listed a company on NASDAQ," it reads, an almost prophetic update from a social Bloomberg terminal, of sorts. Since the status update went out, over 363 people have liked it, including Zuckerberg himself and product boss Sam Lessin.

So how did he do it? Facebook Senior Engineer David Garcia told TechCrunch that he suggested the idea to Zuckerberg over lunch this week. Zuckerberg responded, "It would be epic if you pulled that off." Garcia and company spent three days figuring out how to rig up a cell phone to the opening bell button that would trigger a Facebook update when pressed. The update utilized Facebook's Open Graph API to essentially turn the opening bell into a Facebook-integrated application. They used the phone's headphone jack to accept an electric current from the bell button, which took a bit of soldering and a trip to RadioShack. While the hack was a bit of a publicity stunt, it indicates that it's very possible to create physical pieces of hardware that trigger Facebook updates. Imagine: a Facebook account for your garage door opener. 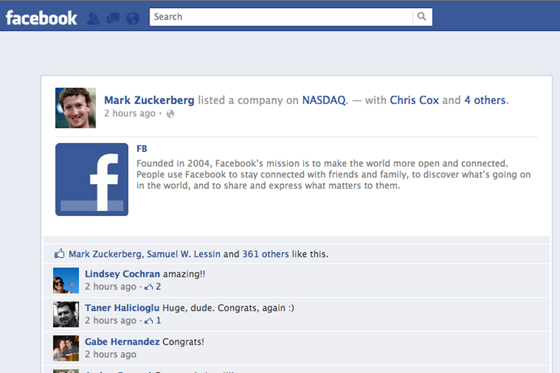