The firmware for Samsung's Galaxy S III has leaked a little over a week ahead of the device's release, including an APK of Siri competitor S Voice.

The firmware for Samsung's Galaxy S III has leaked just over a week ahead of the device's release. While you can't flash the ROM to another phone just yet, developers are able to poke around inside and could be bringing elements of the TouchWiz Nature UX experience to a wider audience at some point. The first major finding to come out of the leak, however, is an APK for S Voice, Samsung's Siri-style voice control application. It seems to work on any device running Android 4.0 — we tested the app on a Galaxy Nexus and a Sharp Aquos Phone, and got it up and running largely without issue barring a couple of crashes.

Obviously, we don't want to pass anything resembling a final judgement on leaked software that was designed for different hardware. It's clear, though, that S Voice has been modeled very much in Siri's image, right down to the near-identical microphone icon at the bottom. The software hooks into Android and lets you set calendar events, send messages to contacts, get Wolfram Alpha-powered answers to questions, find out weather forecasts, and so on. Voice recognition was mostly solid, but we had a few problems getting it to parse various names, and "The Verge" remains a common stumbling block for this kind of software. S Voice's voice itself is a coldly mechanical female affair, some way away from Siri's personable and slightly coquettish mannerisms (or indeed the dulcet male tones found in the British version). 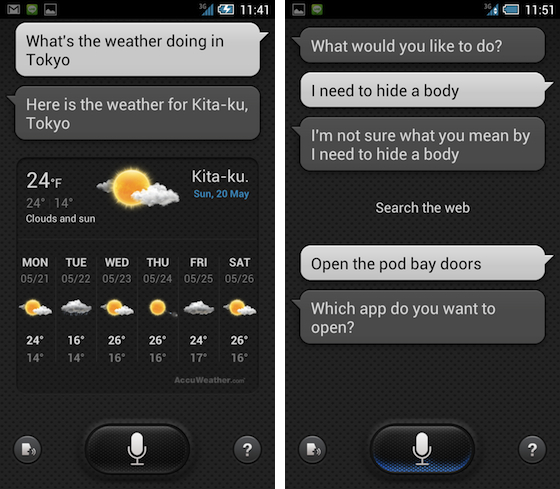 It also seems that S Voice isn't quite as attuned towards natural speech as Siri. For example, whereas Apple's service will helpfully respond to vague statements like "I'm in the mood for Italian food," S Voice won't offer any advice beyond suggesting a web search. Even a more direct question like "Where's a good Italian restaurant?" sends you to Google, and the tutorial advises using much less fluent syntax such as "Text Katie message are you free tonight for dinner." S Voice doesn't make much effort to indulge more esoteric queries, either, though it does at least tell you that the meaning of life is 42.

Overall, S Voice is the closest approximation of Siri we've seen (in English, at least), but it's not quite as fluid — at least in its current form. We're looking forward to giving it, and the rest of Samsung's Nature UX, a fuller workout when we review the Galaxy S III itself.