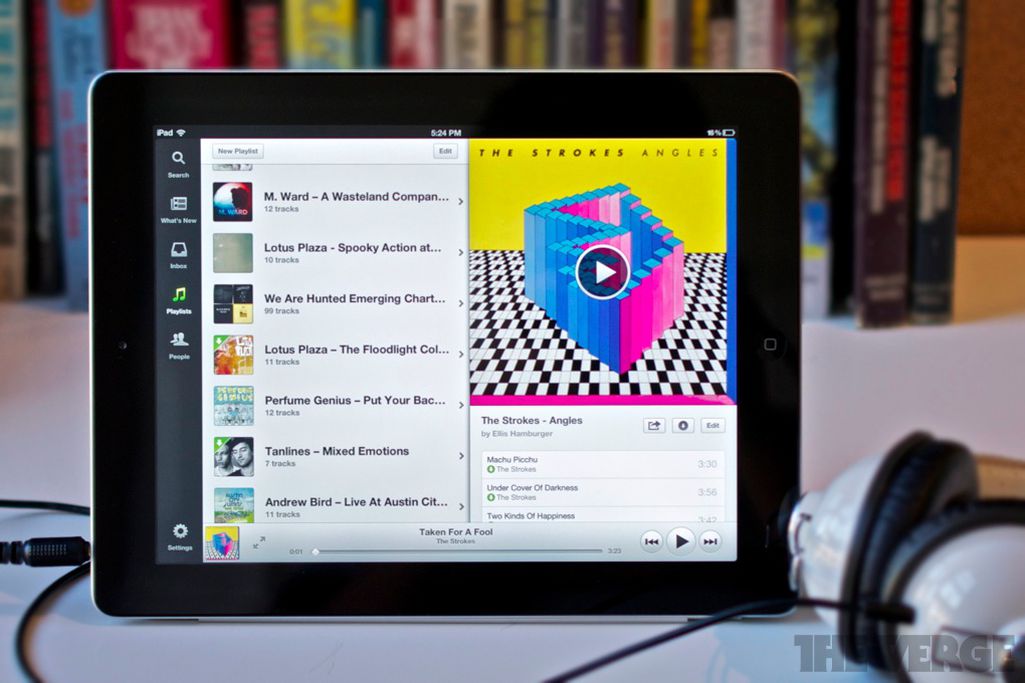 A couple weeks ago, Spotify and Coca-Cola held a press conference in New York where the two companies partnered on a deal to use Coca-Cola's worldwide brand recognition to bring Spotify to hundreds of new countries. Spotify would be featured prominently in beverage ads, as well as on Coca-Cola's Facebook page, which pushes out daily updates to over 41 million people. At the end of the press conference, Spotify CEO Daniel Ek and a few Coca-Cola executives asked for questions from the crowd, which was comprised almost entirely of journalists. A hand shoots up. "When's the iPad app coming out?" one reporter frantically asked. Ek smiled and shifted in his seat like a friendly dog poked one too many times.

Spotify had just announced one of its biggest partnerships ever, a deal that could broaden Spotify's audience tenfold and all anybody cared about was the company's iPad app. When would it come out? What would it look like? The press begged at Ek's feet.

"It's in the works," he squeaked out. A couple weeks later (and almost three years after Spotify debuted its iPhone app), the iPad app is finally here. And it's stunning. But does it bring anything new to the table?

Read on to find out. 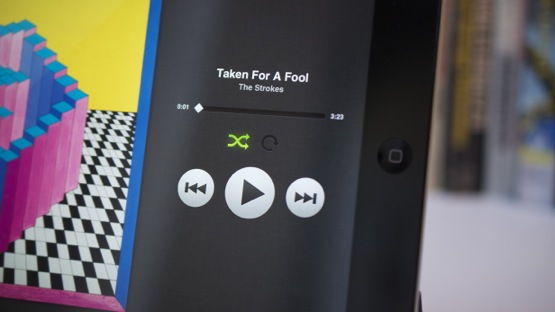 "It's the same OS, but the use case is entirely different," Spotify's Director of Product Charlie Hellman told me, speaking to how the company views Apple's iPad. "We didn't want to do a simple port, because we imagine two use cases: this app as a legitimate replacement for your home stereo, and this app as a way to navigate the world of music on a nice afternoon." The app is both of these things. For better or for worse, Spotify for iPad is exactly what you'd expect: a Retina-optimized, agile, and green-hued Spotify client that's perfect for browsing content while you're on the couch.

When you first open the app, you'll immediately feel at home with the Twitter for iPad-inspired left navigation bar and paned pages you can swipe through. Tap a song, and in typical Spotify fashion, it immediately starts playing. The app is, of course, still focused first and foremost on playlists, Spotify's solution for organizing your content. Playlists are displayed alongside pretty album icons in a vertical list. You can create and remove playlists, but you cannot rearrange or rename them like you can on Spotify for Mac or PC. Tap a playlist and a new pane pops out containing it. I tried tapping through pane after pane (by checking out the Related Artists area), but couldn't get the app to crash. "The stacked interface is catered to touch and creates a kind of endless navigation," Hellman said. "There should never be a dead end." Spotify wants you to to backtrack and see exactly how you arrived at the music you're currently listening to.

Tapping and holding a track brings up a menu where you can star, add, share, and queue up a song, as well as view more by the same artist. A progress meter and playback controls live inside a persistent bar at the bottom of the app, as well as on your iPad's lock screen if you double-tap the home button. Inside the player bar, there's a button symbolized by two arrows that launches a beautiful full-screen "Now Playing" interface. Depending on how your iPad is oriented, you can swipe vertically or horizontally on a song's album art to switch songs, and there's also a convenient AirPlay toggle next to playback buttons. Tapping the screen and then "Hide" removes all UI chrome so you're left with just your album art and music controls. "We've visually gone bigger than we ever have — on any OS," Hellman said as he beamed at his iPad, pumping music wirelessly to a Jawbone Jambox.

Hellman is most proud of the app's new Now Playing screen, which essentially turns your iPad into an understated music machine you wouldn't mind having in your living room. Another elegant detail is the pie icon that appears in your left sidebar while you're downloading music. As the pie fills with Spotify green, an arrow pulses and cycles to indicate songs are downloading. Once your download completes, the pie disappears. 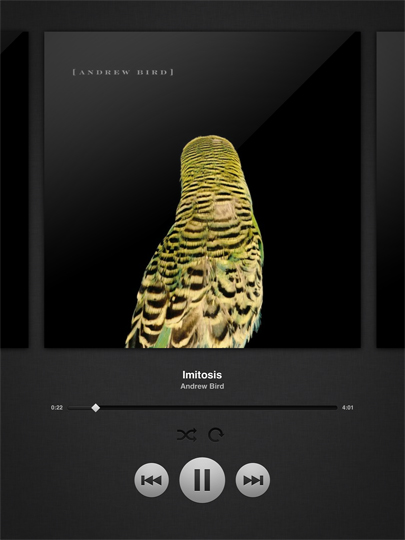 One feature that's been revamped for both iPhone and iPad is a universal search bar, which takes your query and populates albums, artists, playlists, and songs, in real-time as you type. If you're not connected to the internet, the search bar populates results from tracks and playlists you've saved to your device. Another minor but noticeable change is the way your Inbox is laid out. In the new version of Spotify, your inbox contains songs shared with you categorized by sender instead of chronologically, like how the Messages app works in iOS. This way, it's easy to see a whole list of songs that one person has sent you, but unfortunately, there's no going back if you like the old way better.

A pretty face cannot come close to saving Spotify's abysmal "What's New" page, which is meant to help you see what friends are listening to and is largely unchanged from the desktop app. The page contains a touch-friendly carousel of albums "Recommended" to me, but I can't figure out how any of the albums were recommended. Below, you can find just five trending playlists and five top tracks among your friends. Below that, you'll find a small grid of twenty "New Releases," a tiny subset of Spotify's 10,000 or more tracks that get imported each day. And I have no idea when these new releases launched. This week? Yesterday? Two weeks ago? Frankly, I'd be happy enough with the desktop app's live feed of what friends are listening to, but that's not here either.

In quite stark contrast, Rdio (and its iPad app) provide the complete opposite experience — an interface that's quite useful for discovering music others are listening to but haven't necessarily plopped into playlists. Rdio contains a Heavy Rotation section (for albums played frequently) and Activity section (a news feed, of sorts). Within each of these sections, you can choose to view albums oft-played by You, Your Network, or Everyone. Then, there are the New Releases and Top Charts sections, which have three subcategories: top albums, top songs, and top playlists. Within each category, you can view results within the last day, last week, and through all time. There's a lot of flexibility in exploring the taste of those you know and follow. 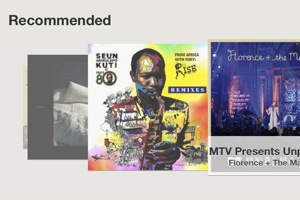 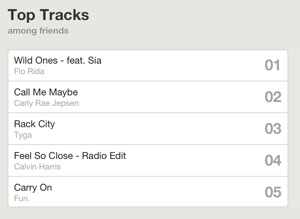 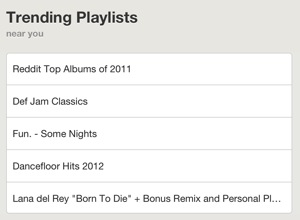 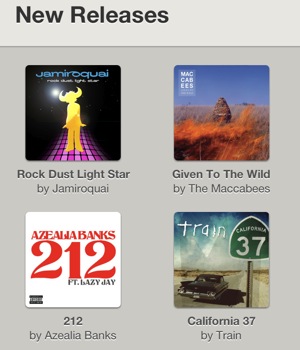 Spotify's universal app launching today includes a few new settings that should please music buffs and casual party DJs. First off, you can choose to stream and/or sync in "Extreme" 320 kbps quality. Second, you can now adjust how many seconds of crossfade occur between tracks, which is useful if you leave Spotify on and just let it play. Lastly, you can now turn gapless playback on, though we can't imagine why you'd want it turned back off. Additionally, the app still lacks the Spotify apps that launched in November 2011. Spotify apps are not much more than packaged HTML5 applications (as we were told at SXSW by Spotify's Chief Content Officer Ken Parks), so we're not sure why they're absent — especially considering how hard Spotify has pushed apps on the desktop.

While Spotify's iPad app is truly excellent at what it does, I can't give it a pass for exhibiting many of the same faults I have with Spotify's iPhone app, Android app, Mac app, Windows app, etc, etc. The useless What's New section, inability to see your Play Queue, and lack of sorting options make the app harder to use, as competent and complete as it is by Spotify's standards. If you know exactly what you want to listen to, the app will make you happy — but it's quite poor for discovering new music.

Perhaps most importantly, it seems like Spotify has deliberately decided to keep playlists as the sole means of organizing content instead of a unified "Collection" that lets you view songs you've saved by artist, album, and inside playlists you've created. Only being able to save content via creating playlists is a long out-moded method — just ask iTunes, Grooveshark, Rdio, MOG, Amazon, and just about any other company that offers music jukebox software. I hoped that this feature, among other things I've mentioned, would pop up in the company's iPad version — especially since competitors have had some of these features for years. So while Spotify's iPad app and catalog are both exceptionally solid, the company's product-related priorities are confusing. It spent months building a beautiful and speedy iPad app that will elate Spotify users but doesn't actually do anything new for discovering music. In short, it's exactly what we expected and nothing more.