Charting the futures of science fiction

Stephanie Fox of io9 has charted how far into the future science fiction was set during different decades.

Share All sharing options for: Charting the futures of science fiction

Everyone who reads science fiction can probably name some of the movements and fads that have come and gone in the last century. Stephanie Fox of io9 has gone a step further and actually analyzed the distance into the future that science fiction was set during different decades. Fox collected 250 random works of science fiction (in book, movie, TV, and comic form, although it's limited to works readily available in America) created between 1880 and 2010, then charted roughly how far into the future they appeared. Pieces are divided into three categories. Near-future works, set up to 50 years in the future, are typified by books like 1984 and Neuromancer. Mid-future works are set up to 500 years ahead, presenting new societies or tech but characters who are recognizably like us. Far-future works are things like The Time Machine, in which our world is radically changed or even unrecognizable. 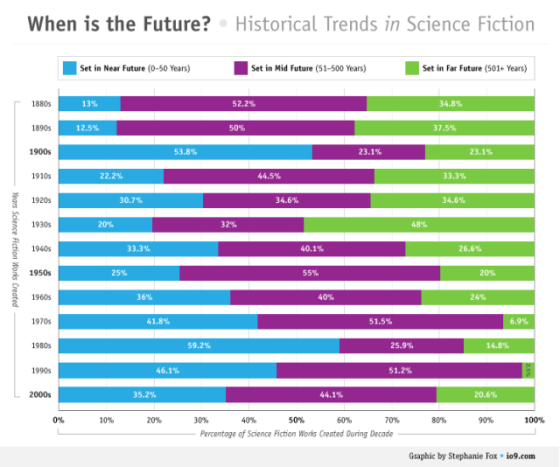 We imagine plenty of things don't fit these categories (where does alternate history go, for example?), but the chart gives us a fairly interesting first look at how we prefer to view the future in a given decade. Near-future works, for example, were rare in the early days of SF, only to suddenly spike at the end of the 19th century. Meanwhile, the Depression-era 1930s saw a large number of works set in the distant future. As a caveat, though, we'd be a little wary of just-so rationalizations based on these. The sample size is sizable, but the availability of the works now doesn't necessarily mean they're representative of the decade they were released. io9 has some interesting analysis, but we'd take all of it with a grain of salt.

If you're all right with focusing only on latter-Twentieth Century SF and allowing for some more genre classifications, an equally interesting experiment would be to focus solely on recipients of the two biggest awards in science fiction: the Hugo and Nebula. Awarded since 1953 and 1965 respectively, the two prizes are an incomplete but worthwhile proxy for books, stories, or scripts that were considered important at the time they were written. There are probably also any number of similarly interesting metrics to look for. When do we prefer hard vs. soft SF, for example, and how do we look at specific subgenres (like post-apocalyptic SF) during different times?