NTT Docomo is working on a system to let you view phone notifications on separate screens, from those in public places to the privacy of your own home.

NTT Docomo is working on a system to let you view phone notifications on separate screens, from those in public places to the privacy of your own home. The system will work over Wi-Fi or Bluetooth, and there are two main use cases envisioned. The first is pretty simple — as in the image above, the Japanese carrier plans to enable pop-up notifications on your home computer screen for phone information such as missed calls. The second is the same basic idea, but expanded to cover public screens such as video billboards and in-store kiosks. It's supposed to save people the trouble of taking their phones out of their bags or pockets.

If you're understandably thinking that you don't want your contact information being shown on six-foot monitors in shopping malls, Docomo will let you opt out of those messages. It's also expected that the service will be used for less personal information such as the number of points left on a store loyalty card, or to alert registered customers of special offers. A further layer of abstraction is provided by the identifying avatars, which can look as much or as little like you as you want. Docomo hasn't announced any partnerships yet, nor is it committing to a release date for the PC software, but apparently it'll be easy to implement the technology once the carrier does go forward with a rollout. 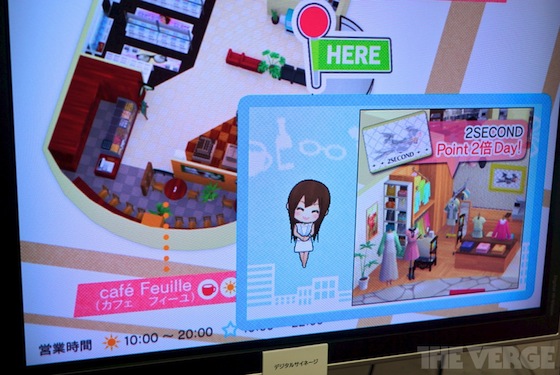