CEO David Karp on how Tumblr ads will work, and why he hasn't coded in six months

At the TechCrunch Disrupt conference in New York today, Tumblr founder David Karp took a few minutes to explain how Tumblr's going to make money, what's changed since President John Maloney left the company, and why Facebook and Pinterest are more of a boon to Tumblr than you'd think.

Share All sharing options for: CEO David Karp on how Tumblr ads will work, and why he hasn't coded in six months

At the TechCrunch Disrupt conference in New York today, Tumblr founder and CEO David Karp took a few minutes to explain how Tumblr's going to make money, what's changed since President John Maloney left the company, and why Facebook and Pinterest are more of a boon to Tumblr than you'd think. He also spilled the smallest amount of beans required for us to infer Tumblr's finally working on an iPad app.

"Anything can perform equally well as long as it's great content."

Host MG Siegler first pressed Karp on his company's new "highlight" feature, which lets users pay a small fee to pin a post to followers's feeds. The feature recalls Twitter's "promoted tweets" ad space, as well as Facebook's "highlight," which it only began testing recently. Karp quickly dismissed the notion that the feature is anything like ads on Facebook or Twitter. He said that Tumblr is inherently "built around creative brand advertising, which is something that Facebook and Google don't support." So what makes highlighted posts more compelling than news feed ads on Facebook? "Given that we have such a creative community," he said, "the products we're building work well for storytelling, and we've tried to build them in such a way that they do scale from a big brand cutting a check for $100,000 to a person proud of their post and wants to highlight it for five dollars."

For Karp, the killer feature is simply that people and brands on Tumblr will be more creative about advertising than they will on other social networks — almost like how you imagine Instagram could've pitched investors. Tumblr's four-year-old "radar" box that appears in the right rail, Karp says, shows that "anything can perform equally well as long as it's great content." The radar box is located in the same place as Facebook's ads — but Facebook has recently began tinkering with News Feed ads from brands and people you follow. 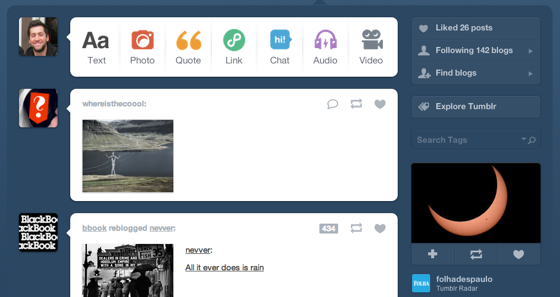 "It's troubling when an AmEx ad is inline," Karp said, "but if it's a friend's link that wants to make sure you saw a big event he's having that night, then you have a different relationship to that content." Tumblr's highlight feature induced skepticism from fans, but Karp hopes people remember that you'll only see highlighted posts from users you follow — like how Facebook structures News Feed ads. So really, the two ad spaces aren't so different at all.

Karp also spoke about companies like Facebook and Pinterest as product rivals, and not just as points of comparison for monetization schemes. "We've tried so hard to not view anybody in the ecosystem as a competitor, and that's served us very well this far," he said. "We've tried to embrace these platforms as syndication platforms — pumping out content to those platforms has generally worked," Karp said. Need proof? "Facebook and Twitter make up more inbound traffic to Tumblr than Google," he proudly stated. It seems that Tumblr has carved out an impressive niche where people return to it to see high quality images, videos, and other content. On the other hand, many people browse Pinterest without ever checking out source links for images.

To conclude the "fireside chat" session, Karp hinted at where Tumblr's heading next. "We are hustling to make sure all of our mobile apps are where they need to be. We'll show you some things we're proud of in the next few weeks," he said. Perhaps he's speaking of the iPad app the company has been so sorely missing, but maybe he's has been a bit stubborn about creating an iPad app for other reasons. "I don't think the original vision [for Tumblr] would've been as meaningful on mobile platforms," he hinted, but didn't explain what he meant. The guy clearly has a lot on his mind — especially since President John Maloney left the company in late April. "The last six months have been John making sure we're on the rails and that this is a team we can really trust. I was writing code six months ago but haven't committed anything since," Karp says with the half-grin, half-grimace that seems exclusive to hoodie-wearers forced to transition from creating code to running a business. "It's discouraging, but I find little opportunities to hack."