When Eric Demers left his job as CTO and VP of AMD's graphics division, rumors immediately popped up suggesting that he would be moving to Qualcomm. And while the company has yet to make an official announcement on the hiring, it appears as though Demers has already confirmed his new gig — via a Facebook post. On Friday tech analyst Pat Moorhead wrote a message congratulating Demers on being hired by Qualcomm, which Demers both Liked and commented on, suggesting that it's indeed correct. Meanwhile, Tom's Hardware is already reporting on Demers' new responsibilities. While we don't know his new job title, he will reportedly be in charge of managing the Adreno graphics team — a group that was once a part of AMD during Demers' tenure, prior to being purchased by Qualcomm in 2009. 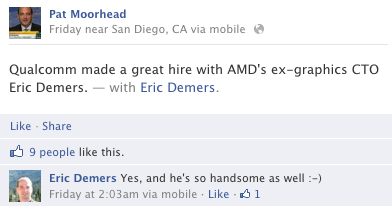